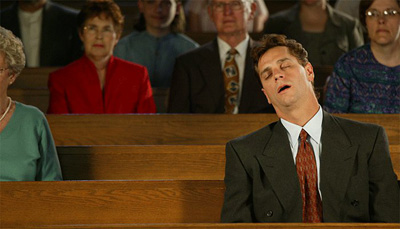 Hemet, CA – Four Sundays ago, Rev. Carl Swenson, the founding pastor of First Assembly, one of Hemet’s largest churches, told his congregation that it would be three Sundays before they would gather together again for worship. An audio recording of the sermon revealed that Swenson is deeply concerned about the increased spiritual shallowness of his congregation, and felt that drastic measures needed to be taken in order to bring them back to a place of true and genuine spiritual vitality.

“We’ve seen this with the Lord’s Supper too, haven’t we?” Swenson asked his contrite parishioners. “We used to do that every single week as a church, and do you all remember what happened?  Before we knew it, communion turned into a dead ritual and we were all just going through the motions.”

Swenson went on to describe how just about everything else they were doing on Sundays had fallen prey to the same dead ritualistic patterns.

“We sing an opening hymn, then we greet one another, we pray, we share announcements, then we sing a fast song, a slow song, and then a really slow song, then I preach, we have a responsive prayer, and yes – sometimes people give their lives to the Lord, but I suspect it is in spite of what we’re doing, and not because of it.”

Swenson explained that the rationale behind the change in the church’s meeting schedule mirrored the same direction that they had already taken with communion. “We have decided that waiting three extra weeks – as we do with communion – would help us to break out of our religious mould” he explained.

Witnesses who attended the first once-a-month meeting said that things seemed to be getting better. The service began with an opening hymn, congregants greeted one another, they prayed, shared announcements, sang a fast song, a slow song, and then a really slow song, pastor Swenson preached, communion was celebrated, and everything was followed by a responsive prayer. Two people gave their lives to the Lord, but there was a strong sense that this time it was because of their deeper commitment to be led by the Spirit rather than being trapped in the dead ritualism they broke out of during the previous month.

In his closing remarks, pastor Swenson encouraged the congregation that he could see a real change, but he gently warned –

“Only time will tell if our revived hearts stay revived.” –  ChristianSatirePost