The Legend Of The Perfect Christian Family (1 of 8) 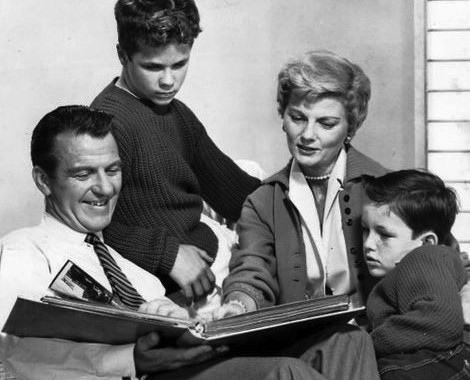 It is pretty common for us in our own moments of guilt and weakness to look out into the lives of others and project on them the perfect image of life that we ourselves can not achieve. I remember in my own life as a young boy experiencing the fallout of a bad divorce. During this period of our family’s life everyone of us in the family were wrestling with guilt, loss, anger, weakness and to some extent a sense of failure. We all dealt with it in different ways.

I remember a couple of times my mom woke us up at night after we had gone to bed and fallen asleep. She wanted Spring and I to come down stairs with her and watch T.V. with her. The show was little house on the prairie. I never really understood why she did that until I became a parent and became aware of what it means to experience the curve balls of life with Children of my own. Just as life didn’t turn out the way I expected or had hoped as little boy in regards to my family. The reach of my mother toward the weighty dream she had for us as a family slipped from her fingers. So there was my mom with her young children late at night projecting this dream of hers onto the T.V screen (as I have done many times) in the form of The Little House on The Prairie. That night we would allow Laura Ingalls Wilder to deliver us from our own guilts and fears with her own redemptively idealised version of her childhood.

My hurting mom After a messy divorce and several other serious trials and tribulations in her own broken but noble way wanted my sister and I to see and be shaped by that which she considered at that moment to be perfection.

It wasn’t until years later in my late 20’s that I began to recognize this rhythm of projected idealism at work among Bible believing Christians and in my own life as well. As a young pastor I was shocked at how messed up the families in the Bible were. I was actually overwhelmed and at the same time deeply blessed to see the Bible wasn’t full of Little House on The Prairie families but something more like some kind of indissoluble mashup of The Simpsons, The Osbournes, Breaking Bad, Trailer Park Boys with a dash of The Brady Bunch. This book had been poorly presented to me as a book of virtuous Leave It to Beaver Like Families by folks seeking to do the same thing we did as a family while watching The Little House on The Prairie. But I feel for it without question because in my pride and foolishness I figured the perfection to which I so eagerly reached for as a husband and father I could also grasp.

Faith might be my ability to reach but grace is for my inability to grasp. This the very heart of what I have learned from Ephesians 2:8-10.

This is the first article of an eight part series called The Legend Of The Perfect Christian Family. In this series I hope to show that some of the greatest family contexts in the Bible are deeply broken and in need of God’s grace. In this first article we will learn that God’s reach does not exceed his grasp of Sarai and Hagar.

I cannot think of a better place to start than God’s interaction with two women Sarai and Hagar.

Sarai was a wife whose womb was without form and void.

Sarai was childless and barren. In Genesis 1-11 we see God’s blessing on human fertility when he says “be fruitful and multiply”. In Genesis three we find this very good unbroken beginning of God’s original to become broken and stained with the curse of sin. As an immediate picture of this poisoned blessing in Genesis 11:29-30 we find Abram’s wife to be barren and childless. This is a story just waiting for grace and blessing isn’t it? Sarai was a woman considered worthless in her time because of her inability to have children. She was truly considered cursed by God among her people. She was reaching for that which she could not grasp.

In Genesis 12:1-3 God speaks over the Abram and applies the same life giving redemptive power of The Word we saw in Genesis 1:1 to Abrams barren and childless situation. Because God speaks over Abram alone it seems Abram believes that he will father a son, not that Sarai will bear a child. Abram soon attempts to ditch Sarai twice. Once to Pharaoh and another time to a king. Because of her bareness Sarai is unimportant to Abram. SO not only was a women Sarai was childless and barren now she was a woman who couldn’t even be a part of God’s plan. So like some storyline straight out of a soap opera Abram under the encouragement of Sarai fathers a child by his wife’s servant slave girl Hagar.

Will Abrams new son via Hagar become the child of promise for Abram? Let’s stop here for a moment though a look at this woman Hagar.

Hagar was an Egyptian slave girl who was seen and heard by God.

Hagar is Like a pawn in Sarai’s hand. Picked up in Egypt during one of Abrams failed attempts to save himself. Hagar was Sarah’s Egyptian slave girl. Probably a present to Sarai from Pharaoh. Because the custom in those days Hagar was Sarah’s property and anything she had belonged to Sarai. So Sarah thought it would be a good idea to have a child for herself by Abraham through Hagar. As you can imagine this didn’t go well.

Sarai’s plan soon backfired. Because Hagar wasn’t acting like a good slave should. Sarai became more and more harsh toward her Egyptian slave. Hagar became more and more bold. This pawn in her master’s hand had now become somewhat of a queen. With this child that she had now brought to the family for the first time in her life Hagar has some identity beyond servant she was no longer just a slave girl but the mother of Abram’s son Ishmael. With this comes leverage. But things don’t go well for her and it seems as if Hagar caught in the middle of this mess had now on the behalf of her boy become a husbandless mother whose reach to be seen and heard had exceeded her ability to do so.

But God who is mighty to save brings life from lifelessness and at the same time looks upon the overlooked.

Sarai and Abram, as it is with everyone who comes into personal contact with God’s unfolding plan of redemption, seem to have a hard time waiting on the lord. If Abram would have only waited on God’s plan to unfold so much heartache would have been avoided. In Genesis 17:15-16 we find that God’s great plan does involve sarai. As a matter of fact God tells Abram to call his wife princess (Sarah) now because she was the one that would bear the child of promise.

The womb which was once without form and void, a wilderness and dessert was now to be like Eden the garden of the Lord. Sarah a woman reaching out to God in such a broken situation was grasped by the redemptive and transforming grace of God.

Hagar, a woman caught in the middle of a broken family practicing their faith in broken ways wound up with a child. She was a woman outside of the promise of God it seemed. She was an expendable slave. But yet in the midst of her feelings of worthlessness and being lost she personally encounters God twice Once in Genesis 16 and again in Genesis 21. In a story where it seems like she has been lost and forgotten God see’s her and hears her. She is so moved by this encounter that she calls this God who speaks to her “The God Who Sees” and names her son “God has heard”.

A single woman, with no rights of her own and an experimental baby is given the promise of descendants and speaks directly with God twice! A woman so lost that she can’t even reach anymore is caught up by the reach and grasp of the God who sees and hears.

Families like these are what we find in the Bible contrary to popular opinion. Whatever God reaches for he can hold onto. Every family’s reach exceeds its ability to grasp. Sometimes a family can be so lost and broken that it might not even seem that they are reaching but God is. I think we see this at work clearly in the story of Sarai and Hagar.

When I was a kid and I tore my pants my mother would sew them or patch them. Any thoughtful person that would look at my jeans would see past the imperfections and straight into the loving, covering, redemptive nature of my mom. So it is with the Spirit of God. When we see how and where He has covered us and stitched back together our broken seems we should not see old worn out pants but a God who is full of grace. A God who gives life and a God who sees.

Is your family in trouble? Do you see other families that seem to have it more together than you do?

Every family’s reach exceeds their ability to grasp. Call out to the God of Sarah and Hagar. What he reaches for he can hold onto. Rather than looking for perfect families look for patchwork and stitches these are the works of The Spirit and signs of grace.