The Concept Of Karma In Paul’s Theology Of Giving? In 2 Corinthians 8 – 9:15 Paul is asking the rather large and wealthy congregation in the ancient city of Corinth to begin taking a collection for the poor and afflicted church in Jerusalem. It is truly a beautiful portion of Scripture that helps us understand today how and why we ought to give as disciples of Christ.
In 2 Corinthians 9:6-7 we find a well known passage in which Paul brings up this often misunderstood idea of a “cheerful giver”. 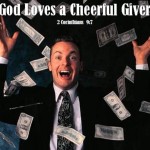 He says the following: “Remember this – a farmer who plants only a few seeds will get a small crop. But the one who plants generously will get a generous crop. You must each decide in your heart how much to give. And don’t give reluctantly or in response to pressure. For God loves a person who gives cheerfully.”

This passage, from my experience, is one that really needs some explaining. If isolated from its context, one might assume that we should simply give in order to get. And we should do so happily. This particular view looks more like the eastern religious view of karma.

Karma, also known as “getting what you deserve” or “what goes around comes around”, is really not in harmony with the teachings of Jesus. As we read our New Testaments, we clearly see that God was in Christ reconciling the world unto himself through his crucifixion, death and resurrection. In one of the most beautiful explanations of how we should respond to the Gospel in the Bible, Paul clearly stated to the Corinth church that, because of Christ, we do not get what we deserve.
In the fifth chapter, Paul states the following in his second letter to Corinth:

“…And all of this is a gift from God, who brought us back to himself through Christ…For God was in Christ, reconciling the world to himself, no longer counting people’s sins against them… For God made Christ, who never sinned, to be the offering for our sin, so that we could be made right with God through Christ.”

The lead singer for the U2 rock band, Bono, said this about in regard to karma and grace: “The thing that keeps me on my knees is the difference between grace and karma.” Bono is saying his motivation as Christ follower for prayer and worship is that he does not get what he deserves. It is in this same vein that Paul’s is calling on the church at Corinth to give.

The Greek word for “cheerful” in our English translation is “hilaron”. This word means and is rooted in something much deeper than a feeling of happiness. It is actually rooted in the idea of mercy. The idea Paul is expressing is not “give with a cheerful disposition”, but rather “give in light of your gracious and favorable position in Christ”. Just as God has graciously not given you what you deserve, do so to others.

Why does God love a “cheerful giver”? Because whether you are sad, discouraged or even hopeful you are still spiritually thriving in a position of the unmerited favor and loving kindness of God. As one translation says concerning 2 Corinthians 9:7, “God loves it when the giver delights in the giving.” Now let’s give to others in the same way God has given to you: Without strings, extravagantly and not based on what they deserve. So the concept of Karma might not be in Paul’s theology of giving but the Gospel is.