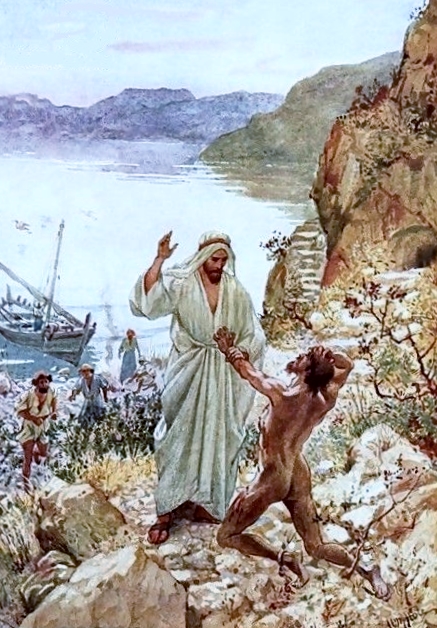 The Garasene Demonaic (Mark 5:1-20) – Having just returned from a little jaunt across the sea of Galilee, where He demonstrated His power over nature, now Jesus hits the beach and demonstrates His power over the spiritual realm.

As soon as they land on “the other side of the sea” Jesus is met by a man coming “out of the tombs” with an unclean spirit (v. 1-2). The description of this guy is pretty terrifying. He lived in the tombs (v. 3) – pretty scary. Apparently some of the locals had tried to bind this guy with chains, but he broke the shackles in pieces (v. 4)! Perhaps those who lived nearby could hear him throughout the night “crying out and cutting himself with stones” (v. 5). This guy was something to fear! But his initial reaction to Jesus is to fall down before Him, and cry out “Jesus, Son of the Most High God… do not torment me” (v. 6-7; recalls 1:24).

Now lets take a minute to look at this from the disciples perspective: They land, this crazed maniac, probably butt naked (v. 15), broken chains hanging from his wrists, comes running up to Jesus, shouting “what do you want with me” – they’ve got to be standing there with jaws dropped, wondering what is Jesus going to do?

Jesus is commanding the unclean spirit to come out of him (v. 8). Then he asks “What is your name?” – “My name is Legion, for we are many” (v. 9). How horrifying – “the full degree of distortion to which the man was subjected: not one but a multitude of alien forces had taken possession of the volitional and active ego of the man” (William Lane, 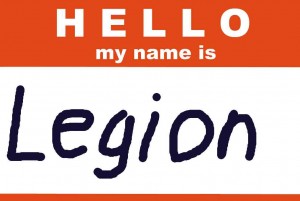 NICNT). Jesus agrees with their repeated plea not to be sent out of the country, but instead into a herd of pigs on a nearby hillside. And so there they they go, 2000 pigs running to their death by drowning in the sea (v. 10-13). Again, what an absolutely bizarre scene! For my money, the disciples are still standing their with their mouths hanging wide open (absolutely nothing in the text about any word or action by the disciples).

And now the locals get involved in the story. The herdsmen, who’ve just lost a pretty penny “over the steep bank into the sea” (v. 13) go into the city (and in the country) telling this strange tale (v. 14). Unbelievable, had they not already known about the local demonaic living among the tombs. But they come to see for themselves: ‘there he is – looks fine to me’ (v. 15). Their reaction – ‘Jesus, please depart from here’ (v. 17)! One would think they would be happy, but people fear the supernatural, even when something good is brought about by it.

Jesus apparently complies quickly with their request to get out of town (v. 18). The only one who seems to appreciate what Jesus has done here is the man (now freed from his oppressors). It would seem that he wanted to accompany Him and become one of His disciples. Instead Jesus sends him out on mission, to return home to his family and friends, telling them “how much the Lord has done for you” (v. 19)! This he did, giving Jesus all the credit, “and everyone marveled” (v. 20).

One way we can view this story is as a continuation from the previous, answering the question who is Jesus? For many commentaries and Bibles treat these narratives (4:35-5:43) as a series of three miracle stories. Who is Jesus? He is the one with power over nature, power over demons (unclean spirits), and (as we’ll see next week) the power to bring the kingdom of God into the world of humanity (on earth as it is in heaven) through miraculous physical healing of sickness and even death.

Its been a pretty good day of “fishing” (1:17) today for Jesus and the disciples, if not a wild ride. “Come and follow Me” the Master beckons… if nothing else it will be the adventure of a lifetime!

Until next time (when Kenny Burchard guest posts on Jairus and the Woman with the issue of blood), my friends – Follow Jesus! Trust in, cling to and rely on Him. Abide in Him.

Resentment is like drinking poison and then hoping it will kill your enemies.