A conversation with my 13 year old about the “rapture.” 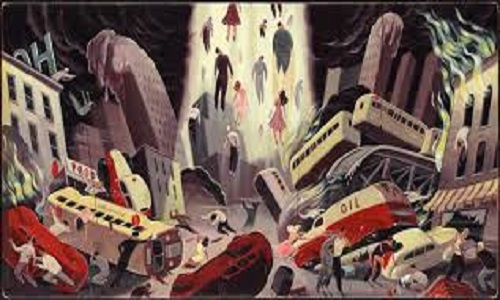 I drive my son to school every morning and we have some great conversations on the way (in addition to listening to his favorite music, which is 80s music. YES!).  This morning he wanted to talk about the idea of an end-times rapture. He said…

Dad, yesterday I was talking with my friend Austin, and he said he believes in the rapture. So I asked him if he thought terrible things would happen in the world if the rapture happens. He said, “Yes, there will be plane crashes, car crashes, and all kinds of terrible things. Every bus driven by a Christian bus driver will crash. Lots of people will be killed when God takes all the Christians out of the world. It will be a very bad scene.”

Victor responded, “That seems like a terrible thing for God to do. What about all of the innocent children that will die?”

Austin said, “No, all the children will go in the rapture.”

Victor replied, “So God will take children away from their parents, and perhaps then arrange things so that the parents will be killed or terribly maimed in a world surrounded by horrible tragedy? Does this sound like Jesus to you?”

Austin answered, “Well, God has to rid the world of all evil.”

Victor concluded, “But your idea of the rapture doesn’t sound like God will be ridding the world of evil. The way you tell it, It sounds like God is going to bring lots of evil, pain, suffering, and horror into the world, and take all of the good out of the world. I’m not so sure you’re telling the story the way the Bible tells it.”

I like Victor’s conclusion a lot! I must say that I agree with him.

Nothing in the New Testament suggests anything like Austin’s idea of the rapture. It is, and shall always be, the product of bad theology proliferated through Christian fiction. The story of how God will rid the world of evil looks more like this…

Revelation 21:1-4
1 Then I saw a new heaven and a new earth, for the first heaven and the first earth had passed away, and the sea was no more. 2 And I saw the holy city, new Jerusalem, coming down out of heaven from God, prepared as a bride adorned for her husband. 3 And I heard a loud voice from the throne saying, “Behold, the dwelling place of God is with man. He will dwell with them, and they will be his people, and God himself will be with them as their God. 4 He will wipe away every tear from their eyes, and death shall be no more, neither shall there be mourning, nor crying, nor pain anymore, for the former things have passed away.”