Spirituality without On-going Repentance is *Not* Christian Spirituality 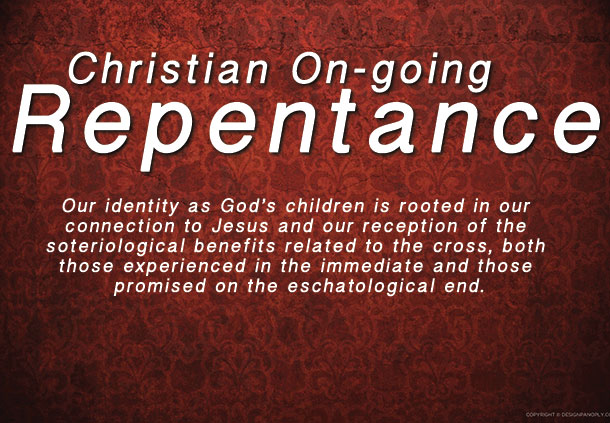 “Christians don’t need to repent,” said the young man. “Jesus died for our sins… past, present, and future,” he continued, “so you don’t need to spend all of your time asking him for forgiveness. He has already forgiven you!” According to this young man, all the Church needed to do was lean into its identity as righteous daughters and sons of God!

Part of me agrees with some of the points being made by those who make these types of statements. It is absolutely appropriate to place emphasis on the Christian’s ontology, namely our union with Christ. Our identity as God’s children is rooted in our connection to Jesus and our reception of the soteriological benefits related to the cross, both those experienced in the immediate and those promised on the eschatological end.

Again, there are serious problems with these two ideas, both on a biblical-theological level as well as on a practical level. Let’s take a look at some of the reasons why these ideas are short-sighted in the long run and, quite frankly, unhelpful for Jesus followers…

These views fundamentally undermine explicit statements from the Bible.

The New Testament, originally written in Greek, uses the word metanoia, which is translated as “repentance” in a number of  verses that are contextually related to Christians. For example:

“Look how far you have fallen! Turn back (metanoeo) to me and do the works you did at first. If you don’t repent, I will come and remove your lampstand from its place among the churches.” (Rev. 2:5 NLT)

“Repent (metanoeo) of your sin, or I will come to you suddenly and fight against them with the sword of my mouth.” (Rev. 2:16 NLT)

“Go back to what you heard and believed at first; hold to it firmly. Repent (metanoeo) and turn to me again. If you don’t wake up, I will come to you suddenly, as unexpected as a thief.” (Rev. 3:3 NLT)

“I correct and discipline everyone I love. So be diligent and turn (metanoeo) from your indifference.” (Rev. 3:13 NLT)

And this says nothing about the relevance of Romans 2:4 and 2 Peter 3:9, which I believe are written in a way that all early Christian readers would have understood as teaching them to be repentant. Scripture indicates that Christians can and should repent when their lives are not reflecting the qualities and characteristics of the kingdom. This is not a debatable matter of Revelation is allowed to speak.

These perspectives remove the historic / orthodox appropriation and application of the “Lord’s Prayer.”

Quite simply, if one makes the arguments that suggest the Church need not involve itself with repentance, the natural consequence is to remove the Lord’s Prayer from the liturgy of the Church. Either you can join the historic Church and petition of the Lord to “forgive us our sins” (Matt. 6:12) or not. Either you can obey the Apostle James’ command (imperative mood) to “Confess your sins to each other and pray for each other” (James 5:16) or not.

And here is the catch. This false teaching is not new to the Church. It has found advocacy in, for example, aspects of Marcionism, the Antinomianism controversies, and within the Latter Rain movement. Each of these theological errors were rejected by historic Christianity. Therefore, those who advocate an approach that removes “repentance” from the life of the Church, which  is so clearly at odds with the Great Tradition, must provide some serious exegesis in order to convince Christians to abandon such a firmly held belief.

These ideas lack clarity and comprehensiveness on the work of the Spirit.

When someone suggests that nowhere in Scripture is the Spirit said to convict Christians, we need to hit the “pause” button and ask some important questions. What texts indicate that “conviction” is only for unbelievers? And how is one defining “conviction” within this framework? Might there be other words that shape how we understand the Spirit’s “convicting” work?

A comprehensive pneumatology would seem to find the suggestion that the Spirit does not convict Christians to be highly questionable. Such a view, I think, posits a narrow view of repentance, not to mention that a logical consequence is a “low-pneumatology.” While those who make this argument would pride themselves on being “people of the Spirit,” it is troubling that their pneumatology essentially boils down to “conversion” and “empowerment,” overlooking that numerous other pneumatic qualities and activities.

Moreover, when the Apostle Paul writes, inspired by the Holy Spirit, to rebuke Christians, are we to understand that the Holy Spirit is not at work bringing conviction? Writing to Timothy, the apostolic representative in Ephesus, the Apostle Paul said, “As for those who persist in sin, rebuke them in the presence of all, so that the rest may stand in fear” (1 Tim. 5:20 ESV). Did you catch that? Paul says that the public rebuke of Christians may function to cause other Christians to be afraid! This isn’t to say that some take “rebuking” to an unhealthy extreme or that all situations require a public “rebuke.” But one can’t deny that “apostolic Christianity” contained an emphasis and practice of the “rebuke” (cf. 2 Tim. 4:2; Titus 1:9, 13; 2:13, 15). Is it possible that the Spirit’s conviction of Christians would be for the same intended purpose of apostolic rebukes? I think so.

In my opinion, this issue is a central issue that, at it’s core, has dramatic effects on the nature of the gospel and the nature of the Church. We need, if anything, to understand that our identity in Christ is rooted in our “now and not yet” understanding of the process of salvation. These concepts need not oppose each other! We can, after all, have a both/and approach.