Two Swords at The Passover. A Gun in the Garden? 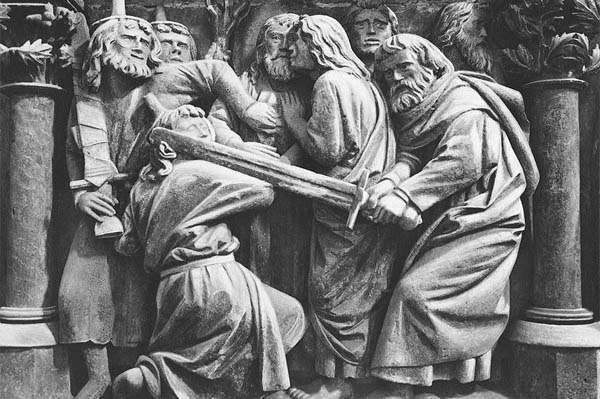 The title of this post flows from intermittent and occasional online exchanges that I have engaged in with fellow believers. A regular topic of discussion involves whether or not there is any New Testament encouragement for followers of Jesus to use weapons to defend themselves, and even to kill someone who is being violent toward them.

To begin with, there are two things I won’t do.

“I am  not saying that you can’t own a weapon, or that you should not defend yourself, your loved ones, or other people who are the victims of violence. But I am saying that I see no legitimate way to use anything that Jesus has said to advocate for the use of violence as a way of stopping violence.”

I am content for now to let the tension between those two ideas be there, and to live within the tension as I continue to learn and grow in my understanding of things.

One of the closing scenes in Luke’s Gospel finds Jesus sharing parting words with his disciples. Only in Luke do we read what is found in Luke 22:35-38. Here is my translation of the text.

I titled this post Two Swords at The Passover. A Gun in the Garden? precisely because my friends who use the above text to affirm self defense and gun ownership can actually see guns in a text about swords.  It’s true! Their rationale is that Jesus said to buy swords. But (they reason), swords were the self-defense weapon in the days of Jesus, just as guns are the weapon of choice in our generation. Thus (they believe), Jesus is essentially affirming the use of guns in this text, and is perhaps even affirming the 2nd Amendment to the U.S. Constitution. Therefore, we may see, if we wish, swords being discussed at the last supper, and we may just as well see the disciples pull out guns to shoot Jesus’ enemies at his garden arrest. In this rationale, guns and swords have the same purpose: self defense. And Jesus (they conclude) is affirming their use for this purpose.

There are three primary opinions on the meaning of Jesus’ words, “buy a sword” at the end of v. 36.

First – Jesus is issuing a command. The disciples are to sell their cloaks and buy swords.

Second – Jesus is using a metaphor. The disciples will face great difficulties, and they will need to arm their minds and hearts with truth in order to survive the coming ordeal.

Third – Jesus is using hyperbole. The disciples are about to be accused (along with Jesus) of being criminals. Seeing the inevitability of this, Jesus says — “You might as well look the part.”

With respect to the first two options, nothing in the teaching of Jesus, the example of Jesus, or the behavior and teaching of the disciples in Acts or in the Epistles or even the martyrdom scenes in Revelation indicates that Jesus’ followers ever used weapons to defend either themselves or others against violence. The only exception in all of the New Testament is found in Lk. 22:47-53, Jn. 18:10-11, and Mat. 26:50-52 which will be discussed a bit later.

Further, while the idea that Jesus is using a metaphor with his disciples about arming their minds with a sword of spiritual truth in order to survive in a coming persecution connects to other N.T. ideas (cf. Eph. 6:17), it seems to require Jesus to be excessively abstruse.

The idea that he is using hyperbole seems more reasonable to me, and so I will provide a brief rationale as to why it seems to be a strong interpretive conclusion in what follows.

A legitimate case may be made for interpreting the words of Jesus as hyperbole based on the grammatical structure (specifically the subordinating conjunction and clause λεγω γαρ υμιν) at the beginning of Lk. 2:37.

The principal element at the end of Lk. 2:36 is αγορασατω μαχαιραν (let him buy a sword) is followed by the subordinating element at the beginning of Lk. 2:37 that begins with λεγω γαρ υμιν (for I say to you).

The subordinating conjunction, γαρ, denotes the reason, cause, or concession within the primary element, and thus ties the end of Lk. 2:36 to the beginning of Lk. 2:37 which can thus be read…

Let him buy a sword, because what is written about me must be fulfilled.

If the rationale for interpreting Jesus’ words as hyperbole is reasonable, then we might understand Jesus to be telling his disciples something like:

There is further merit to this perspective within the narrative, as Luke seems to provide a fulfillment scene in both the actions of the disciples and the words of Jesus in 22:49-52:

49 And when those who were around him saw what would follow, they said, “Lord, shall we strike with the sword?” 50 And one of them struck the servant of the high priest and cut off his right ear. 51 But Jesus said, “No more of this!” And he touched his ear and healed him. 52 Then Jesus said to the chief priests and officers of the temple and elders, who had come out against him, “Have you come out as against a robber, with swords and clubs? (Emphasis added)

But Jesus does not envisage bandits as the kind of people against whom his disciples would require protection; they themselves would be lumped together with bandits by the authorities, and they might as well act the part properly and carry arms, as bandits did. Taking him literally, the disciples revealed that they had anticipated his advice: they already had two swords. This incidentally shows how far they were from resembling a band of Zealot insurgents: such a band would have been much more adequately equipped.[1]

Some repeated (and other) conclusions…

There is much more that can be said about these verses in Luke’s Gospel. Several things seem obvious to me.