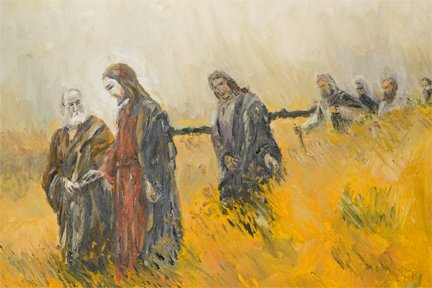 23 One Sabbath he was going through the grainfields, and as they made their way, his disciples began to pluck heads of grain. 24 And the Pharisees were saying to him, “Look, why are they doing what is not lawful on the Sabbath?”25 And he said to them, “Have you never read what David did, when he was in need and was hungry, he and those who were with him: 26 how he entered the house of God, in the time of Abiathar the high priest, and ate the bread of the Presence, which it is not lawful for any but the priests to eat, and also gave it to those who were with him?” 27 And he said to them, “The Sabbath was made for man, not man for the Sabbath. 28 So the Son of Man is lord even of the Sabbath.” – Mk. 2:23-28

Church rules and church police to enforce them. Does your church have these? Many churches do.

At the previous church I served one of our associate pastors was a retired former lead pastor who came to help us, and he told me one day that “brother so-and-so seems to have deputized himself the church cop.”

I asked him what he meant, and he said, “Well, he wrote me a ‘y’adda ticket’ yesterday. I used to get these all the time when I was pastoring. I usually just tear them up.” When I asked him what a “Y’adda ticket” was, he showed me an email from the guy at church that essentially said, “You guys are doing it wrong, and you ought to (y’adda) do it this way instead,” along with exhortations that his “y’adda ticket” wasn’t just his opinion or a viewpoint. No. It was really what God wanted us to do.

In the same way, the Pharisees had deputized themselves the guardians of Israel’s purity, devotion to God, and devotion to the law of Moses. From their perspective, their criticism of Jesus was evidence of their own faithfulness to their responsibility to keep God’s people pure from defilement and far away from false teachers (cf. Deut. 13:1-5). Many of them were devout men, expert students of the scriptures, and wholly dedicated to the things that they had been taught about God (cf. Phil. 3:3-6). They had no official designation from the nation of Israel to take on this role, but they took it upon themselves and saw their role as a sacred duty (more about why this did not fare well for Jesus here).

That’s how it is with church cops too. They are often not in formal places of leadership within a congregation, but they do have some level of influence, and they are very passionate about their own sense of how things ought to be. When they write someone a ‘y’adda ticket,’ they truly believe that they are helping the person avoid a sin (or helping the people being led astray to get back on track). They are a mixed bag of both pure and defiled motivations and perspectives.

In this scene from Mark’s gospel, the Pharisees accuse Jesus’ disciples of (1) walking, (2) through grain fields, (3) plucking grain, (4) on the Sabbath. According to their tradition, all of these things meant that the disciples were not honoring the commandment to keep the Sabbath holy. Let’s look past the fact that these Pharisees likely had to walk a good distance themselves in order to spy on Jesus’ disciples out in grain fields on the Sabbath. From their perspective, a group of men walking through grain fields, plucking grain, and eating it on the Sabbath could only mean one thing. They were doing work on God’s holy day, and that was a no-no.

It is likely that the disciples would have been conflicted about this confrontation, and may have initially felt some level of guilt about the accusation from the Pharisees. After all, they grew up in an Israel where the Pharisees had shaped the conscience of the nation about what was right and what was wrong. Who knows? They may have even felt guilty while they were walking through the fields with Jesus, and may have wondered if they would get in trouble with their own “church cops.” For a disciple, this is often a point of difficulty. When do the church rules and the religious rules actually conflict with what it means to follow Jesus? Can I go against what I have always been told and still be right? Might I be doing what I have always understood to be right, and actually be wrong?

What does Jesus say about the whole situation?

25 And he said to them, “Have you never read what David did, when he was in need and was hungry, he and those who were with him: 26 how he entered the house of God, in the time of Abiathar the high priest, and ate the bread of the Presence, which it is not lawful for any but the priests to eat, and also gave it to those who were with him?”

What was the accusation of the church cops? In simple terms, it was that the disciples were working on the Sabbath.

What was the simple response of Jesus?

“Guys, they were hungry. They needed to eat.”

This helps us to understand the difference between Jesus’ understanding of the law and that of the Pharisees. From Jesus’ perspective, “The Sabbath was made for people, not people for the Sabbath.” In other words, God did not create humans so that there would finally be someone around keeping God’s arbitrary rules. Rather, he gave humanity a gift (the Sabbath) so that our need to rest, be refreshed, and re-connect to God would keep us plugged in to our creator.

The final words of Jesus are important too…

Jesus takes the messianic title of “Son of Man” to himself (cf. Dan. 7:13-14) and essentially says that he (and his way of interpreting and living out the commands of God) truly embodies God’s intent for humanity. Thus Jesus is identifying himself as the representative of true humanity in relationship with God. He would never lead his disciples to dishonor the Sabbath. But he does lead them into a new way of understanding it. It is a gift. By taking this approach with the Pharisees, Jesus is judging their conclusions to be contrary to the Law’s intent to be a blessing to people. His disciples should have no fear that walking through a field of grain and eating food from God’s creation somehow violates God’s law – though it did violate the Pharisees’ tradition.

Sometimes following Jesus leads to breaking the rules set up by church cops. But Jesus will never lead you to do something that would hurt your relationship with God. He cares about that, and he cares about the basic things in your life as well – that you are a human being who gets hungry and who needs to eat – even on the Sabbath.