A Review of “Understanding Prophecy”

While there are some significant differences between the various eschatological views that are found within the Church, I’m convinced that there are some general hermeneutical guidelines that would serve students of Scripture when approaching apocalyptic literature. Yet because there are a variety of views represented, with differing presuppositions often attached to those respective views, finding a resource that would serve everyone seems difficult to obtain. 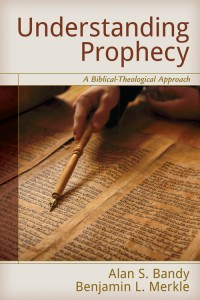 And that’s precisely why I enjoyed Alan S. Bandy and Benjamin L. Merkle’s Understanding Prophecy: A Biblical-Theological Approach. After all, Bandy is a Historic Premillennialist and Merkle is Amillennial… and yet they agree that there are common interpretive concerns (keys to understanding) when dealing with literature in the “prophecy” category. They do a great job of pushing back against the common assumption that “prophecy” is “some sort of cryptic cipher to decode current events” or “all about making future predictions.” The authors suggest that when we study prophecy in its historical context, we come to a better understanding of this literature. You’ll have to read Understanding Prophecy in order to get their full explanation, but I’d like to note that I’m in agreement with their perspective.

What I enjoyed most about Understanding Prophecy is that it takes a biblical-theological approach to the subject. Rather than selectively dealing with various texts throughout the Christian Scriptures, the authors suggest that we should “assume that God’s purpose of redemption is unified.” Thus, a biblical-theological approach becomes helpful because it’s a discipline that is concerned with the “big picture,” so to speak.

The authors also deal well with the differences between the Old Testament’s unconditional and conditional prophecies (not to mention the fulfilled ones!), the Messianic prophecies, and how the New Testament deals with these and either shows how they are fulfilled in Jesus and the Church or what is still to come. Finally, their conclusion on “Why Prophecy Matters” is a winsome and convincing argument to value this biblical genre in a time when most of the popular stuff out there might make readers just avoid it.

The authors also include appendixes on the meaning of “all Israel” in Romans 11 and the Millennium, from their respective positions (Historic Premillennial and Amillennial).

While I found Understanding Prophecy to be a great read, fully of excellent material, I do have a couple of observations that may be interpreted to be critiques. I’m not sure they are really criticisms other than observations or suggestions for readers.

First, Understanding Prophecy is certainly not a scholarly academic tome, yet it’s also not a light read. It’s not the type of book you would likely give to someone new to the Christian faith who has interest in understanding Scripture. It’s certainly well researched and footnoted, so pastors, church leaders, and informed readers will love it.

Second, the authors argue for a unified theme, which I think is one positive that biblical-theology provides. Yet while I agree there is a ton of unity, the authors don’t really address the diversity or uniqueness of Scripture much. I realize that the authors are not writing a book on biblical-theology, but given that their subject is prophecy and that literature contains some diversity between biblical authors, I was expecting more energy spent addressing that. The authors certainly don’t ignore it, but it felt like many Evangelical assumptions were at work, many of which I share. But I was hoping more would have been addressed on that.

At any rate, I really enjoyed Understanding Prophecy!