Follow Me (Part 4): Meanwhile back at Capernaum… Jesus Heals a Paralytic 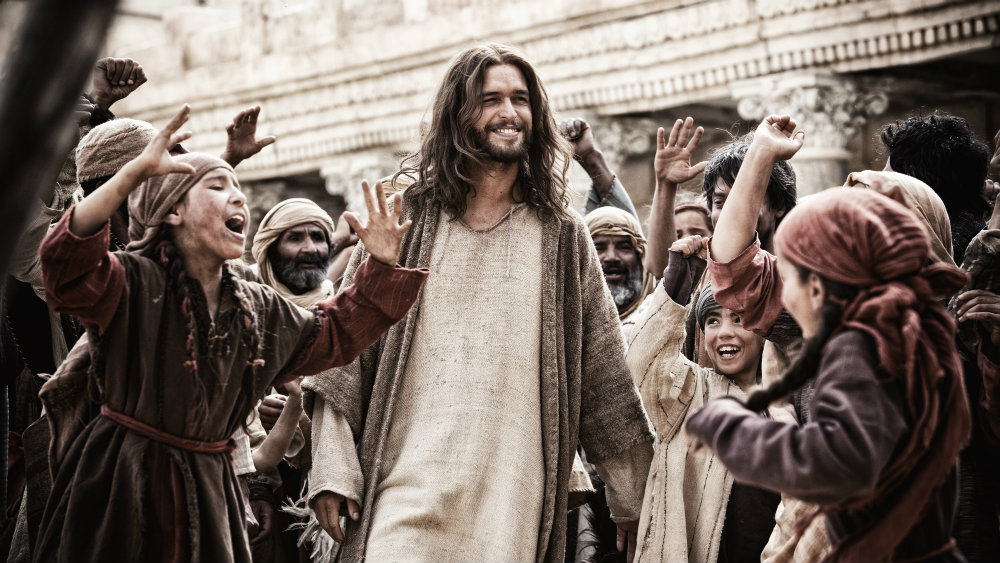 So Jesus returns to Capernaum (Mark 2:1; the base of operations for His ministry), after His circuit preaching/ministry tour through Galilee. Apparently they are back at Peter’s house again, and again, due to Jesus extreme popularity, no one can get through the front door of Peter’s house: “and He was speaking the word to them” (2:2, NRSV). So if no one could get through the door, you can just imagine how difficult it was for the four guys carrying their paralyzed friend! What happens next is one of those ‘you’ve just got to put yourself in the scene’ moments in the Bible:

So you’re one of the disciples. You just got back from a long road trip. You’re hanging out at your friend Peter’s house. But the Master, as usual continues to teach and minister to the needs of the (ever swelling) crowds which follow you all wherever you go. What the heck! There’s someone on the roof. These people are crazy! Then the first ray of sunlight begins to squeeze through a small hole in the roof into the house (along with some 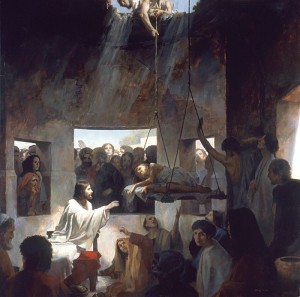 dust from the demolition project that these crazies are doing on your buddy’s house). Oh you thought that was crazy: now they start lowering a crippled guy on his bed through the now gaping hole in the roof. You’re probably hoping that the Rabbi is going to say “OK, you friggin’ nut balls…” but you’ve been following Him for a while now and you know He’s going to have compassion on this guy, and probably try to help Him – another healing?!? The He says the most bizarre thing: “Son, your sins are forgiven” (v. 5, ESV). The scribes are there. You see their eyebrows raise. Oh no, He’s gonna tick off the local religious leaders again. Jesus, don’t you know that this is my hometown!?!

“Who can forgive sins but God alone?” (v.7) they ask. Jesus doesn’t answer their question. He answers their question with a question (not that unusual for Him): Which is easier, to say ‘Your sins are forgiven,’ or to say, ‘Rise, take up your bed and walk’? (v. 9). Oh boy, can he really do it again? He does. And apparently He does it to make a point that “the Son Of Man has authority on earth to forgive sins” (v.10). Wait a minute, who’s this: “Son Of Man?” Is he talking abut Himself? What about the Son of Man spoken of in the prophet Daniel? Meanwhile, while you’re standing there puzzled the paralyzed guy gets up and picks up the bed he was dragged in on and walks out! Everyone is blown away. People are glorifying God, there’s a ton of excitement, commotion – you’re caught up in it. Whoa, the Master’s done it again!

Now you remember why you keep following Him. The hours are long and the working conditions suck. But there’s something about Jesus. It’s only later that you have time to ponder the fact that He has tied forgiveness of this man’s sin to his miraculous healing.

Jesus apparently cares about both the spiritual and physical condition of people. Could it be that the disciples are beginning to understand that these are signs that “The Kingdom of God is near” (1:15, NLT)?

So why do you follow Jesus? Are you even following Him? Or is your “walk with Christ” more characterized by a ‘show up and punch the clock on Sunday’ brand of Christianity? There are no nominal Christians in the Bible. Are you a fan or a follower? Perhaps you’re a Pastor, and you’re saying “Yep, the hours are long and the working conditions suck. My people have no idea the sacrifices I make.” Or maybe you’re wondering how can you even serve Him when you’re out the door to work before the sun is up and home every night, well before 7pm, most nights, anyway. How can I bring the kingdom Of God to my workplace, to people I meet on the street, in my family? What keeps you going? What is it about Jesus that keeps you coming back, keeps you following Him? What keeps you from throwing in the towel on being a following Him?

Next time Jesus invites a traitor to join His small band of followers (until now, composed solely of just the four fisherman) – a tax collector: Levi the son of Alphaeus.