Follow Me: What Does it Mean to Live as A Disciple of Jesus (Intro)

So I’m starting a new series. I know where I want to start, but quite frankly have no idea where this thing is going to end up. I want to explore what does it look like to be a follower of Jesus. I’m basically going to start going through the gospel Mark. We’ll be looking at the “Follow Me” passages and then basically anything that I think bears on the question of what it means to follow Jesus today. After that we may go on to explore John or Luke. I’m not really sure. It’s kind of an open ended series.  So here goes…

After a brief introduction to Jesus through the forerunner, John the Baptizer, and a very short (1 verse) description of the temptation of Jesus (Mark 1:12), Jesus begins proclaiming the good news that the kingdom of God “has come near” (v. 15, NIV), inviting people to “repent and believe.”

I’ve always been struck by the next line in the narrative: “And immediately they left their nets and followed him.” Even more so the reaction of James and John: “and they left their father 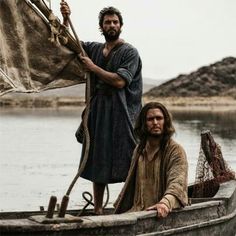 Zebedee in the boat with the hired servants and followed him” (v. 20). Seriously! Peter just drops the net in his hand, right there, picks up and follows this itinerant Rabbi who just came to town! And James and John, they just walk away, in the middle of their shift at the family business – ‘Bye Dad!” Really?

Is this what Jesus requires of me? To quit my job and start going from town to podunk town, doing OJT with this Rabbi? What was it about Jesus that drew these men? Was it the fervent Messianic expectancy running rampant in first century Palestine? I doubt that these four men were particularly religious. These were working class guys, hard working guys. Was it because they’d already been influenced by John the Baptist’s ministry?

Was it because God called them? Why do I follow Jesus today (whether I do it well or not is another question, but clearly there is something about this 1st century Rabbi that has drawn me to Him). Something about him caused me to spent $30,000 of my own money to study His Life and teachings (and the world religious system that is built around Him). Why do you follow Him (comment below)? Why have I gotten up early every Sunday morning for the last 24 years to gather, celebrate, pray with other like-minded followers of this crazed eyed Rabbi, when I could have slept in or watched the football game like any sane-minded, normal person would.

Could it be that God has called me? Has He called you? Called us to do what?  The words of Jesus echo across the millennia:

It’s the most important thing we can do as Jesus’ people. Follow Jesus! Let me say that again: “Follow Jesus!!” Who cares what your political party affiliation is. Are you following Jesus? Any idiot can make a profession of faith, respond to an altar call, pray a sinner’s prayer of repentance, or the sign that page in the back of the Gideon’s Bible. Are you following Jesus?

Well lets do it. Take this journey with me. First stop, Capernaum! Jump on board, let’s follow the disciples as they follow Jesus through this “good news” account, kata markon (as the ancient inscription title of this book reads) – “According to Mark” (a close friend, and ministry associate of Simon Peter). What better way to figure this puzzle out than to see it through their eyes, what it must have been like to follow Jesus from small town to village and on to the next: proclaiming this thing that the Master called “the Kingdom of God,” ministering to people right where they were, seeing Jesus do crazy miracles, and then give these working stiffs ‘authority over evil spirits’ (6:7), to do the same kind of miracles and healing that Jesus did.

I have no idea where this thing is going… join me anyway!