Why is there no “Church” in Tyndale’s Bible? 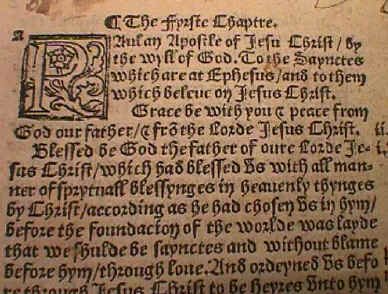 Over the past couple of years our family has been on a much more conscious and intentional ecclesial journey.  That journey has lead us out (at least for now, and perhaps forever) of the typical structures and approaches to everything we ever knew (or thought we knew) about “church,” and into a very adventurous journey of discovery. We have not rushed the journey, and we’ve been pretty open with everyone we know about how we’re processing it all. I will say that for people who are very committed to the ways in which they have always thought about church, the conversations are not always comfortable.

As a few of our dear friends have watched us move along, they have genuinely and lovingly reminded us (wondering if we might have forgotten) that “Jesus loves the Bride” (the church) and that we should too, and that we shouldn’t throw babies out with the bathwater. All of these exhortations (which flow out of the best motivations) sadly assume that we had forgotten all about Jesus’ love for the Church (which we also love), and typically fail to explain which part of what they mean when they say “church” is the baby, and which part is the bath water. And to be honest, to us the exhortations sound a bit like the mom who says to her son as he runs out the door to be with friends, “Just remember son, as you go outside — don’t take off your shoes and then intentionally step on rusty nails.” The sincere warnings assume that such activity is precisely what we had in mind, and that we need to be reminded not to do it despite our obvious or likely inclinations.

All of this aside, this ecclesial journey has forced us to be introspective (about how we really see things), retrospective (about how we have always done things), and has enabled us to deconstruct a lot of our assumptions, expectations, and preconceived notions about what the Bible is trying to tell us regarding how Jesus, the world’s only true King, has gathered and reconstituted the Jew and Gentile people of God around total loving allegiance to his kingly-rule, has welcomed them into his kingdom-family, and has included them in his kingdom-expanding mission.

The underlined part of that last sentence above serves as my own working definition for the word ekklesia (…which, by the way, is the other side of deconstruction. You have to reconstruct at some point, say what you do mean by things, and then get on with living those things out in the every-day world). That word ekklesia is, unfortunately, usually translated as church in the average English Bible.  But there once was an English Bible translator by the name of William Tyndale (have you heard of him?) who refused to use that word, becasuse — well — his ecclesiology simply wouldn’t let him, and for that I’m grateful.

In his article entitled “‘Dones” or “Beyonds?'” – Steve Simms references a book by Don Finto called Prepare! wherein Finto reflects on Tyndale’s resistance to using the word church as a translation of the word ekklesia. Quoting Finto, he writes:

Church’ is an unfortunate mistranslation of the Greek word ekklesia — literally meaning called out. The Greek word carries no connotation of a building, but of people. William Tyndale understood this. In his 1525 completed text of the New Testament, there is no church. There is only community. Even under great pressure to translate ekklesia as church, Tyndale resisted.

I was pretty excited when I read this insight into Tyndale’s translation of the word ekklesia, and I spent a bit of time looking over some of the more familiar “church” texts to see what he did with them. The bottom line is that Tyndale kept it simple and consistent. He chose the word congregation as the best way of understanding what is meant by ekklesia.

For the sake of background, the word ekklesia appears in the Greek New Testament about 111 times and is included in 17 of the 27 New Testament books. Of those, it is used most often in Acts (23 times), 1 Corinthians (21 times), Revelation (19 times), 2 Corinthians (9 times), and Ephesians (9 times). After that it appears between one and five times in the other N.T. documents that use it. It is employed by Matthew (who attributes it to Jesus), by Luke (who only uses it in Acts, but never in his Gospel), by Paul in 11 of his writings, by the writer of Hebrews, by James, and by John in 2 of his five contributions to the New Testament (if it is the same “John” who wrote all of those). Another way of looking at is — the only N.T. authors who don’t use it are Mark, Peter, and Jude.

So — Mr. Tyndale had 111 chances to use the word “Church” when he came to this word in the Greek manuscripts, and he chose to use that word a total of ZERO times, and to use congregation instead.  Here are a few examples (I won’t provide all 111)…

Mat. 16:18 – And I say also unto thee that thou art Peter: and upon this rock I will build my congregation. And the gates of hell shall not prevail against it.

Acts 13:1 – There were at Antioch in the congregation certain prophets and teachers: as Barnabas and Simon called Niger and Lucius of Cerene and Manahen Herode the Tetrarkes norsfelowe and Saul.

Rom. 16:1 – I commend unto you Phoebe our sister (which is a minister of the congregacion of Chenchrea)

Rom. 16:16 – Salute one another with an holy kiss. The congregations of Christ salute you.

1 Tim. 3:15 – But if I tarry long then thou mayest yet have knowledge how thou oughtest to behave thy self in the house of God which is the congregation of the living God the pillar and ground of truth.

And I could go on and on…

The point here is that Tyndale used the word congregation whether he was talking about the ekklesia in universal or local terms. I like that a lot, and it helps me to stay connected with what the ekklesia really is as I continue on my own ecclesial journey. I have not written (here or anywhere else) all that I will ever think or want to say about this subject. There is more to learn, more to think about, and more to experience. There is, apparently, a baby and some bath water that need to be differentiated at some point (one carefully kept as the other is thrown out), and other things too. So, you may consider this little page (or two) of scribbles another step on our ecclesial journey.