The Most Difficult Issue in Hermeneutics! It was one of those late into the night conversations. It was the final night before the conclusion of the Society of Vineyard Scholars Confernce back in April of this year. I stopped by my friend Kenny Burchard‘s room at about 11:30pm. We talked into the wee hours of the night about life, ministry, calling, church, theology, ecclesiology and… Hermeneutics.

That’s right the conversation eventually led me to bring up with Kenny the question of what I believe to be the most difficult issue in hermeneutics: How do we determine what in the Bible 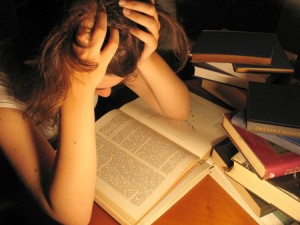 is culturally relevant and what is an eternal principle for all believers in all times? How do we know when the Bible is simply reporting something that happened (without God necessarily endorsing what is happening as morally or spiritually right), and when is the Bible teaching us (through the upright actions of its characters) how to live right before God and at peace with our fellow humankind on earth? Yep, its that age old question of ‘can you draw a doctrinal principle from a historical narrative passage or book’ (like, for example, the book of Acts)? Or to use the technical terms: is the Bible being prescriptive or descriptive here?

I recalled to Kenny how, when I was taking Exegetical Method & Practice back in Seminary, that the Instructor had given a handout which talked about this very thing for various passages in the New Testament (Is it Permanent or Temporary)? [You can download a copy of the handout here: Permanent vs Temporary_Handout]. Wow, I thought, what a handy reference! I’m gonna keep this one so whenever I have a question about a passage (is this culturally relevant or an eternal principle?) – I’ll just whip out the handout and there’s my answer to this complex exegetical question! But, I thought, how does one go about determining the answer to this question when you don’t have Peter Hintzoglou‘s handy dandy reference sheet?

This is an incredibly important question for a couple of reasons:

By way of another example, there is a tendency in many conservative Biblicist circles to always treat certain characters in the Old Testament as paragons of virtue, examples of moral behavior through the ages. Abraham, the Father of the Hebrew faith, is certainly a man to be looked up to, but twice (Gen. 12:11-20, 20:1-18) he denies that Sarah is his wife, and concocts a story to say that she is his sister in order to save his own skin (thus putting her in danger of becoming a concubine of the Kings of the land in which he was sojourning). What do you think ladies? Was Abraham providing a good moral example for men today? And Yeah he was a man of faith, but he and his wife Sarah (and the rest of their dysfunctional family) tried to make the promise of God happen through a rather twisted plan to use Sarah’s maid as a child bearing surrogate (little bit of tension around the dinner table in that family, I guess) – is that a good example of faith? To say nothing of the greatest King of Israel (and part-time adulterer/murderer) – David. Yeah, a great man of God, but…

All this is just to say that because something happened in the Bible does not mean that we should of necessity imitate it! So what do you think? Is this the most difficult (or most critically important) issue in Hermeneutics? What principles can we use to discern when the Bible is being prescriptive and when is it being descriptive? Can we draw absolutely no doctrinal conclusions ever from the book of Acts (or from the Psalms for that matter)? How do we know, in Paul’s letters when what he is saying is something all followers of Jesus must follow, and when he is simply addressing a local situation in a particular church under his purview, or when his “command” is only relevant to that culture? Could an Egalitarian argument in favor of Women in Leadership, lead to a relativistic “slippery slope” where homosexual leaders in the church is the next step? Let me know what you think in the comments below!