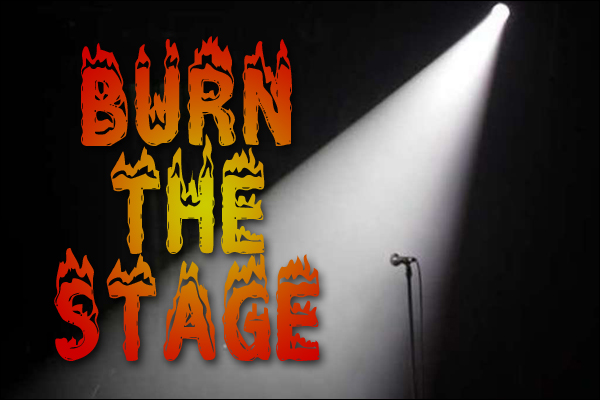 The Younger quickly sketched the image on a napkin with bold, confident strokes, eagerly outlining the thought he had just blurted out to the Elder.

The Elder watched him over the rims of his reading glasses, a steaming cup of coffee — “black, the way God drinks it”, as he liked to say — cupped between his hands.

“There!” announced the Younger, finishing his impromptu sketch with a flourish; blue ink lines standing out clearly against the muted tones of recycled paper. He rotated the picture so that the Elder could more easily see it, as he continued with the thought that had inspired his brief artistic foray.

“Burn the stage”, he repeated, jotting three ink-blue points on the napkin to emphasize each word. “I can’t help but wonder whether spiritual gifts could be exercised in a much healthier, low-key, non-hype way — if we just burnt the stage.”

The Elder studied the crude drawing as he replied, “Well, I think it’s equal to your earlier suggestion of ‘cutting the microphone cord’, although the image of something burning is much more evocative than a severed mic cord.”

The Younger took another generous swig of his americano (which had fortunately cooled a little by this point in the evening). “Yeah, I just want to get the point across. What do you think? Would the exercise of spiritual gifts be healthier, if we didn’t make such a public display of certain gifts, and put people on a pedestal — excuse me, I meant to say, platform.”

The Elder chuckled as he raised his mug to his lips, “That was no Freudian slip, my friend,” he teased, “that was quite deliberate.”

The Younger grinned in response. “Guilty as charged. But what do you think of my idea?”

“Well,” began the Elder, placing his coffee mug back on the table, hands once again wrapped around it, “I think the backdrop for what you’re suggesting — which I think is a very good insight — comes again from 1 Corinthians 12: ‘Now to each one the manifestation of the Spirit is given for the common good.’ As long as people keep in mind why we are given spiritual gifts, the gifts get less abused.”

As the Barista began industriously polishing the counter around the espresso machines, the Elder continued, “Spiritual gifts are given to serve others. They are not to become our identity. They are simply tools the Spirit gives us, to serve. Until we use spiritual gifts with the same attitude that Jesus had when He washed the disciples’ feet, we will miss something very important.”

The Elder stopped abruptly, realizing that he’d begun preaching. “Sorry, sometimes I can’t help myself,” he said with a self-deprecating laugh. “I have very strong feelings about this topic.”

“Strong enough to ‘burn the stage’?” the Younger teased in return.

The Barista continued her energetic polishing of the counter, but the Elder couldn’t help but wonder if her look of concentration was hiding her reaction, as she had clearly overheard the Younger’s last comment.

“Let’s just say,” the Younger amended, suddenly aware that his voice had carried further than he had intended, “that if we could remove anything that would appeal to the ego, when spiritual gifts are exercised, we might see over half of the people who currently want to be on the platform, have to find their identity elsewhere.”

“Ouch,” protested the Elder, grimacing as though in pain, “that’s a little harsh, but sadly, probably true. Allow me to word it just a little more positively:

“Humility and the gifts of the Holy Spirit must become inseparable.”

“Take away the stage, or the microphone, or whatever metaphor you wish to use. Gifts are for serving others. Period.”

“Hear, hear”, the Younger raised his mug in tribute, and finished off the remainder of his americano. The Barista, for her part, busied herself with her own routines behind the espresso counter.