We are currently going over steps to form a better understanding of the Bible, the central text of the Christian faith. Last week I wanted us to recognize our role as reader and this week we’ll focus on what we are reading. Our second step is finding a good translation.
Lets start with a little exercise I learned from Henry Virkler a professor at Palm Beach Atlantic University.

Take a moment to read Proverbs 22:28 from a very popular Bible translation the 1984 edition of the New International Version. 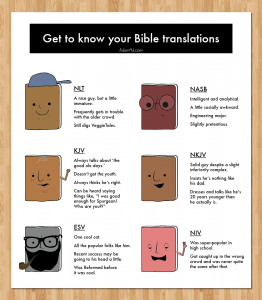 “Do not move an ancient boundary stone set up by your forefathers.”

Without using Google or any other Bible translation what does this passage (above) mean? Does it mean… 1. Tradition should be protected so don’t make changes. 2. Don’t take what’s not yours. 3. Don’t move the things that guide and direct travelers from town to town. Or perhaps it means none of these things. Maybe it means one, two and three? Take a moment to discuss this with someone.

Ok, so what did you pick? If you picked “Don’t take what’s not yours” you would be correct. How would you have known that this passage is about stealing by moving property lines from this translation? Well this is where multiple translations can be of help. This example brings to our attention the incredibly complex task of translating a text that is thousands of years old. Should the translation your reading help translate some of the cultural meanings as well as the words? Gordon Fee is the Professor Emeritus of New Testament at Regent College. He breaks the different approaches to translation theory down to three categories Formal equivalence, Functional equivalence and Free Translation.
“Formal equivalence: the attempt to keep as close to the “form” of the Hebrew or Greek, both words and grammar, as can be conveniently put into understandable English. The closer one stays to the Hebrew or Greek idiom (figures of speech), the closer one moves toward a theory of translation often described as “literal.” Translations based on formal equivalence will keep historical distance intact at all points.” Here is what our Proverbs 22:28 passage looks like from famous Formal Equivalence translation the King James Version“ Remove not the ancient landmark, Which thy fathers have set.” Some examples of my favorite Formal Equivalence translations would be The New American Standard Bible, The New King James Bible and the English Standard Version.
“Functional equivalence: the attempt to keep the meaning of the Hebrew or Greek but to put their words and idioms (figures of speech) into what would be the normal way of saying the same thing in English. The more one is willing to forego formal equivalence for functional equivalence, the closer one moves toward a theory of translation frequently described as “dynamic equivalent.” Such translations keep historical distance on all historical and factual matters but “update” matters of language, grammar, and style.” Here is what our Proverbs 22:28 passage looks like from the popular Dynamic Equivalence translation the New Living Translation “Don’t cheat your neighbor by moving the ancient boundary markers set up by previous generations.” Notice how the passage indicates that moving the boundary marker is cheating your neighbor? Even though the words “cheating your neighbor” are not in the original language the translators feel that it is a necessary addition in order for the passage to be understood by you and I today. Some examples of my favorite Dynamic Equivalence translations would be the New Living Translation, the 2011 new edition of the New International Version, and the Holman Christian Standard Bible.
“Free translation: the attempt to translate the ideas from one language to another, with less concern about using the exact words of the original. A free translation, sometimes also called a paraphrase, tries to eliminate as much of the historical distance as possible and still be faithful to the original text.” Here is what our Proverbs 22:28 passage looks like from the popular Free Translation the The Message “Don’t stealthily move back the boundary lines staked out long ago by your ancestors.”
Again notice how the passage shows that moving the boundary marker is cheating your neighbor and even brings in the word “stealthily” to indicate theft? My favorite Free Translation of the Bible is The Message.

If English is your native language you are very fortunate when it comes to Bible reading. We are blessed with many solid English translations of the Hebrew, Aramaic and Greek that our Bibles were originally written in. So if you are going to sit down on a lazy Sunday afternoon and read the Bible like a good book I would suggest a functional equivalence or even a free translation. If your purpose is to sit down for intense in depth study for sermon prep or teaching I would start first with a solid formal equivalence. As a pastor I prefer to prepare my sermons from a formal equivalence while observing how it interacts with the original languages. However, I do prefer to preach from the New Living Translation (Dynamic Equivalence) if I can because I think it is a better translation for public reading.
In the little exercise we began with there is no doubt that many folks selected (a) or (c). I agree with Professor Henry Virkler when he says “its likely you came to the text subconsciously asking, What does this text mean to me? The important question however is what did this text mean to the original writer and his audience?”. Because of that very natural tendency to see ourselves as the topic of the Biblical text we can forget that there is an original audience, culture and writer behind whatever text we are reading in our Bibles. Don’t get discouraged though we do this when we watch a sports game on T.V. for example. We can easily forget that there is a production crew and cameraman’s prerogative behind every game we watch on TV. It is a much different experience watching a Hockey game in person and taking everything in without the production teams spin and the commentator’s remarks. When a person watches a hockey game on TV its all about you the viewer. When you go to a game in person it is much more about the team and game. I had no clue how often players were subbed out in a hockey game until I watched my first live game. Why? Because the camera men and production team want to keep the camera where the action is. A translation that can help you to understand the “there and then” or the “live” sense of the Biblical text by translating it to the culture of the “here and now” is a tremendous tool for reading your Bible well and living out correctly what it says is imperative for us today. Dynamic equivalence and Free Translations are designed to help the reader by not only translating the words but also the culture and customs that make up the broth that any language stews in. A mechanic has tools and so does a Bible reader. Don’t be afraid to find a solid translation or perhaps several that will help you not just read your Bible but read it well and with understanding.