PORNEIA in the book of Revelation 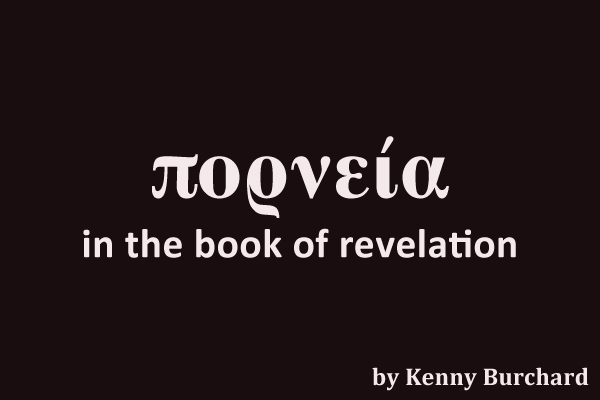 And now for a really geeky (but hopefully helpful) post about the usage and meaning of the word porneia in the book of Revelation.

The word-group related to πορνεία (porneia) occurs 55 times in the entire New Testament. Interestingly, there are 19 occurrences of the word in several of its various forms in the Book of Revelation alone. One in three references to porneia in the entire N.T. are found in this one book. According to Colin Brown, this is significant because:

This is to say that one of the things that God will be removing from his creation when it is reconstituted is the brokenness that is pervasive within the whole scope human sexuality.

Kyle Harper, whose work on the word porneia surveys its usage across 1,200 years of religious and secular history (from 600 B.C. to 600 A.D.) notes that…

In Hellenistic Judaism we witness a widening of the term’s meaning to indicate sexual acts of male commission and to include virtually any form of prohibited sexual relationship. [2]

By the time the book of Revelation was written, both John and his early Christian audience would certainly have understood these connotations and allusions associated with the meaning of porneia. This would have been especially true for the Jewish constituency of the early Church, of which John himself was likely a part. Again, according to Harper,

the Hebrew Scriptures created an enduring association between sexual sin and “idolatry. [3]

The relationship between porneia and idolatry is unmistakable in Revelation.

The word πόρνη (pornay), also found five times in Revelation (Rev. 17:1,5,15,16; 19:2), is the feminine-singular-noun form of porneia, and generally describes a woman who, either for money or for lust, yields herself to sexual immorality. In the ESV, the word is translated as “prostitute” in every case.

What is the significance of the prominent use of this family of words in the Book of Revelation? It is a term that covers a broad range of pagan practices, which had begun to be accepted and normalized — even in some corners of the Church of Jesus — at the time the Book of Revelation was written. This normalization was chiefly accomplished when, through false teaching and accommodation, followers of Jesus were, according to Gordon Fee,

…being misled to believe [that] one can follow Christ and at the same time engage in some of the pagan practices as well. [4]

If Fee is right, then whatever porneia is, advocating it through teaching, and accommodating it, are wholly incompatible with a claim to follow Jesus. Additionally, if present-day questions about the biblical ideal of marriage and human sexuality (and distorted images of those biblical ideals) can be discussed under the heading of porneia (among other things that are also sexually immoral), then this presents a unique set of challenges to followers of Jesus. Are there Christians advocating for or attempting to coerce the Church of Jesus into accommodating and normalizing porneia — and thus, to worship false gods?

Sexual immorality, in its various expressions graphically illustrates the current distance between what God intends for the human race and our current condition. In this way, sexual immorality is one of the clearest indicators that creation is out of sync with its creator, and functioning in submission to another god.

In his commentary on Revelation, Michael Gorman demonstrates the thematic link between various points of human brokenness (including a propensity toward various expressions of sexual immorality) and the worship of false gods when he writes:

The pantheon of the first century included, among many others, Aphrodite, Asclepius, Dionysius, Mars, and Caesar. Today we have different names for their counterparts: Sex, Health/Fitness, Pleasure, War, and Power/Security, among others. [5]

The Church in Revelation is called to live in visible and prophetic contrast to these false “gods” and their systemic corruption on every level. She is called to contend for, and participate proactively in God’s restoration of the world in a variety of significant ways. This is accomplished, in part, by refusing to either advocate for, or accommodate the practice porneia — especially among those who have come to confess that Jesus is Lord.