The Acts of… The Word of God 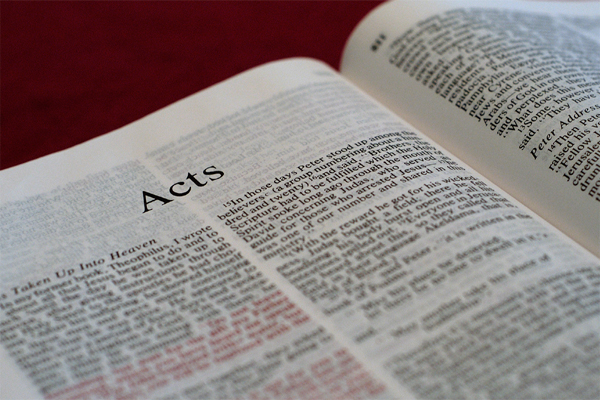 When I first became a Christian, my King James Bible had as the title for the book of Acts, “The Acts of the Apostles.” Soon after this, I found myself in the Charismatic and Pentecostal traditions and learned that it should hr-hr-rEEeeally be called “The Acts of the Holy Spirit.”

In some early Greek manuscripts and in the writings of several early Church fathers, the title for the entire composition is the single Greek word praxeis (πράξεις). [1]  This is the near equivalent of the English word praxis.

Thanks to an insight from Biblical commentator David Peterson, I believe that there is another “character” in the cast on Luke’s literary stage. There is another doer that is doing and getting things done. And that doer is the Word of God.

…‘the word’ is also personified in certain texts and appears as a chief character in the narrative of Acts as a whole. But how is the word to be evaluated in relation to the ministry of the Holy Spirit and the sovereign direction of the ascended Lord Jesus? Word and Spirit are presented as the primary agents of the reigning Lord in forming and growing his church. Human characters have an important role to play in the story, as those who have encountered the heavenly Christ and who act as Spirit-empowered proclaimers of his word. Acts implies that the Lord Jesus will continue to fulfill his purpose in the world, even in the absence of apostles and prophetic figures such as Stephen, Philip and Paul (cf.  Acts 20:28–32). The same word on the lips of Spirit-directed believers is able to reach new people groups and break through cultural and religious barriers to grow the church in ever-widening circles (e.g., Acts 8:4; 11:19–21). [2]

Several texts in particular emphasize the activity of the word in the narrative. They are…

Acts 6:7 – “And the word of God continued to increase, and the number of the disciples multiplied greatly in Jerusalem, and a great many of the priests became obedient to the faith.”

Acts 13:49 – “And the word of the Lord was spreading throughout the whole region.

Acts 19:20 – “So the word of the Lord continued to increase and prevail mightily.”

The emphasis in all four texts is that the word of God increased, multiplied, spread, and prevailed. Peterson is so convinced of the importance and central role of the word of God in Acts that his entire literary outline for the book features the progress of The Word as the indefatigable hero and driving force of the entire story. His outline is…

Indeed, one of the first references to the imperative and intentional activity of God’s word in Acts is in Chapter 1, vv. 15-16:

15 In those days Peter stood up among the brothers (the company of persons was in all about 120) and said, 16 “Brothers, the Scripture had to be fulfilled, which the Holy Spirit spoke beforehand by the mouth of David concerning Judas, who became a guide to those who arrested Jesus. (emphasis added)

One gets the idea that the word of God (here given as a direct reference to two scriptural texts from the book of Psalms) is itself is on a mission in the book of Acts. In this regard, Luke is not alone in his personification of the word of God as an actor on the stage of God’s story. For instance…

Is. 55:11 – “…so shall my word be that goes out from my mouth; it shall not return to me empty, but it shall accomplish that which I purpose, and shall succeed in the thing for which I sent it.”

Heb. 4:12 – “For the word of God is living and active, sharper than any two-edged sword, piercing to the division of soul and of spirit, of joints and of marrow, and discerning the thoughts and intentions of the heart.”

1 Pet. 1:23 – “since you have been born again, not of perishable seed but of imperishable, through the living and abiding word of God;”

Unlike the obvious reference in Acts 1:15-16, the word of God in Acts is seldom a reference to the actual text of Scripture, and is likely not what the above texts refer to either.

Most often in Acts the word of God is a reference to the overarching message that “Jesus is Lord” — and the implications of that message — being preached and proclaimed by (and to) lots of different people in the narrative. [4]

Indeed, it is the proclamation of the living and active word of God by Spirit-emboldened disciples, and the response by those who heard and received the word — the message — that “Jesus is Lord” that sets the trajectory for everything that happens in the book of Acts. In my own life the embrace of the word of God — the good news — that Jesus Christ is Lord, has truly changed, and is still changing everything.

In so many ways, the book of Acts can rightly be called The Acts of the Word of God.