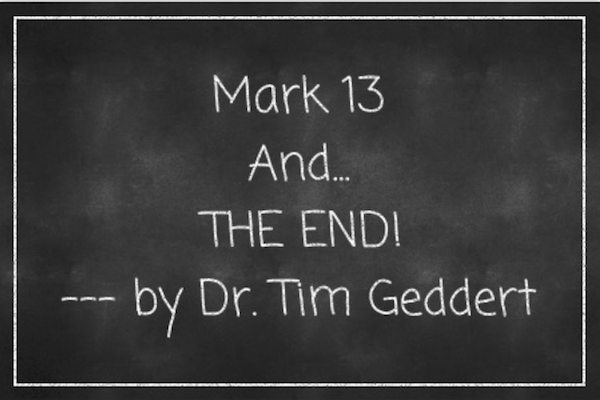 In my first post in this three-part series I shared my way of reading Mark 13, explaining why I have long believed that it is a call to discernment, perseverance, faithfulness and witness, and is not an invitation to look for signs of the end-times and to calculate timetables based on all the signs.

According to Mark 13:32, both the author (Mark) and the speaker (Jesus) did not know when “the End” would come. It follows (I argued) that they also did not know whether the predicted destruction of the Temple would lead directly to “the End”, i.e. to “the return of the Son of Man”, or not.

We live after the Temple fell and we now know that it did not. So the call to enduring faithfulness and witness in the unknown waiting time until “the End” applies to us just as it applied back then to the first readers.

Some places my interpretive perspective has changed…

Previously it seemed obvious to me that the reference to the “Coming of the Son of Man” (Mk. 13:24-27) and the later reference in Jesus’ parable (Mk. 13:33-37) to the “Coming of the Householder” (some translations change that to the “return” of the householder) referred unambiguously to what is usually called “The Return of Christ” and that this event, when it occurred, would signal the end of life on this planet. How could world history continue if the sun and moon are darkened, if stars fall from the sky, etc.? Moreover, the sending of the angels to gather the elect must surely be Mark’s way of referring to what Bible interpreters often call “The Rapture.”

Now I see this differently. The two Bible interpreters most influential in my changing perspectives have been G.B. Caird and his most well-known student, N.T. Wright.

In his book “The Language and Imagery of the Bible” Caird introduces the very helpful image of “prophetic bifocal vision.” He writes:

The prophets looked to the future with bifocal vision. With their near sight they foresaw imminent historical events which would be brought about by familiar human causes; for example, disaster was near for Babylon because Yahweh was stirring up the Medes against them (Isa. 13:17). With their long sight they saw the day of the Lord; and it was in the nature of the prophetic experience that they were able to adjust their focus so as to impose the one image on the other and produce a synthetic picture. (1980: 258)

I think there is abundant evidence that many Old Testament prophecies do exactly that. Prophets superimposed the “near” and the “far” images onto one another.

If that applies to Old Testament prophecy, how much more certainly it applies to Mark 13, where both the speaker and the author claim ignorance about the timing of “That Day” (cf. Mk. 13:32). Neither knew whether the Fall of the Temple, when that would occur, would lead directly to “The End” or whether it would be another event within human history that merely foreshadowed “The End”.

According to Caird, when Mark (and before him, Jesus) used the language of Mark 13:24-27 – references to the coming of the Son of Man, the darkening of sun and moon, the falling of stars, the shaking of heavenly bodies – they were not necessarily referring to “the end of the world.” They might actually be referring to the “earth-shaking” events that would surround the destruction of the Jerusalem Temple. The language can be used to refer to a new epoch in world history. Thus, Jesus and Mark might well have been talking about a new religious and political situation about to dawn, without predicting literal astronomical disasters and “the end of the world.”

I have long believed that much of Mark 13:5-23 was designed to present the reader with multiple polyvalent expressions and predictions, and that these are there by design, to preserve ambiguity about whether the destruction of the Temple would or would not lead to “the End.” Now I am convinced that Mark 13:24-27 do exactly the same thing! Let me say why, but summarizing the argument once more:

In my view the ignorance Jesus and Mark confess in Mark 13:32, we must conclude that at the time they spoke and wrote, they did not know whether the fall of the Temple will also constitute “the End.” Thus I have always argued that all the events referred to in Mark 13:5-23, as well as those in Mark 13:28-31 refer to events associated with the Fall of the Temple and/or “the End.”

If my perspective is correct –

(1) Jesus’ reference to wars, earthquakes, famines, persecutions and family division will characterize the time before the Temple falls, and will also continue afterwards, should history continue.

(2) His description of the “desolating sacrilege” will refer to something that pollutes the Jerusalem Temple, and also to a final abomination, should history continue.

(3) His warning about a tribulation greater than all others will be the one associated with the Temple’s destruction, unless history goes on and an even greater one comes later. The Temple’s fall will happen within the first generation (see Mark 13:30); Mark’s first readers could not know whether “the End” would as well.

The evidence Caird provides, that Mark 13:24-27 need not refer to the literal End, seems persuasive to me. But that should not be taken to imply that it does not, as Caird supposes. Rather it should lead us to conclude that it might or might not.

I now believe that the “end-of-the-world language” of Mark 13:24-27 participates in Mark 13’s pervasive polyvalence. Jesus and Mark formulated these verses in such a way that they might refer only to the earth-shaking events surrounding the Temple’s destruction, but (for all they know) might also refer to “the End.”

Jesus and Mark knew that the coming destruction of the Temple would be an act of God bringing judgment and salvation. They did not know whether it would be the final one. To claim they knew it would not be the final one is to unravel the tapestry Mark has carefully crafted, pulling apart two themes that he has artistically woven together.

So far in this series I have avoided saying what I think Jesus and Mark mean by “the End.” I used to think they meant the end of life on this planet, following Mark’s way of referring to “the Rapture.” Here also I have changed my mind.

What I now believe Mark meant by “The End”

Is this the literal end of planet earth or at least of human history on it? Or is it the end of the world as we know it, since all will be transformed and renewed when “the End” comes? The eschatology that still strongly influenced me at the time of my earlier studies of Mark 13 included some form of a “rapture” designed to remove followers of Jesus from planet earth into another realm of reality. It was therefore natural for me to read, “he will send his angels and gather his elect,” as Mark’s way of referring to this event. I assumed world history would be brought to an end by this event, signaled by the heavenly convulsions and the final advent of the Son of Man.

Then I began to read and to take seriously the writings of N.T. Wright, especially his book “Surprised by Hope”. Wright is not the first to challenge the “rapture theology” that is so pervasive in Evangelical theology, especially in North America. But he is the most persuasive defender of a radically different perspective. In a nutshell, that perspective denies that Scripture teaches there will be a “rapture.”

1 Thessalonians 4:17 is not about the church being snatched up to heaven; it is a metaphorical description of a welcome party going out to meet the coming King and accompanying him in grand procession at his arrival. That’s what Roman colonies did when their emperor arrived. Only the emperor arrived on a road, so citizens went out onto that road to meet him. The returning Christ will “descend from above”, so citizens of his kingdom will “meet him in the air” and then not be whisked away, but rather accompanying him in his arrival to take up his throne on earth. Matthew 24:40 and Luke 17:34 are not about some being “snatched away for salvation.” They are about some being “taken away in judgment.

This perspective insists that God’s plan is to unite heaven and earth, not to remove us from earth and deposit us in heaven. It insists that God’s intention for creation is not to end it or replace it, but to restore it. When final salvation arrives, the returning Jesus will resurrect to new life on this planet (albeit radically restored) those who have previously died and will transform those then alive, so that their bodies are suited to life on this planet in its fully redeemed form. “The End,” according to this view, is the end of “this present evil Age” but neither of history nor of planet earth.

Wright’s eschatological perspective is radically different than many of us grew up with and many still hold. I have come to accept Wright’s view as more plausible than the one I had previously held. Yet, ironically, this change of viewpoint has made me more convinced than ever that my general approach to Mark 13 is along the right lines. Precisely because “the End” does not refer to the end of this planet or the physical creation, but to the fulfillment of all God’s purposes for them, the polyvalent language of Mark 13 now seems even more appropriate to me.

Jesus and Mark did not know when “the End” would come, nor did Jesus reveal many details about what would happen when it would. He knew that the coming destruction of the Temple would be God’s hand of judgment on a political and religious system that had rejected the way of salvation Jesus offered. He knew it would introduce a “new epoch in world history.” For all he knew, that new epoch might be yet another period within world history during which God’s people were called to discernment, discipleship, faithful endurance and witness, as they awaited “the End.” But for all he knew the destruction of the Temple might usher in the final epoch of God’s eternal plan, with the Son of Man coming for judgment and salvation, for the renewal of all creation, for the reuniting of heaven and earth.

What Jesus and Mark denied knowing, that is, whether or not the Temple’s destruction would lead directly to the renewal of all creation, we now know. It did not. But it pointed towards that renewal, so that what Mark 13 said to the first generation, it still says to us, “Watch!” (13:37) . . . and that does not mean “watch for signs”, but rather “be discerning and faithful as you courageously bear witness for Jesus until he arrives.

For God, who is the highest righteousness, cannot love the unrighteousness that He sees in us all. All of us, therefore, have in ourselves something deserving of God’s hatred… But because the Lord wills not to lose what is His in us, out of His own kindness He still finds something to love.