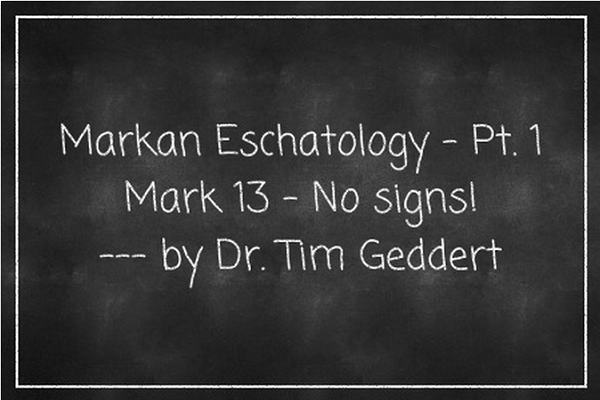 The chapter begins with Jesus’ disciples marveling at the grandeur of the temple and Jesus predicting that it will be destroyed (Mk. 13:1,2). When the disciples ask about the timing of this event, and about the sign leading up to it, Jesus responds with a long speech about events to come and how his followers are to respond to them. But it is not at all obvious that he gives the disciples what they want from him – The Sign (let alone many signs)!

Truth is, this chapter has been interpreted in many different ways, especially as regards “the Sign” or “the signs”. I will summarize six views before sharing my own.

VIEW 2: All these signs point, not toward the temple’s destruction, but to the return of the Son of man.

All three of these views read the chapter as though it contains references to many signs. All seem to overlook the fact that that disciples did not ask about “signs” (plural) but about “the sign” and also the fact that none of the events cited is ever called a sign by Jesus or by Mark! Noticing these things, another set of interpreters concludes that Mark 13 contains only one sign. Again there are three variations:

VIEW 4: The one sign the disciples wanted [Mk. 13:4] is the “abomination that causes desolation”, interpreted as something that desecrates the temple (see Mk. 13:14) and it helps predict when the temple is about to be destroyed.

VIEW 5: The one sign the disciples wanted [Mk. 13:4] is the “abomination that causes desolation,” interpreted as some sort of “Antichrist” whose arrival helps predict when the Son of man is about to return [Mk. 13:26].

VIEW 6: The one sign that “all these things” (i.e. events connected with the End of the Age) are about to occur is that the temple is destroyed.

All three of these seem to me more plausible than the first set of options. But none of them, I think, captures Mark’s main concern in this chapter (and of course behind Mark, Jesus’).

VIEW 7 (my view): There are no signs of the End Times (at least not in Mark 13). I conclude this for a variety of reasons.

Second, in Mark Jesus’ most common response to questions from his disciples is not to answer them and provide what they want, but to challenge the assumptions behind their questions and then provide something else.

Fourth, the whole chapter should be read as a call to turn away from sign-seeking and toward a completely different set of priorities (discernment, faithfulness, witness, etc.)

Fifth, in the only other reference to signs in Mark, Jesus says that “this generation” will not be given any [Mk. 8:11f].

Sixth, the chapter predicts the kinds of events that will happen throughout all of history (and the fact that interpreters through history have thought the “End Times Signs” were happening in their day is proof of that!)

I could go on, but instead, let me suggest how I read this chapter (much of this following an article I wrote for a publication in Germany).

All these taken together seem to imply all of the following:

And these persuasions lead me to conclude the following:

These are the viewpoints I have been arguing ever since writing a dissertation on this topic.

In my next blog post, I will indicate where I have recently changed my mind about what Mark 13 says.

Check out Tim’s commentary on Mark’s Gospel, Markan Eschatology, and Biblical Ethics here at Amazon, and here at LOGOS.