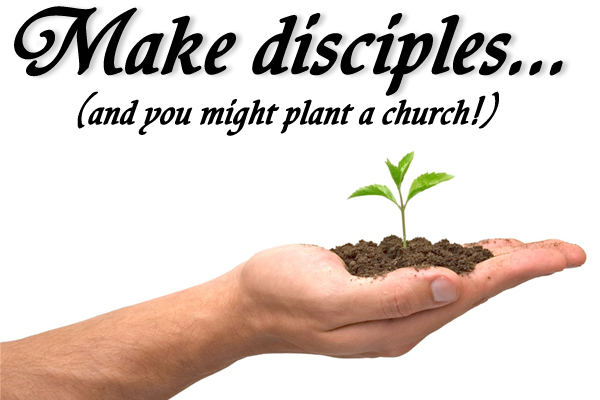 While I love the complex issues related to deep theological frameworks, I also really appreciate that Jesus boiled down the alleged 613 Laws of the Old Testament to two things: love God, love people (Matt. 22:36-40). And while I can appreciate the numerous purposes, goals, and values that churches and ministries list as being important to them, I love that Jesus gave his followers a focused mission: make disciples (Matt. 28:18-20).

The Vineyard Movement, due to the strong influence of an evangelistic John Wimber, was born as a disciple-making movement. From early on, the priority was to reach people with the good news about Jesus and his kingdom! As Bill Jackson has written:

“John went with [Gunner Payne, his spiritual mentor] so many times that personal evangelism was built into his spiritual genetic code. He said he could not go into the market or hardware store without evangelizing someone. During the period between 1964-1970, John estimated that he and Carol led hundreds to Christ.” The Quest for the Radical Middle

This evangelistic commitment followed Wimber from Calvary Chapel into the Vineyard and was one of the reasons why the Vineyard grew so quickly in its first decade of being. In the future I plan to address the nature of Wimber’s Power Evangelism and why the Vineyard believes that Jesus and St. Paul’s model of proclaiming and demonstrating the gospel of the kingdom, known as “signs and wonders,” is important. For now I want to simply suggest that the Vineyard became a church planting movement because it was a disciple making movement.

A number of weeks ago I was at the Missional Leaders Meeting in Colorado Springs. This is a gathering of Vineyard leaders who are involved in missions and/or church planting. In addition to some other excellent speakers, MLM was honored to have Dr. Bob Logan, the Bob Logan, with us. In his message, “Making & Multiplying Disciples That Seize the Mission of Jesus,” Bob shared his observation that, in my words, the Vineyard lost a lot of it’s momentum when it moved away from being a disciple making movement (audio here). Those of us who have been around the Vineyard for awhile may have some ideas of what could be considered distractions from the missional task, but that’s outside the purposes of this post. I simply want to suggest that we would be wise to take Dr. Logan’s advice considering he was there in the early days, loves the Vineyard, and is deeply committed to the task of making disciples.

Over the past few years I’ve ran into people at the Society of Vineyard Scholars’ annual meeting, regional conferences, national conferences, MLM, and other Vineyard gatherings and met people who tell me stories about how they were lost, broken, or just plain “unsaved” and someone from a Vineyard church reached them with the great news about Jesus! It’s inspiring to hear stories about how some unknown Vineyard pastor would go to a park in Southern California and share the story of Jesus with homeless people while giving them food or how some lady who attended a Vineyard church gathered her friends and neighbors together to have a Bible study where they were able to hear about Jesus. Many of these homeless people, friends, and neighbors are now regional and national leaders in the Vineyard! Or pastoring. Or on the mission field.

Jesus told us to make disciples… the Vineyard is a disciple making movement. We joyfully join God’s mission as Spirit-empowered communities who desire to meet people’s needs as we introduce them to the king and his kingdom!

By the way, for anyone looking for some really great disciple making resources, I strongly recommend that you pick up copies of the Dimensions of Discipleship study guides.

I’d like to very quickly agree with some of what my esteemed friend, Kenny Burchard, has said about church planting. Jesus didn’t tell us to go create  corporations that are essentially businesses. We were told to make disciples.

With that being said, as soon as you have two disciples it is possible that you also have a church My robustly developing sense of ecclesiology is that this could be “yes” or “no,” depending largely upon what happens with those two. But in some sense, Jesus seems to give an ecclesiological stamp of approval (my new term!) “where two or three are gathered” in his name (Matt. 18:20).

So behind and foundational to the Vineyard being a church planting movement is the reality that the Vineyard Movement is a disciple making movement. When we make disciples they gather together in what the New Testament calls “churches” (actually, ekklesia, but I’ve already written tongue-in-cheek on that before).