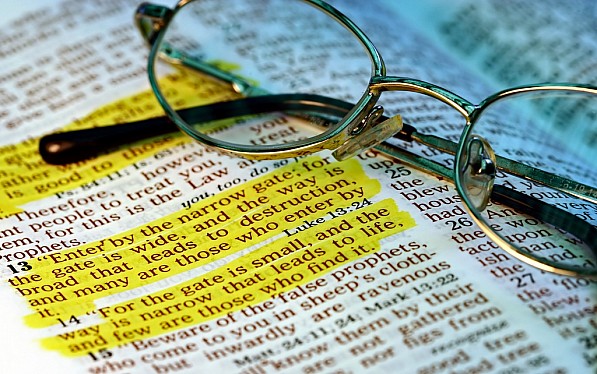 #5.  Proof-texting is a bad habit that we need to break ourselves of. Simply citing chapter and verse does not end any theological/biblical argument! 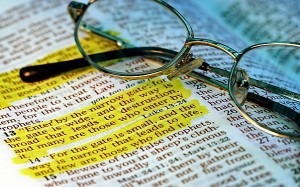 supports the point that we are trying to make, then no “Bible believing” Christian can disagree with us, because the word of God is on our side. Did you catch the subtlety there? In proof-texting, we are using the Bible to support and promote our agenda, rather than proclaiming in a way than allows the word of God to speak to the people of God. The big problem here is the temptation to quote verses out of context. I think most all of us have probably done this at some point. I know I have! And, as is illustrated in the picture above (two-column text, without normal paragraph formatting) treating each verse as an independent literary unit only serves to enable & encourage this type of behavior.

Let me give you a real-life, personal example from my past. I was involved in a King James-only church that was literally a cult (the Bishop of the movement died in prison while serving time on a child molestation charge). We were taught that while there were other true believers, we could not leave that church because the Bible says that every man must “abide in the same calling wherein he was called” (1 Cor 7:20). The context, of course dictates that the “calling” spoken of here is not the particular church or ministry one was called to follow Jesus in, but rather the life circumstance (slave or free – v. 21). But who needs context when you are trying to control people! (OBTW, if you are ever considering starting a cult, use the old KJV, ’cause its a lot easier to do this type of thing).

Here’s another one of my favorites: “Of course tithing is a requirement for all New Testament believers. Jesus Himself said that you ought to tithe (Matt. 23:23)!” Never mind that in this context Jesus is rebuking His enemies (the Pharisees), not teaching His disciples! Don’t bother carefully considering the relationship between the Old Testament Law of the Tithe and the New Testament principles of abundant generosity, systematic & sacrificial giving. Don’t bother asking how does the tithe for the poor (a form of social welfare in the OT) parallel NT giving to support the religious establishment (staff salaries, real-estate, etc.) My point is not even to try to resolve the question of tithing in the New Testament (I’m sure you can find plenty of blogs on the internet about that, including here) but rather to make the point that citing one New Testament verse is hardly adequate to settle the issue. So why get involved in complex theological issues when you can simply cite a verse and the masses will follow!

One final thought. How about this one: choosing a particular translation of a verse which better supports the point you are trying to make. I’m not talking about choosing a translation because you have studied the Greek and believe it is most faithful to the original. I’m talking about picking a translation because it better supports my agenda and the point I am trying to make in my sermon, lesson or teaching! Once again, we are using the Bible to support our agenda, rather than placing ourselves under scripture’s inherent authority.

What do you think? Have you seen other examples of the abuse of proof-texting, or taking scripture out of context? Is there ever a time when proof-texting is appropriate? How can we avoid the pit falls?