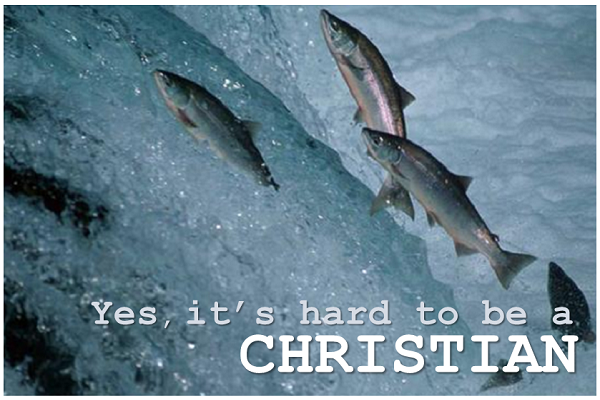 Are you one of the Christians who is finding it hard to follow Jesus?

My mind has been flooded this week with thoughts of so many brothers and sisters in Jesus.  So many struggle with their faith, with obedience to God, with long-standing addictions, with doubts and questions, with thoughts of whether or not it is even possible to live in joy and victory in this present age.

Over the past 27 years of being a Christian I have sadly watched as dear friends who once loved Jesus and served Him have turned back to the world, or turned away from following Jesus.  Many of them are sad, bitter, lost, and confused – but they seem certain that they just can’t follow Jesus anymore.

The phrase “it’s hard to be a Christian” keeps echoing in my mind as I think of what words of consolation I could offer.  But the idea that following Jesus is hard is actually part of the reason many of them are not following Him anymore.  In fact, it is because of a subtle belief that it is not supposed to be hard that some have given up.  It’s hard to resist the urge to blame the person who might have led them to Christ, or the pastor, or the friend who invited them into a non-existent, supposedly pain-free version of following Jesus.

Was He trying to make it hard?

The more I read about Jesus’ call to discipleship, the more it seems to me that he was not trying to make it easy to follow Him.  He wanted people to know that it would cost them everything.  They would have to be willing to forsake posessions, relationships, comfort, ease, popularity, fame, and many of the pleasures that this present, passing world affords if they wanted to be his disciple.  In the words of the German Martyr, Dietrich Bonhoeffer:

“When Christ calls a man, He bids him come and die.”

Bonhoeffer paid the ultimate price a short time later by dying a martyr’s death at the hands of Hitler’s Nazi regime.  He was a Christian pastor who publicly stood against the evils of the Holocaust.  After being imprisoned for about 18 months for “conspiracy,”  On April 9th, 1945, Bonhoeffer was led out of his prison cell, stripped naked, tortured by prison guards, and hoisted slowly off the ground by a rope around his neck for about 30 minutes until he died.  He never recanted his confesssion, he never said “why me, God?” he never wrote or said anything to accuse God of not being fair to Him.  He knew the Jesus who said, “A servant is not greater than his Master.” (read more about Dietrich Bonhoeffer here)

This is a far cry from the current popular call to a life of ease and comfort.  That brand of Christianity (if we can call it that) does not mesh with real life.  Jesus knew that.  He seemed to work overtime telling people, “This is not going to be easy!  This will be the hardest thing you’ve ever done!  You may have to die for your faith in me.”

“40 …and when they had called for the apostles and beaten them, they commanded that they should not speak in the name of Jesus, and let them go. 41 So they departed from the presence of the council, rejoicing that they were counted worthy to suffer shame for His name.”

The early Christians actually made a connection between suffering, persecution, difficulty, trials, tribulation, and pain – and following Jesus Christ.  They actually rejoiced that they got to be like Jesus (the suffering Jesus!!!).  They did not see the two things as incongruous or confusing.  That’s why Peter counseled believers in His first letter (1 Peter 4:12-17)

12 Beloved, do not think it strange concerning the fiery trial which is to try you, as though some strange thing happened to you; 13 but rejoice to the extent that you partake of Christ’s sufferings, that when His glory is revealed, you may also be glad with exceeding joy. 14 If you are reproached for the name of Christ, blessed are you, for the Spirit of glory and of God rests upon you. On their part He is blasphemed, but on your part He is glorified. 15 But let none of you suffer as a murderer, a thief, an evildoer, or as a busybody in other people’s matters. 16 Yet if anyone suffers as a Christian, let him not be ashamed, but let him glorify God in this matter. 17 For the time has come for judgment to begin at the house of God; and if it begins with us first, what will be the end of those who do not obey the gospel of God?

Therefore we also, since we are surrounded by so great a cloud of witnesses, let us lay aside every weight, and the sin which so easily ensnares us, and let us run with endurance the race that is set before us, 2 looking unto Jesus, the author and finisher of our faith, who for the joy that was set before Him endured the cross, despising the shame, and has sat down at the right hand of the throne of God.  3 For consider Him who endured such hostility from sinners against Himself, lest you become weary and discouraged in your souls. 4 You have not yet resisted to bloodshed, striving against sin.

What do you think? Does this resonate with you?