Do Soup Kitchens Denigrate the Poor (and create a wall between “us” and “them”)? 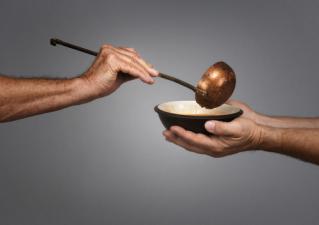 I recently read a comment in a long thread that I found to be pretty insightful, which asserts 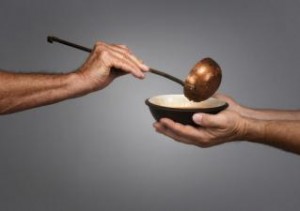 exactly that. Jim Wright makes a pretty good case for the idea that the way we typically help the poor (while well intentioned and does meet a real, felt, and very practical need) none-the-less ends up creating a wall of separation between “us” (up here) helping “them” (down there). Take a look at Jim’s comments and let’s discuss:

there are lots of good folks with good food and other service ministries. Some fellowships are called to that, and I think God looks with favor on it. But that will not result in any indigenous church in the community being served. It meets a real need, don’t get me wrong. But that’s not one of them.

There’s so much I want to say about this, and a comment likely will not cover it. But maybe I can queue* up a few things to consider.

Most food ministries and similar “outreaches” are appreciated by those being served, but they nonetheless reinforce the “us” and “them” cultural gap between you. Trust me. You are not meeting them where they are on their terms, but rather asking that they meet you on your terms of wanting to help fix them or their problems. You are asking them to come into your world – even if you take the food to them – because you are there to meet them on your terms of bring solutions from your status of having the better culture and lives.

Your motive may be right, and you might be meeting real needs, but you are NOT becoming part of their reality. They know this, very, very acutely. And although they will be grateful for the help, they will also know that they are being ministered to rather than their shared humanity being fully embraced as brothers and sisters.

I have discovered, as I go to subcultures on the fringe, to go to sit among them, where they live and on their terms, and listen, and laugh, and connect on the level of our shared humanity. I’m totally open about the Lord, but in the context of relating as one who respects them and wants what they have to share with me.

I don’t think it was an accident that Jesus and the apostles, as they too were sent, dined in the homes of with those they went to reach. Jesus and those He sent didn’t go to feed them in the places where they lived, but were willing to be fed by them and thus enter into their lives and community on their terms.

If you want to reach the homeless, for example, go gently into the woods and be willing to enter into their world. Ask to share their meal with them, on their terms. Sit and talk. In those conversations, you will hear the voice of God on how* to bring Christ into their reality and let Him establish His ekklesia there.

That is what it means to go. That is the key for much of what we are doing, and the fellowships we have seen emerge. We go into their reality, honor it and who they are (problems and all), treat them as worthy of Christ and our respect, treat them as those who also enrich our own lives, and then let Christ come alive among them.

It’s the difference between imperial church planting where we export our culture and expectations, and seeing an indigenous fellowship emerge within an existing community. It is the Luke 10 approach (although it took me years for God to burn out my contrary impulses and to slowly, through actually going, figure out how to be marginally good at it).

It is as much attitude as it is actual going. But it works.

Finally, here’s the biggest reason we seem to have lost the art of truly going. It requires us to step outside our comfort zones, and to then learn to be comfortable with those who live in contexts that we naturally are judgmental about. It is one thing to step outside our comfort zone to serve food to the poor, but quite another to truly enter into their comfort zones on their terms to meet them there as a brother and not as some well intentioned, but nonetheless imperial, Christian.

God knows it was a hard journey for me to get there. But I was willing to make the mistakes, be used and abused by those who took advantage of my initial naivity, and so much more that I had to learn. It took years of learning. But you only learn in the doing, as you go to listen and from there hear God’s voice for the next steps – if any.

*I did make two minor corrections (sorry, I’m a writer, I couldn’t help myself): one to a spelling error and I deleted a repeated word. Otherwise everything above is a direct quote.

Like I said, I found this to be pretty insightful and found Jim’s arguments to be quite compelling. What do you think? Is there something in the way that we typically approach ministry to the poor (as a handout) that inherently positions us effectively above them and drives a wedge between “us” and “them,” that serves as a barrier to genuine human interaction as equals? Is there a better way to engage in interchange, create connection, and ultimately genuine relationship with the poor? What do you think of Jim’s idea of entering into their world as the only way to truly make this connection?

Let me now your thoughts in the comments below.