When Revival Tarries I Ask Why 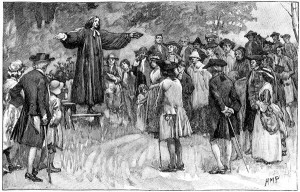 After what felt like a ton of reading for a class I took on the history of both the Evangelical and Pentecostal movements, I walked away with a deeper understanding of and appreciation for both of these traditions. I think Bebbington’s quadrilateral is still a helpful way to start discussing Evangelicalism and I will forever be grateful for Dr. Allan Anderson’s work on Pentecostalism, especially his observation that the charismatic tradition has an emphasis on experiencing the presence and power of the Spirit and a commitment to missions.

In addition to these characteristics, Evangelicals and Pentecostals have a desire for and openness to revival/renewal. There might be a variety of definitions for how moves of the Spirit are understood, but there is a common appreciation for the pneumatological experience. As we trace the history of these movements, moving through the first and second Great Awakenings and traveling into the Toronto Blessing and the Brownsville Revival, careful observers will note that significant leaders have both been involved in and led through these events. Whether we’re talking about George Whitefiled, Jonathan Edwards, and John Wesley or the late Steven Hill or John Wimber, Evangelical/Pentecostal leaders have been involved in (and often defended!) what can only be defined as revival.

However… I wonder if this is true of today’s Evangelicals and Pentecostals. I know there are people in these two traditions that would say they are absolutely committed to seeking for revival, but is this true for the majority of those who self-idenfity within this world? Would most Evangelicals agree that one of the most important things that we need is a great outpouring of the Spirit? Are most Pentecostals praying and fasting for a the Spirit’s spontaneous breaking into the now?

Of course, it’s probably important to note that my observations and questions arise primarily within a western context. Having spent time in Asia and Africa, I’m quite aware of the fact that the answer to these questions would be a resounding “yes!” But here in North America, and what I’ve experienced and observed in Europe, the answer is more likely a “sometimes” and “maybe.”

Why is this? Why are western Christians becoming either more apathetic, more complacent, more cynical. and more naive about the power, presence, and effectiveness of revival?

While overlooking the complexities involved toward defining revival or renewal, I’d love to read your thoughts on why the longing for revival appears to be replaced by many other concerns. I’m hoping your thoughts would help me for a sermon series I am thinking about putting together for next year that might end up as a small group study of some sorts.