Back to Church – An Ecclesial Journey, Pt. 4 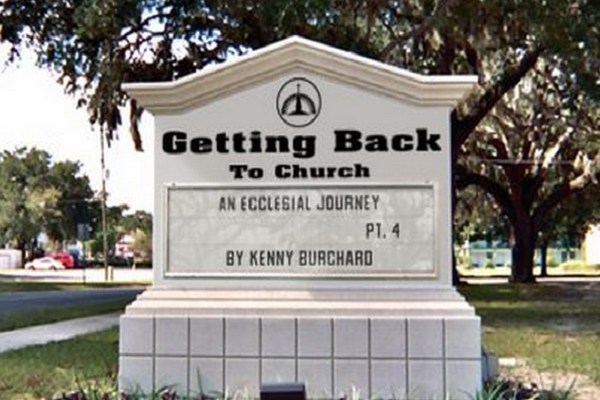 Should we even use the word ‘church’ when discussing ecclesiology?

The esteemed Luke Geraty has already suggested in a recent post that the word “church” is really not useful anymore in all our talk of ecclesiology. I agree with him, but I am afraid we’re stuck with the word forever. And honestly, that’s a true bummer because the word church is simply not what is meant by the word ekklēsia . Thus, for the rest of this post, I will use church very sparingly.

In reality, there is no way that translating ekklēsia into church even makes sense.  I wont’ comment much beyond that here because Luke has already done it. No use repeating ourselves… much. Church is simply not the best (or even close to the best) word for translating ekklēsia . There is really zero etymological relationship (and .000000001 % – if that much – nuanced relationship) between the ancient word ekklēsia and the word church. The two words simply do not correspond.

As a funny and related aside (then I’ll move on), it was interesting to see some of the dialogue on social media about Luke’s post, and one of the comments which read something like:

If the word ‘church’ was used by Jesus, then that’s good enough for me.

The word church is used in English translations of ancient Greek manuscripts, and is attributed to Jesus who may have been speaking Hebrew or Aramaic.

The evangelists who later wrote their accounts of Jesus’ words in Greek used the word ekklēsia. But Jesus never used the word church.

As a starting place for discussing the meaning of ekklēsia consider the opening paragraph of W. Elwel’s article:

The New Testament word for “church” is ekklēsia, which means “the called out ones.” In classical Greek, the term was used almost exclusively for political gatherings. In particular, in Athens the word signified the assembling of the citizens for the purpose of conducting the affairs of the polis. Moreover, ekklēsia referred only to the actual meeting, not to the citizens themselves. When the people were not assembled, they were not considered to be the ekklēsia. The New Testament records three instances of this secular usage of the term (Acts 19:32, 39, 41). [1]

It’s fairly typical for those who write about the church to focus on the composite structure of the Greek word ekklēsia (e.g. “the called out ones”), and to emphasize that the church is simply the people who have been called by God. But that is not going far enough. Such a conclusion has lead many Christians to say things like, “I’m called by God, so I am the church.” But that is an exegetical fallacy that misses the emphasis of how the word is actually used. As Elwell rightly points out, it is the aspect of gathering or even coalescing together for the business, work, mission, and function of the ekklēsia that makes it (dynamically, substantively, and functionally) the ekklēsia. In simple terms: No gathering, no ekklēsia. New Testament biblical scholar, Dr. Tim Geddert shared this with me in a recent correspondence about the meaning of ekklēsia:

The origin of the word (etymology) is obviously from ek plus kaleo (call out). But over time it shifted because of its use in Greek city states to “call out” citizens for a democratic assembly. The word gradually ceased to name the “calling out” aspect and apply to the “assembling” aspect. It is used in the LXX to refer to the “assembly of Israel” (so there the fact that they were “called out” of Egypt is not really part of the meaning of the use of the word.) So also in the NT, though it is true that some texts talk about us being “called out” (of darkness into light, etc.) the word ekklēsia does not label this aspect of our reality, but the assembly factor. Thus it is almost the same as synagogue (sun-ago . .  lead together). In fact in Matthew 18 Jesus refers to ekklēsia but then labels the church as those “gathered” around Jesus (using perfect passive of sunago . . . the are the “having been gathered, and therefore now assembled ones.”). I think that the idea of a “democratic assembly” is important to the meeting. No dictator or Roman Senate or Apostle or Bishop plays an overbearing role. Rather the church does business as a community. And I think that the fact that it is a political term (they made decisions for the welfare of the polis [Greek city state]) and so does the church act on behalf of God’s kingdom. Thus it is not a neutral term for the church. It is one of many metaphors and the metaphorical meaning is part of what shapes the emphasis of the sentences in which it is used. Just as we would not say “the body of Christ is a building” OR “the bride of Christ is a building” (since that just mixes metaphors), so we cannot say “the ecclesia of Christ is a body” . . . yet we do it in English a lot: “The church is a bride” etc. It is hard to know how that would have been said in Greek. We have only metaphors! [2]

Wow! There is a lot to unpack there, but I want to return to my own dynamic and working definition of ekklēsia from my previous post as a way of interacting with what both Dr. Elwell and  Dr. Geddert have said.

In the previous post, I offered my own dynamic, evolving, and working definion of ekklēsia in the form of five big ideas:

There is too much for a blog post to unpack here, so let me offer a few ideas to expand just a bit.

First – My working definition emphasizes the multi-ethnic (Jew-Gentile) People of God. From this perspective, the Church does not replace Israel. Rather, through Jesus, the ekklēsia embraces Israel’s mission and vocation to bless all the nations and bring them back into relationship with Yahweh. This was always the objective (Acts 13:47).  So, in Jesus, and through his ekklēsia, the mission of God moves forward.  Rather than there being one ethnic group that self-identifies as “the chosen people,” – Jesus re-connects believing Israel to Abraham’s call in Gen. 12:1-3. Thus, Paul can say in Ephesians 2:19-22 that Gentiles and Jews, together, are the people of God through Jesus (cf. also 1 Cor. 12:13, Acts 2:39, 10:45, 11:1, 11:18, Phil. 3:3).

Second – The idea of intentional gathering is inherent in the idea of ekklēsia. This is not merely a lever to move people to attend church services. Rather, it is an appeal to the essence of what it means to be ekklēsia. If we are not gathered together, if we are not co-laboring, sharing, working, worshipping, praying, discipling, and living in community, we are not able to understand what it means to be church. This is where the idea of being and doing can converge.  When we gather together, God’s work among us, in us, and through us can happen (cf. also 2 Cor. 6:1).

Third – The ekklēsia gathers itself around Jesus as Lord, or gathers “around the Lordship of Jesus.” This is an important idea in a church culture that is saturated with the idea that a church gathers itself around a senior pastor’s vision for the church.  That is simply not a New Testament idea, though it is all the rage for pastors to imagine that leadership in the ekklēsia  is about being like Moses, holding up a staff, and point the way forward to fulfill their grand ambitions for the church. Intentionally gathering around the Lordship of Jesus helps to keep the Jesus-following ekklēsia bound to Jesus’ timeless mission which is to re-gather the nations back to God through his cross. This does not mean that there are not leaders in the ekklēsia. There are! But leaders in the ekklēsia are there as a collaborative group of men and women, gifted by the Holy Spirit to equip God’s people to carry out the mission of Jesus. If we gather around anyone’s mission for the Church it is the mission of Jesus to re-gather the nations back to God in Him (Mat. 18:20).

Putting it all together…

The ekklēsia is very simply the People of God, Jew and Gentile, re-gathered to Yahweh through his anointed vice-regent, Jesus. They are most visibly, most dynamically, and most powerfully the ekklēsia when they are gathered together around the Lordship of Jesus. And wherever two or three of them gather in His name, He is there with them. Their shared allegiance, attention, obedience, and focus is on Jesus as Lord. Their message to the rest of the world is “Jesus is Lord,” and their work in the world is to know Jesus – to know what he has taught, to live what he has commanded, and to bring people from every nation, kindred, tribe, and tongue back into fellowship with God through Jesus.

That is my own pared-down understanding of Church. Period.  So, you have what ekklēsia IS, and embedded into that is what ekklēsia DOES. There is a ton of New Testament material about what ekklēsia HAS too, but it is not referencing anything locative, material, or physical (in terms of money, land, buildings, and equipment). Rather, it is in terms of world-changing resources (e.g. spiritual gifts functioning in the lives of men, women, and children who make up the ekklēsia – and who are, when they are gathered, the dwelling place of God by the Holy Spirit — the meeting-place of heaven on Earth, no matter where they are on the earth).

More needs to be said about Tim Gedderts comments surrounding ekklēsia as a metaphor, but we’ll leave that for the next post.

In the meantime, jump in to the comments. What is this discussion provoking in you by way of questions, comments, added insights, push-back, or anything else?