Enablers of the Exodus 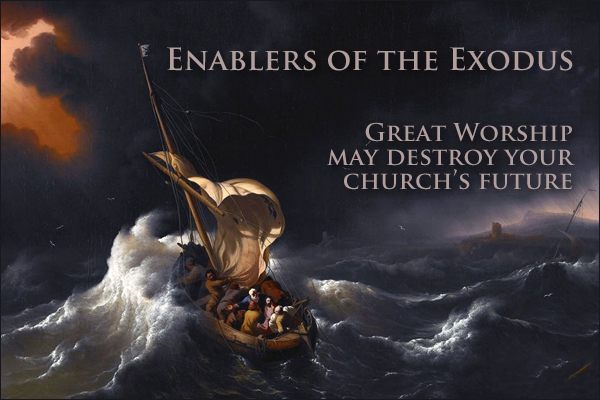 In any dysfunctional relationship, there are several roles that are enacted: the Perp, the Victim(s), and the Enabler(s).

Since ministry is a relational theatre, it should come as no surprise that for every dysfunctional situation that can be encountered, there are inevitably enablers supporting the dysfunctional system.

In linking the Loyal Liar syndrome to worship leaders and worship bands, we would be remiss not to ask ourselves where and how enablers are rewarding and supporting a system where Loyal Liars can flourish.

On one hand, some of these worship leaders and band members have gradually seen their own personal faith eroded over the years, and they just haven’t yet come to the place where they feel the need for full disclosure. And once they decide to “de-cloak”, like a Klingon Bird of Prey off the starboard bow in Star Trek, they are often relieved to step down from worship leading. Cognitive dissonance ‘n’ all.

On the other hand (and the point of this post), there are the Loyal Liars who continue on, despite leaving (or never really having) a deep faith in Christ Jesus. These are the ones who require enablers in order to happily lead worship week-in and week-out, even if they don’t believe a word they’re singing.

(Although it’s rare, I have listened to some of these musicians and leaders sitting around laughing at the same congregation they’ve just led in worship.)

But this post is about the enablers, not those who have been enabled.

Yes, I’m looking at you, church leadership and pastoral team.

There’s nothing wrong with those desires. I love the intent behind them.

But what price are you willing to pay, in order to achieve them? (Assuming that you’ve discerned correctly what the younger generations would be willing to embrace.)

There’s an old expression that I think pretty much every leader I’ve ever met has used at one time or another: “Character before gifting.”

It’s an important tidbit of wisdom. Paul wrote some helpful and very specific advice to his protégés, Timothy and Titus, about the kind of character that anyone leading (including leading worship) should have. (Think of the worship leaders as ‘elders’ and their bandmates as ‘deacons’.)

While worship leaders and their bands don’t hold “official” leadership roles in churches, they are just as visible — usually more so — than most of your leadership team, week in and week out. They are leaders in your church. Their character matters.

But in the rush for relevancy and to attract the younger generation, the “character before gifting” wisdom gets lost.

The result: A lot of extremely talented singers and musicians are recruited to give any given church the “cutting edge relevancy” that is assumed will attract or retain the younger generation. The band sounds professionally awesome, your church’s reputation soars, and worship experiences are carefully crafted each week. And your church (attendance) grows.

But the down-the-road fruit is seen in the younger generations who follow the example of their (worship) leaders: partying on Saturday, worship on Sunday, and not noticing any discrepancy between the two. Feeling a sort of superiority to those who “actually believe all this stuff”. Looking down their noses as they dismiss Christians who take personal holiness seriously as rigid and pharisaical. Feeling a sense of embarrassment that they ever viewed worship seriously as an encounter with the Living God.

And eventually, they either become life-time members of the Loyal Liars Club, or (more often) just quit the pretense and leave the church.

Pastors and Leadership teams, please help put a stop to the exodus of the younger generations from church (and often from the faith). Stop enabling a culture of Loyal Liars In Worship, in your dogged pursuit of the hottest worship band in your city. The price tag is too high.

Character Before Gifting. Please, before it’s too late.