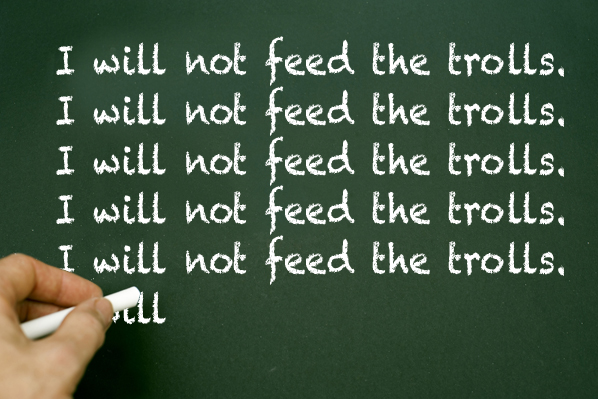 King Solomon repeatedly observed throughout the book of Ecclesiastes that “there is nothing new under the sun”. This has certainly been true whenever I run across (or into) “trolls” in greater blogdom.

Any other old-timers remember the firey anti-Christian rock crusades of the 1980’s? There was no reasoning with these crusaders. There was no discussion. Many times, factual exaggerations or outright falsehoods were employed in order to “prove” their point.

“Christian love” was viewed as a weakness to be overcome; the goal was to crush their adversaries. Like St. Paul before his conversion, they thought they were doing God a favour. Anyone who questioned their attitude, research, or conclusions was immediately denounced as rebellious (and possibly unsaved).

The same was true with many anti-charismatic crusaders in the 1990’s. Same harsh and venomous attitude. Same questionable methodology and twisting of facts. Same refusal to listen, to dialogue, to understand. (Most recent example of sameold sameold would be the Strange Fire conference.)

Jump forward to the early part of the 21st century, and we find the same attitudes, same questionable methods (“six degrees of Googled separation”, somebody creatively called it), same willingness to use false accusations, same twisting of words, same exaggerations, and same occasional use of outright falsehoods. There is nothing new under the sun.

And whenever you attempt to defend, explain, dialogue, or set the record straight, there is the same reaction: they only intensify their efforts. Nothing changes.

If you try to interact with them, they simply continue to attribute positions to you that you don’t really hold, exaggerate or twist your words to mislead people, use all kinds of judgmental and pejorative labels and false accusations, and totally ignore any Scriptural basis you provide for what you believe.

Nothing changes. Nothing at all. It’s a waste of time and energy. Absolutely nothing changes, nor will it change. Ever.

Oh wait, there IS one very significant thing that changes:

Yes, I change. I get offended. I get defensive. I try to explain myself. I try to set the record straight on what I REALLY believe. I try to correct the falsehoods and exaggerations. And in the process, I change.

I start to resemble a “son of thunder”; the kind of person that Jesus rebuked (Luke 9:52-56). I cease to resemble someone who is called to encourage and build up the Body. I look more like John Boanerges than the “apostle of love” that John later became known as.

I risk spending far too much time defending myself, when in reality, I don’t answer to these people. Why is their opinion of me of any importance at all? Do I really “need” to defend myself?

Perhaps I need to begin to practice a new spiritual discipline: stay out of useless arguments and avoid divisive people (Titus 3:9-10). Partly because it’s a waste of time, energy, and emotion, but mostly because of how it affects my own walk of faith as a follower of Jesus, a disciple and an apprentice.

I don’t want to be a son of thunder. I want to learn how to live more like Jesus.