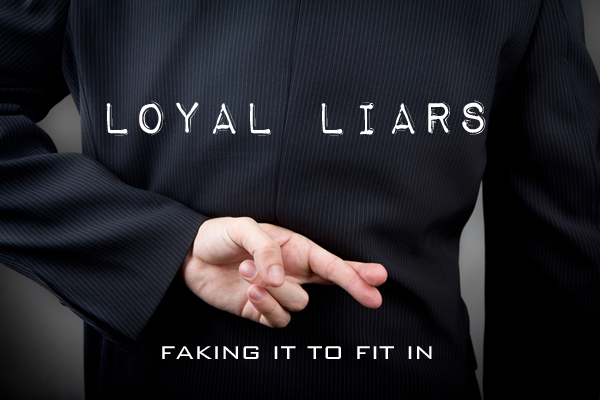 Years ago, a new term was introduced into church jargon: the Loyal Liar.

It was first used in a fictional story about an older liberal professor mentoring a young Pentecostal pastor into giving up his faith, yet continue to be a pastor.

To be a Loyal Liar was the cold & calculated decision to pretend that you still believed in Christianity, preach sermons you didn’t believe, pray prayers to the ceiling, and collect your pay from the unsuspecting church. (That’s cold, dude…)

One was reading about the seven-year prison term given to the (now former) lead singer of a popular Christian metal-core band; seems he had tried to arrange the murder of his estranged wife, which is a no-no in most religions, particularly Christianity. And if that wasn’t enough, an interview that he gave just before his sentencing revealed a disturbing side to both the singer and the band he led:

The other incident was a comment from a young worship team member, after I had complimented the team for their worship leading:

“Thanks! It really makes a difference when the band actually believes what they’re singing!”

But on the other hand, this young singer has been around long enough to know that there are also a lot of worship leaders who would also fit the Loyal Liar persona.

And in other conversations with 20-something worship musicians, I am hearing stories of increasing disillusionment about the number of their worship-leading peers who “play act” in worship, but don’t believe what they’re singing about.

“And the partying…” lamented one guitarist. “They don’t even try to hide it. And they think I’m weird because I don’t join in…” (sounds like things others have experienced, including yours truly)

Take a long, hard look at my own life. In what ways do I not reflect the character of Jesus? ouch…

It’s always a good idea to look in the mirror first. Because even at our best as Christians, we get to play the role of the tax collector in this parable that Jesus told (at least, we should; the other option isn’t very appealing):

“Two men went up to the temple to pray, one a Pharisee and the other a tax collector. The Pharisee stood by himself and prayed: ‘God, I thank you that I am not like other people—robbers, evildoers, adulterers—or even like this tax collector. I fast twice a week and give a tenth of all I get.’

“But the tax collector stood at a distance. He would not even look up to heaven, but beat his breast and said, ‘God, have mercy on me, a sinner.’ I tell you that this man, rather than the other, went home justified before God” (Luke 18:9-14)

Encourage anyone you know that (as the singer said to me earlier). represents “the band that actually believes what they’re singing”.

I believe God is already moving among many people, including singers & musicians, to rise to a higher standard of putting their morals, ethics, and talents where their faith is. In other words, “conduct yourselves in a manner worthy of (consistent with) the gospel of Christ” (Philippians 1:27)

Pray like crazy for any Loyal Liars that you meet. Don’t judge them (remember the Pharisee in Luke 18?). Pray for them.

An old expression that many of us have said many times: “Lord, break our hearts with the things that break Yours”.

I think this qualifies.