Getting the Gospel (W)right… 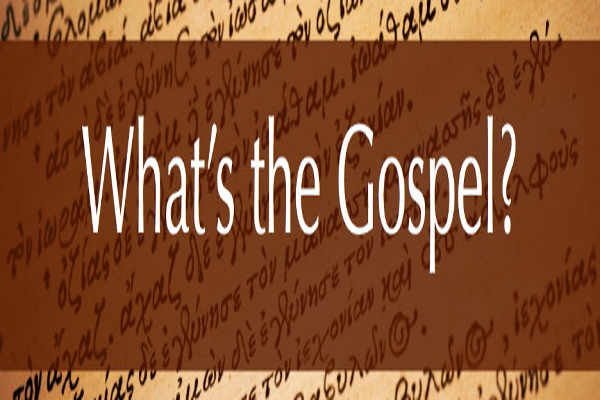 Let’s start with an exercise. Push away from this post for a minute, and do your best to either say aloud or write down your answer to the question – “What is the Gospel?” Make it as concise as you can possibly make it.

John MacArthur’s emphasis centers hard and fast on the atonement theory of Penal Substitution, and elevates as primary, the idea that God treated Jesus on the cross just like he was a sinner, and treats us as if we had never sinned. It’s not hard to catch his focus on the doctrine of justification by faith through penal substitutionary atonement as the meaning of the gospel.

Tim Keller’s emphasis (which begins with comments directed at those who preach in the public square), is — “Jesus Christ’s death and resurrection in my place” (@ 2:20-25).

Ravis Zacharias’ emphasis is on existential emptiness and loneliness by virtue of alienation from God which is resolved by the work of Jesus, re-bridging relationship through forgiveness.

Michael Horton’s emphasis in on the word euangellion as the announcement of victory after battle paired with the saving work of Jesus in extending eternal life, forgiveness of sin, and the crushing of evil.

Sam Storms’ emphasis is the sinless life, atoning death, and subsequent resurrection of Jesus as a means by which forgiveness of sins is offered to those who repent of sin and respond with faith.

You can continue scouring YouTube on your own for dozens and dozens more clips just like these.

My central question in this post is — are all of these men saying the same thing when answering the question, “What is the Gospel?”  From my perspective the answer is yes and no.

There is emphasis in most of them on Jesus’ death, burial, and resurrection. However, interestingly, John MacArthur doesn’t refer in any way to the resurrection of Jesus in his emphatic insistence that 2 Cor. 5:21 is the “most Gospel centered text in the New Testament” (which makes me wonder if he forgot about 1 Cor. 15:1-8).

Tim Keller gives the most succinct answer with very obvious allusions to 1 Cor. 15:3-4 (after responding to some imbalances often seen among street preachers in the first 2 minutes of his answer).

Ravi Zacharias focuses on existential meaning and fulfillment through what Jesus has done.

Michael Horton and Sam Storms are very similar, though Horton emphasizes the announcement of Victory through the work of Jesus, and Storms emphasizes the work of God in Jesus as the central idea in the Gospel (e.g. – God’s grace toward undeserving sinners).

In every case the idea of the gospel being something that results in forgiveness of sin is very central.

This past week I listened to a N.T. Wright podcast entitled “Jesus and the Kingdom – Today and Tomorrow.” Among all of his other thoughts, Wright said this at the 9-minute mark:

“Somebody asked, ‘What is the good news? Is it the atonement? Is it the coming of the Kingdom? It it all of the above?’ In Paul’s letters, the good news is — ‘The Crucified and Risen Jesus is the Lord of the World.'”

That’s it. That is Wright’s summary of the gospel (based on the writings of Paul in particular) in only 11 words.

He went on to say…

It was interesting to hear Michael Horton unpack the word euangellion as an announcement (another definition for the word) made by a messenger after a victorious war campaign. This can be set in contrast to MacArthur’s emphasis on penal substitution, and emphasizes Cristus Victor (Christ is victorious) as a primary lens for interpreting the meaning of the word Gospel (cf. Jn. 12:31, 1 Jn. 3:8, Heb. 2:14-15, 1 Cor. 15:25, Lk. 11:21-22, Col. 2:15, etc – as other really-really-really Gospel-centered texts in light of good news as a victory announcement).

While there is no doubt that this word-picture is embedded in the way the ancient word was used (and does help to give the word Gospel a more robust meaning), there are illustrations that connect even better to what N.T. Wright is trying to say by centering the idea on the Lordship of Jesus after his crucifixion and resurrection.

In Matthew, Jesus makes an unmistakable statement about he was thinking about it in the preamble to the Great Commission (cf. Mat. 28:18).  For Jesus, the announcement that the disciples were to make was based on something dramatic that had happened after Jesus had been raised from the dead. Namely, that God had handed the whole world, including all authority to rule in heaven and earth, over to Jesus. The disciples were to announce that message of good news with every kind of person in the world, and call them to re-align their lives with that new reality.

Perhaps this is why Wright says in other places that the word gospel is at base, a reference to a “royal announcement” [1] about a King:

The idea of ‘good news’, for which an older English word is ‘gospel’, had two principal meanings for first-century Jews. First, with roots in Isaiah, it meant the news of YHWH’s long-awaited victory over evil and rescue of his people. Second, it was used in the Roman world for the accession, or birthday, of the Emperor. Since for Jesus and Paul the announcement of God’s inbreaking kingdom was both the fulfilment of prophecy and a challenge to the world’s present rulers, ‘gospel’ became an important shorthand for both the message of Jesus himself and the apostolic message about him. [2]

I’ll end with a quote and reference to this idea that I have discussed before here:

According to Wright’s summary of the Gospel, it is a royal announcement that Jesus is King, and is to be obeyed as King. For those who accept Jesus on these terms, they enter into the present work of God happening through Jesus, and are also promised that they will share in the eventual and climactic results of where that project is ultimately headed (Jesus’ resurrection being the precursor to what God has in mind).  In short, Wright seems to be saying that the Gospel is “Jesus is King – obey Jesus.”[3]

[3] Should every sermon contain the Gospel?