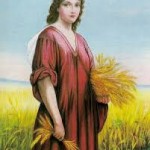 Ne 13:1–3… On that same day, as the Book of Moses was being read to the people, the passage was found that said no Ammonite or Moabite should ever be permitted to enter the assembly of God. 2 For they had not provided the Israelites with food and water in the wilderness. Instead, they hired Balaam to curse them, though our God turned the curse into a blessing. 3 When this passage of the Law was read, all those of foreign descent were immediately excluded from the assembly.

Ruth, because of its spin and political nature, would not find much favor in the eyes of fox news. Should we just call a spade a spade after reading these passages and admit that the book of Ruth is actually just a book of liberal compromise?

By just being a Moabite you were nothing. One who did not belong in and among Gods kingdom people. A Moabite was an outcast, they, like me, “were by nature children of wrath, like the rest of mankind” and “separated from Christ, alienated from the commonwealth of Israel and strangers to the covenants of promise, having no hope and without God in the world.”

Moabites similar to homosexuals were despised among the community of God. What lessons could we learn about the nature of God’s (and His community’s) redeeming grace and loving kindness or “khesed” as displayed in the book of Ruth toward a Moabite woman (in the lineage of David and Jesus) that could help us change the way we  fellowship with those who are homosexual believers and unbelievers? How are you and I any different than Ruth?