The Cross: A Call to Radical Obedience 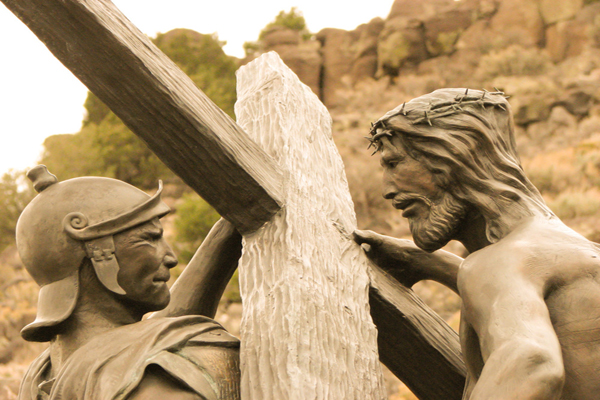 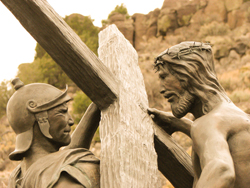 Remember, Jesus had not yet been crucified when He used these word-pictures, and He had not told His disciples about the manner of His own death at this point. He had not said to them, “I’ll be dying on a cross.” So it does not necessarily make sense to interpret these words as… “…so you should be willing to die on a cross too – just like me.” It is unlikely that they would have equated his words with a reference to his own death at all.

Perhaps there is something else we need to see here.

Is Jesus telling His disciples that they would be dying on crosses? Is He telling them that they need to be willing to be murdered for the sins of others? What is this “taking his cross” and “follow me” language about, if it is not about Jesus calling His followers to die on crosses (which would happen to several of them, by the way)? Let’s take a closer look…

THE IMAGE OF TAKING A CROSS & FOLLOWING

Matt 16:24 – “Then Jesus told his disciples, “If anyone would come after me, let him deny himself and take up his cross and follow me.”

Mark 8:34 – “And calling the crowd to him with his disciples, he said to them, “If anyone would come after me, let him deny himself and take up his cross and follow me.”

Luke 9:23     “And he said to all, “If anyone would come after me, let him deny himself and take up his cross daily and follow me.”

The Romans crucified thousands of people on hill-tops and road-sides during the days of Jesus. On the day that Jesus was crucified, there were two others with him. That’s three in one day. It was common to see condemned men dragging cross-beams up hills behind Roman soldiers who urged them along, giving them no rest, and marching them to their deaths. Jesus and his disciples likely passed by multiple crucified and dying men on their walks from place to place, and likely witnessed many men on their final journey from their condemnation to their cross. The point is His disciples had this “cross-bearing condemned man following a soldier” imagery in their minds long before Jesus was crucified.

Consider the possibility that Jesus may have even been watching (or had recently passed by and witnessed) one of these pre-crucifixion death marches with his disciples at the exact moment that he said, “If anyone desires to come after me, let him deny himself, and take up his cross daily, and follow me.”

IMAGINE THE SCENE AND HEAR THESE WORDS ANEW

In the picture Jesus paints with his words, there is one man leading with all power and authority over the man who is following, and who has absolutely no power or authority over his own life. One is absolutely in control of the other’s life from the moment he picks up his cross until the moment he dies upon it. This is a picture of one person being in total and complete control over the life and death (and every step in between) of another person.

Jesus said “to be my disciple, you must be the one carrying and following, for I am the one leading. I must be allowed to be in front, making every decision, and in complete control of what happens to you – of your choices, your steps, your identity, and your ultimate destiny. If anyone does not want this level of submission to my authority, he cannot be my disciple.”

CAN YOU DRINK HIS CUP AND ACCEPT HIS BAPTISM?

Mat. 20:20-28 – “20 Then the mother of Zebedee’s sons came to Him with her sons, kneeling down and asking something from Him. 21 And He said to her, “What do you wish?” She said to Him, “Grant that these two sons of mine may sit, one on Your right hand and the other on the left, in Your kingdom.” 22 But Jesus answered and said, “You do not know what you ask. Are you able to drink the cup that I am about to drink, and be baptized with the baptism that I am baptized with?” They said to Him, “We are able.” 23 So He said to them, “You will indeed drink My cup, and be baptized with the baptism that I am baptized with; but to sit on My right hand and on My left is not Mine to give, but it is for those for whom it is prepared by My Father.” 24 And when the ten heard it, they were greatly displeased with the two brothers. 25 But Jesus called them to Himself and said, “You know that the rulers of the Gentiles lord it over them, and those who are great exercise authority over them. 26 Yet it shall not be so among you; but whoever desires to become great among you, let him be your servant. 27 And whoever desires to be first among you, let him be your slave— 28 just as the Son of Man did not come to be served, but to serve, and to give His life a ransom for many.”

A few of Jesus’ disciples were following Him for what they would personally get out of it. They saw Jesus as the ticket to their personal success and empowerment. Many people today seem to look at following Jesus in the same way: “I follow Jesus because I want him to make me rich and powerful.” Jesus confronted this twisted motive by asking them if they were willing to “drink the cup that I am about to drink” and “be baptized with the baptism that I am about to be baptized with.” He goes on to tell them that they would have to drink the same cup, and receive the same baptism. It is in the garden of Gethsemane, just before Jesus is taken by force to be tried, scourged, crucified, and killed that he identifies the meaning of “the cup.”

Matt 26:39 – “And going a little farther he fell on his face and prayed, saying, “My Father, if it be possible, let this cup pass from me; nevertheless, not as I will, but as you will.”

Jesus, in his moment of agony in Gethsemane, asked God if it was possible to redeem fallen man in some other way besides death on the cross. Nevertheless, rather than attempting to put forth another plan, or run from the will of God, Jesus fully submitted to God.

JESUS IS THE MODEL-EXAMPLE OF OBEDIENCE TO GOD

Phil 2:8 – “And being found in human form, he humbled himself by becoming obedient to the point of death, even death on a cross.”

Heb 5:8 – “Although he was a son, he learned obedience through what he suffered.”

Heb. 12:2 – “looking to Jesus, the founder and perfecter of our faith, who for the joy that was set before him endured the cross, despising the shame, and is seated at the right hand of the throne of God.”

John 5:19 – “So Jesus said to them, “Truly, truly, I say to you, the Son can do nothing of his own accord, but only what he sees the Father doing. For whatever the Father does, that the Son does likewise.”

John 8:28 – “So Jesus said to them, “When you have lifted up the Son of Man, then you will know that I am he, and that I do nothing on my own authority, but speak just as the Father taught me.”

Jesus did not prescribe his own terms to God, and then attempt to get God to bless him. He refused to live in any way contrary to the will of God. When he called his disciples, he essentially told them that if He was not allowed to be in complete control of their lives in the same way he submitted himself to obedience to God, they could not be his disciples. He modeled the ultimate obedience by submitting himself to death on a cross.

THE CROSS: OUR CALL TO OBEDIENCE TO JESUS CHRIST

Phil 2:5-8 – “Let this mind be in you which was also in Christ Jesus, 6 who, being in the form of God, did not consider it robbery to be equal with God, 7 but made Himself of no reputation, taking the form of a bondservant, and coming in the likeness of men. 8 And being found in appearance as a man, He humbled Himself and became obedient to the point of death, even the death of the cross.

The Cross was Jesus’ ultimate act of submission to, and obedience to God. Jesus told his disciples that unless they were willing to wholly submit themselves to him in every way – like a cross-bearing condemned man is submitted (even unto death) to a Roman soldier, they would not be worthy to claim him as Lord.

In short – Jesus demanded total obedience to his will in order to claim him as Lord.

Anything less is “unworthy” of him, and unless we accept this we cannot be his disciple.