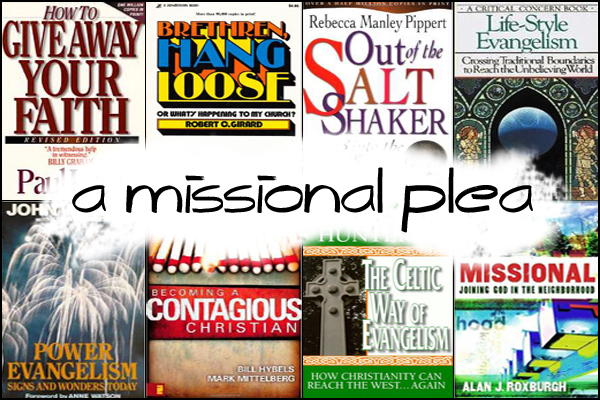 These book covers are representative of dozens, hundreds — nay, perhaps multitudes — of books that all basically point to the same thing: Christians need to engage our culture.

Yes, of course, the methodologies advocated by each of these authors varies widely. Bob Girard was all for destructuring church down to house groups; Joe Aldrich advocated a friendship evangelism approach; John Wimber encouraged people to combine “proclamation and demonstration” via the use of spiritual gifts; Bill Hybels is the guru of the seeker-sensitive attractional model; Alan Roxburgh is one of many voices advocating the most recent “missionary to your own neighbourhood” approach.

And here’s the inconvenient truth: all of these methods have, and continue to, bear fruit.

Not perfectly, to be sure. Not entirely in a “one size fits every church or denomination or city or local neighbourhood” manner. But if we take an unfiltered look (ie. without wearing jaundice-coloured glasses or our-way-is-better blinders), we should be able to concede that God hasn’t exactly been handcuffed, waiting until we finally get our methodology just right.

One of the most helpful additions from the recent emphasis on being missional has been the focus on “what is God already doing in your neighbourhood”? (Similar approach to Joe Aldrich’s question: “What’s in your toolbox already?”, only from a different starting point.) Jesus once said, “My Father is always working” (John 5:17), and as the example of Peter being sent to Cornelius’ house as a result of Cornelius’ prayers (Acts 10:30-33) demonstrates, God is constantly on the move, and we get to participate with Him.

The focus on discerning what God is already up to in our cities and neighbourhoods is a good one; no doubt about that. But sometimes — and I’d like to quickly point out that it’s probably unintentional — there seems to be an unspoken assumption that everything that current churches have done and are doing, is ineffective. Perhaps even counter-productive.

Or at the very least, kinda lame and out-of-date.

So here’s my missional plea:

If we believe that it’s possible for us to discern how God is already at work outside of our churches, and therefore we can learn how to cooperate with what His Spirit is up to, why shouldn’t we equally expect that God is still at work inside our churches, and seek to wed the two.

Look again at the publication years from the small sampling of books at the top of this post. In the five decades that I’ve been alive and on Planet Earth — without exception — books have been and are being written to encourage Christians to be culturally engaged as apostolos (sent ones) of Jesus Christ.

Missional is no more the “magic silver bullet” than seeker-sensitive or power evangelism. We don’t need to poo-poo one approach to bolster the validity of another. If we’re wise, we’ll learn from many streams and — with the guidance of a Holy Spirit who is far more invested in this project that we could ever be — craft something that fits our church, our neighbourhood, and our city.

Two quotes to ponder and apply, from the old boys’ club: