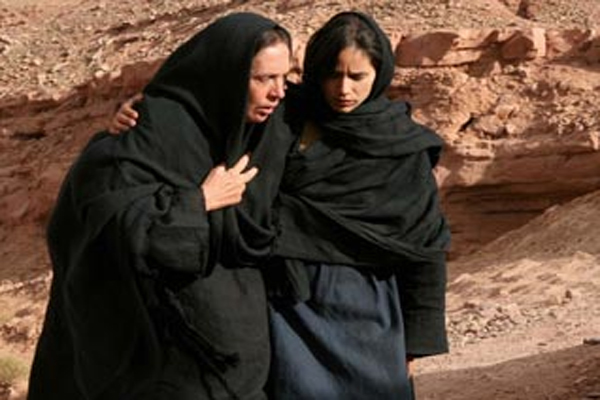 The entire biblical text and the reading below are meant to be read aloud in the company of friends and fellow believers, followed by discussion, confession, and prayer.

They certainly weren’t thinking of it as Easter Sunday. But it was! It was the first-ever Easter Morning, after the Sabbath, early on Sunday.

You and I think of these as the hours to get up, have our Easter pancake breakfast, watch the kids tear into their Easter baskets, and get ready for the morning celebration, followed by a full day festivities and time with fellow believers. But not this morning.

The lens of Matthews literary camera is zooming in slowly on two grief-stricken and disoriented women going to see the tomb of Jesus. No doubt they got up early that morning expecting to have another bad day. They hoped to see, and to care for the body of Jesus as he lay dead after his crucifixion.  As the lens pulls in tighter, you can see that it’s Mary Magdalene, formerly demon possessed, but now a mourning follower of Jesus, and “the other Mary” (cf. Lk. 8:2, Mk. 16:9, Mat. 28:6).

According to Matthew’s account, when they arrived at the tomb, they didn’t find Jesus dead as they expected. They didn’t find him at all. Rather, they found an angelic messenger sitting on the displaced tomb’s stone, having just scared the guards unconscious. But to these two unsuspecting women, the messenger said,

5b “Do not be afraid, for I know that you seek Jesus who was crucified. 6 He is not here, for he has risen, as he said. Come, see the place where he lay.

The word lay in the original language is an imperfect indicative verb which essentially means that the messenger said — “Come see the place where he used to be laying down, but isn’t laying down anymore!”

And what accounts for this?  According to the messenger, Jesus has been raised!  In Matthew, he doesn’t say, “He got up,” but rather, “He has been raised up” — pointing not to something Jesus has done, but something that has been done for Jesus. The implication is that God has raised Jesus from death, and has reversed the death sentence against him (which had already been carried out).

Aside from the amazing elements of Matthew’s account, such as an earthquake, the appearance of a brilliant heavenly messenger who rolls away a grave stone and sits on it, and the messenger’s announcement to the two Marys that Jesus isn’t dead anymore — something else is amazing about this account, and it should not escape our notice.

In the Gospel of Matthew, both an angel and Jesus himself first appear to women, and both commission them to go share the news with the other disciples.

An early pagan critic of Christianity named Celsus (AD 175) wrote a polemic about the implausibility of the Gospel accounts in part because the first witnesses to the resurrection mentioned in the Gospels were women. Celsus characterized one of the women as a “hysterical female” (for which there is no proof in the Gospel writings at all). [1]

Some living in our day might ask, “So what? What’s the big deal with that?” Why does Celsus think that women as first-witnesses is such a scandal and a good reason to dismiss the entire Christian message?  The big deal is that in Jesus’ day (especially among Jews) women simply could not (and were told they should not) be called as witnesses for anything important.

Why do I say this is significant?  Because in the face of an entire worldview that dismissed the relevance of a woman’s testimony, Jesus (who would have known this) called women to be in  his company of disciples. And on the day when the New Creation began, and the curse on the world began to be reversed, an angel appeared to Mary and Mary, and said to them — “Go and tell his disciples…” (Mat. 28:7), and Jesus himself appeared to them and said “Go and tell my brothers…” (Mat. 28:10).

Perhaps this occasion (as well as the other Evangelists’ accounts in Mk. 16:1-8, Lk. 24:1-12, and Jn. 20:1-13) should inform our present-day conclusions about what the message of the resurrection means for women who follow Jesus (and for the men who listen to them when they preach — yes preach — the most important doctrine in all of scripture).

Would Jesus ever send a woman to preach to a man?

To see the resurrected Jesus, and then to be personally sent by him to declare the resurrection seems to be the quintessential definition of an apostle based on the conclusions of people who want to formulate such definitions.

Jesus began the New Creation project by first sending people who would typically be disregarded as legitimate witnesses. Then he showed up to all the people who doubted them (and wrote them off as crazy-talkers… because they were women!) in order to verify their message (cf. Lk. 24:10-11).

That is a powerful picture of what happens in the world after the resurrection.

The old has passed.

The new has come.

And so, Jesus says… Mary, Mary, go and tell!

Jesus, Risen Son of God – first-fruits of a New Creation, we adore you and we announce your resurrection. Both men and women, sons and daughters, those of high stature, and those who are humble gather around you and proclaim you as King. In you there is no longer Jew or Gentile, Bond or Free, Male or Female. We rejoice to receive your command to go and tell of your resurrection.

This reflection is written for the Sunday reading of Mat. 28:1-10 in the Revised Common Lectionary in LOGOS Bible Software.

[1] cf. Green, J. & McKnight, S. Dictionary of Jesus and the Gospels 1992, IVP pp. Article: Women 4.3 “Women as witnesses to Jesus’ resurrection.” This article may also be of great interest to readers who wonder, “But what about what Paul says about women in his letters?” The authors do a great job of putting those texts into their appropriate local and historical contexts in order to make sense of Paul’s instructions regarding women preaching, teaching, etc.