A Little Exercise for Young Theologians – by Helmut Thielike 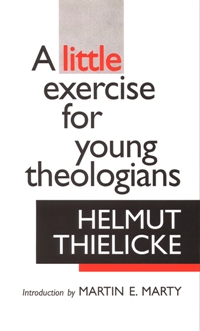 I just finished zipping through Helmut Thielicke’s (pronounced tea-LICK-eee) great little book entitled, A Little Exercise for Young Theologians. I hadn’t even heard of this book until I read a quote from it in another book last week. The title (and the idea behind it) intrigued me, and I bought the Kindle version the same day. It only took a couple (very enjoyable, though sometimes painful) hours to read the whole thing.

Where was this book three years ago when I started seminary? Where was it 20 years ago when I started preaching and teaching the Bible? It was there all along, and I just didn’t know about it! Well, it’s too late for regrets, but a great time to chew on the insights Thielicke shares with seminarians and theologians (and the people who have to put up with them/us) while we learn and grow in our discipline.

The book is essentially a series of short talks that Thielicke used to give young (or new, or both) seminary students as they began their scholarly training. In reality, it’s probably one long talk broken up into bite-sized pieces. He was the wise and erudite, yet firm and fatherly sage who was sent out before classes began to warn the first-year students about the dangers, toils, and snares that accompany the process of engaging in theological and biblical studies at an academic level.

The book itself is likely a transcription of these talks as he originally gave them. So, while I was reading it, I tried to imagine him standing in front of a room full of first-year seminarians while he, with all the finesse and shock of a velvet hammer, put them all in their places. There were not a few occasions when, as I was reading, I thought of my own behavior, attitudes, words, and actions at home, at church, on social media discussions, and in the seminary classroom as I was learning new things.  My reflections were a combination of, “Thank God I never pulled that rookie move,” and “Oh. Man. I did that, and worse. I’m so embarrassed” (I won’t share any of those stories here).

The book has a rather long, but helpful introduction by Martin E. Marty, and is followed by thirteen short (no more than 5-6 pages each) chapters. Chapters of five or six pages (or less)!? Look, this guy was a pastoral, theological, and professorial Ghandalf (or Yoda, or Professor Dumbledore – or whatever you prefer). He didn’t need to mince words or try to fatten up the book with fluff. There were important points to be made in the room full of Theo-Nubes, and Thielicke was intuitive enough after years of teaching them (and watching, listening, dealing with, and enduring them), that he knew just what to say, and how to say it! It doesn’t need to be a long book to do its good work.

The chapter titles are:

Every chapter here is a gem!  I kept highlighting with the Kindle’s yellow highlight feature, but after a while, I just thought to myself, “I could highlight every word. There is not a wasted word in this thing!”

Regarding Thielicke’s appointment to, credentials for, and excellence with the important task of administering the pre-class first year preventive spanking, Martin Mary writes –

A scholarly, intense, concerned man, Thielicke wins the confidence of his hearers. He says some things to young theologians here which few other people could say with such sting, and still such grace and healing. No doubt in the ozoned reaches of Continental theology there are more astute theologians than he. No doubt in the broad pavements of American practical church life there are better administrators. But few are his peers for synthesizing respectable scholarly inquiry and informed practical churchmanship.

And this is really part of the problem isn’t it? When we’re “theologizing” in the seminary classroom, we often don’t think about how to bring those ideas into the world of congregational life in ways that are helpful.

And in the ranks of those who “go to church,” the idea of theological reflection is often sneered at as merely academic and not very spiritual at all. “I just read the word, and God tells me all I need to know!” Not so. Where did you get that Bible you’re reading? How did it come to be translated into your language again?

“Theology,” some believe, “is that dangerous stuff you learn at cemeter– er, seminary.” No.

There is no real option between these two things!

I would not rather have one over and against the other. That is because there is no real biblical choice between uninformed (or sloppy and folksy) spirituality such as is found in many churches, and the pursuit of a primarily academic theological preoccupation that doesn’t touch real life (such as is found in many seminary classrooms, or post-lecture discussions).

As far as the New Testament (which begins with God’s word becoming a human being, cf. Jn. 1:1, 14) is concerned, theology and life must become “one flesh.” Somehow the seminary desk, the pulpit, and the pew all need each other. Thielicke’s little book aims to build a bridge.

As I said, the, entire book is quotable, so you’ll just have to get your own copy, but here are a few ideas that spoke to me.

It is a mistake for anyone who is just in [the stage of theological puberty] to appear before the church as a teacher… I do not tolerate sermons by first-semester young theological students swaddled in their gowns…during this formative period in the life of the theological student, he does not preach.

Unfortunately for our church, I preached before and during my theological training.

Before seminary, I did my best to convey the truth of God’s word to God’s people with the aid of helpful reference tools (though I didn’t really realize how to use them at full capacity).

During my training, I realized that I had not always put things together properly when describing theological concepts, the meaning of words in their original language, or even the primary ideas in biblical texts.  During my training, I often felt like I needed to fix things from the past, or communicate from the pulpit in sophisticated theo-speak to the congregation (though I was prone to that before seminary too. Perhaps it’s part of my personality for better or worse) .

For the most part, our people were very gracious, and many of them were actually grateful. But others told me personally that they felt I was talking (1) above their heads, and (2) down to them.  Speaking of that, Thielike writes:

…theology makes the young theologian vain and so kindles in him something like Gnostic pride. The chief reason for this is that in us men, truth and love are seldom combined.

In other words, there is a difference between loving the sound of one’s own voice when engaged in theological discussion, and loving the people with whom we are communicating the truth. This “unloving” conveyance of “the truth” (uhem) is also often seen in the young theologian’s tendency to be, shall we say, a jackass, when in disagreements with less-trained fellow believers. Many young theologians set out not to help their fellow believers, but to prove that they (we) are more informed, and thus rightly more qualified to speak.

On this note, Thielicke speaks of an encounter where, when talking with a less educated fellow Christian, a young theologian’s…

…purpose was unquestionably to crush the man by the impression of an overpowering erudition to which he could never attain, and thus to reduce him to a feeling of helplessness.

Here truth is employed as a means to personal triumph and at the same time as a means to kill, which is the starkest possible contrast with love.

It produces a few years later that sort of minister who operates not to instruct, but to destroy his church.

But such emerging theologians don’t like to be questioned for either their conclusions or their tactics, according to Thielicke.  However, he warns…

The church has the prior right to question us, even if it does not and cannot understand the details of our work; for we are pursuing our theological study in its very midst as surely as we are members of the church.

And though we are studying to be better pastors ourselves, Thielicke concludes…

The church is our pastor.

I have found this to be true and helpful – not in that someone in the church is going to correct my theology, per se. But rather, that they, by their questions and their rejection of my attitude, are going to help me to think about better ways to say things so that all may understand, and better ways to treat people so that all may feel loved.

Well – there is much more in the book, and this review is getting a bit long, so I encourage you to pick up  your own copy and let Professor, Pastor, Mentor, Fellow Jesus-Following Theologian and Scholar – Helmut Thielike – lead you  in a little exercise!