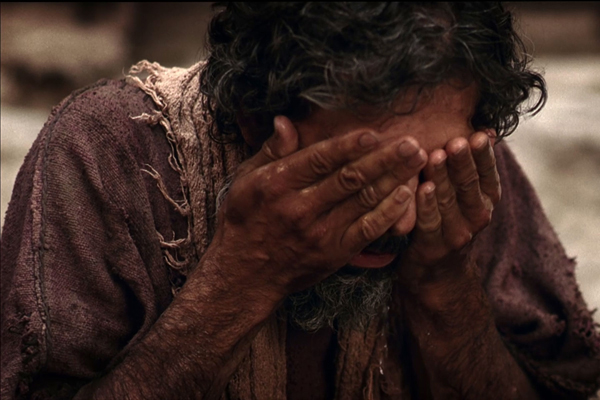 The entire biblical text and the reading below are meant to be read aloud in the company of friends and fellow believers, followed by discussion, confession, and prayer.

A popular American proverb says “There are none so blind as those who will not see.”

John chapter nine is all about blindness and sight, seeing and not seeing. It begins with a blind man who was assumed to be blind because he was a terrible sinner, or at least the child of terrible sinners (cf. Jn. 9:2, 34). After getting spit and dirt rubbed on his eyes by Jesus, followed by a rinse in the pool of Siloam, his eyes were opened, and he was wholly restored. He could see the world around him. He could Jesus as “the Son of Man,”  and so Jesus said, “you have seen…” (cf. Jn. 9:37b).

Conversely, the chapter ends with the tragic account of men who assume their own righteousness. They identify themselves as disciples of Moses and the Law, and they proclaim that they know God speaks through Moses. In the end, though they claim to have sight (and insight), Jesus pronounces them blind.

What is the difference between the two outcomes? Consider at least two keys.

First, in Jn. 9:39 Jesus says — “For judgment I have come…”  This relates to how he answers the question about how the blind man can see, and how the seeing men are actually blind.  But what’s all this talk of Jesus and judgment?  The word here is krima (κρίμα) and it essentially means “to make a determination or final evaluation.”  In the broader sense, it is to make a decision (a judgment) based on the facts. That’s different from “judgmentalism” — so we shouldn’t read that idea into what Jesus is saying about “coming for judgment.”

Judgmentalism is what Jesus’ disciples do to the blind man while he’s blind, and what the Pharisees do to him after he’s healed. They all conclude, based on their own matrix of righteousness and sin, that the man is a sinner. Well, is he a sinner? It’s true that Jesus says in v. 3, “Neither this man nor his parents sinned” – but that is not a reference to their sinless perfection. Rather it’s the answer to whether or not the man’s blindness should be attributed to a payback from God for some secret evil the he or his parents had committed.

The problem with all the “Who is a sinner?” talk is that they don’t conclude that they are sinners just like the blind man! Jesus’ “judgment” isn’t based on dividing the world up into categories of sinners and righteous people. Instead, his judgment is wholly based on how people respond to him. That’s because for Jesus there are not two categories of people if the question is “Who is a sinner?”  There’s only one, and everyone is in it! According to Jn. 9:39, seeing Jesus aright leads to restored vision for sinners who are willing to respond to Jesus on the basis of who he is. In this blind man’s case, it leads to healing of his physical blindness, and ultimately, to his capacity to “see” Jesus as the Son of Man, believe in him, and worship him (cf. Jn. 9:36-38).

On the other hand, rejecting what is obvious about Jesus leads to blindness. In the case of the Pharisees, the result was a pronouncement — a judgment — of Spiritual blindness regardless of what they thought they could see, or the righteousness that they “judged” themselves to have by virtue of their status and their affiliation with the Law of Moses.

In the simplest of terms, when it comes to Jesus — believing is seeing!

So, rather than talk about who is the sinner (or not), Jesus responds with something interesting. It is a second key to understanding the difference between the two outcomes. Jesus says “I am the light of the world” in v. 5. As it was in the chaos of the original creation, so it is here in the in-breaking of the new creation. Here, the chaos of darkness and blindness is overcome with light and vision at Jesus’ touch and command. Thus, the old categories of “blind” and “beggar” no longer apply to the man who lets Jesus heal him, and who does exactly what Jesus commands him to do in the healing process.  Jesus has “handed down his judgment” about this man.  He can see!

But what about those who refuse to see what God is doing through Jesus, and who opt instead for loyalty to systems and ideas (whether worldly or religious), that do not ultimately express God’s restorative work in the world?

In this case, the Pharisees concluded that Jesus was not from God (Jn. 9:16), that the blind man really wasn’t blind to begin with (Jn. 9:18), that anyone who did believe in Jesus, confessing him as Messiah, should be put out of  synagogue fellowship (Jn. 9:22), and that both Jesus and the blind man were obviously sinners from birth (Jn. 9:24, 34).  Conversely, these Pharisees deem themselves all-in”sight”ful (pun intended). They could see who was lying, they knew how everyone was born, they knew who all the sinners were, and they knew that they themselves were righteous. About the only thing they couldn’t see how to do was miraculously heal congenital blindness!  Other than that, they were pretty great in their own eyes.  In a sense, they were running around saying, “We’ll be the judge of who is healed, who is from God, and who is a sinner.”

But Jesus’ words at the end of the chapter push back:

“No! That’s why I’m here. I do the judging, and I do the healing — and if you want to be healed and to truly see things the way they really are, then believing in me is seeing!”

A Confession of Faith and a Prayer for Healing

Lord Jesus Christ – you are the light of the world.

We are poor, miserable, wretched and blind. We have all sinned and fallen short of the glory of God.

Come and speak order into chaos, and light into darkness.

Bring the reality of New Creation into our lives.

Heal us that we may see. And seeing — may we see you Jesus, the Son of Man, and believe in you.

And believing, may we worship you — honoring you as the one who restores the sight of the blind that our eyes may see the salvation of God.

This homily is written for the Sunday reading of John 9:1-14 in the Revised Common Lectionary in LOGOS Bible Software.