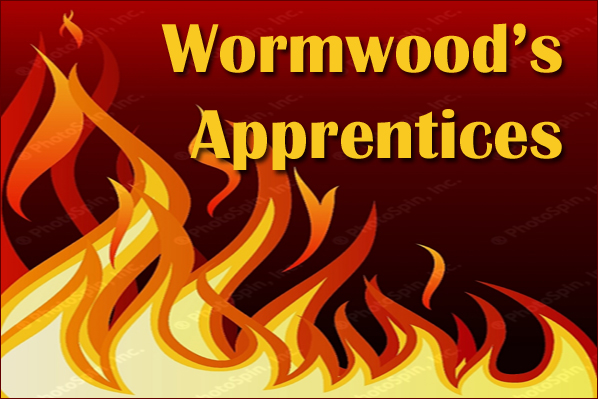 It was a scorching hot day: stifling, energy-draining, punishing — you might even say it was sulphurous. Yet Wormwood barely noticed, as he gazed slowly and malevolently around the circle of eager apprentices, none of whom seemed — in Wormwood’s opinion — to be sufficiently cowed by his presence.

“All right,” he hissed. “Let’s review a bit, shall we, my young apprentices?”

“I have gone to great lengths to serve Our Father Below by attacking the Enemy’s plan of…” He paused momentarily, as if undecided whether or not to voice the terrible curse word, then dared to speak it out loud, slowly and with all the lip-twisting contempt he could muster: “evangelism.”

The three young apprentices immediately and passionately joined Wormwood in the traditional response to “the E-word”, which every demon, young and old, knows is to ritually spit to the left. It sounds like “hyuck, spit”, and woe to the foolish apprentice who mistakenly spits right when everyone else spits left.

Wiping his leathery lips, Wormwood continued: “I have persuaded many of the Enemy’s deluded followers into adopting the same methodology as those they call ‘cults’ — they go door-to-door and annoy people who just want some peace and quiet, hand out unwanted literature in malls and on the streets, and generally make themselves as unappealing as chicken-ripple ice cream.”

He indulged himself in a moment of gloating triumph. “These puny mortals don’t seem capable of recognizing that when they use the same methods as the cults, people think they’re just another cult!” The four of them cackled and snorted with great glee.

Wormwood’s smile abruptly disappeared as if it had never existed. “Now, my young apprentices, what have YOU come up with to put a stop to e-van-gel-ism?” He drew the word out like a bandage being peeled slowly off an open wound.

“Hyuck, spit,” responded the three apprentices. Then the boldest, Rotgut, spoke up.

“Under my tutelage,” he began pompously, not noticing as Wormwood rolled his bloodshot eyes at the arrogance of the young, “the puny mortals have ‘decided’ that they need to make their loathsome little gatherings focused on the needs of those who aren’t with them.”

The other apprentices gave him looks ranging from incredulity to derision. Before the obvious question could be asked, Rotgut quickly continued, “But since none of the little idiots actually knows anybody outside of their own ingrown circles, they waste all their time, energy and money on their meetings. Additionally,” (Wormwood hated when Rotgut repeated used the word “additionally” — Wormwood had never suffered fools gladly) — “additionally, the rank-and-file actually believe that their main job is to try and invite people to big meetings, where the ‘professionals’ can do what they don’t realize that they should be doing… evangelism.”

“Hyuck, spit“, replied the rest gathered around the table. Wormwood said nothing — let the little imp stew for awhile, wondering if he’d gained Wormwood’s approval or not.

After what seemed to be an eternity of his most baleful staring at Rotgut, Wormwood eyed the next apprentice. When he finally spoke, it was a sharp and heated bark that caused all three apprentices to visibly quiver. “WELL?”

“Mine’s even better!” crowed Snivelski, attempting to stifle his quiver. “My puny, insignificant slugs never even think to go out the door to talk to anyone, even to invite them to a meeting!”

In other scenarios, such an announcement would have brought curiosity and envy, but in the slash-and-burn circles of demonica, Snivelski’s triumphant arrogance only earned him looks of malevolent suspicion.

“You see,” he began, speaking as if his listeners were slow of mind and wit, “the trick is to keep them inside their loathsome little buildings, where they’re safely isolated. So, in my grand experiment, I have them convinced that they must invest every available moment of time attending meetings ‘preparing for the harvest’, where they wail, they flail, they sing songs and pray about the harvest. They have created an entire subculture for themselves that is so absorbed in conferences, chasing ‘anointed’ people, meetings, videos, and minutiae that they are self-imprisoned!”

“In a word,” he concluded without even attempting to hide his obvious superiority, “containment.”

Wormwood grudgingly nodded, impressed, and instantly wished he hadn’t. It was always best to keep these impudent young tempters under one’s thumb, and acknowledging even the beginnings of a good idea didn’t help.

His gaze shifted to the third apprentice, Slyster. He’d always liked Slyster; although he was big and strong, he was much more subtle and cunning than his peers — the kind of deviousness that separated the truly effective tempters from the trolls and wanna-be’s.

Sensing that all eyes were on him, Slyster began to speak in his whispery, conspiratorial manner. “Whether inside their building or outside, I have devised a strategy to fool the Enemy’s scrawny peons into voluntarily becoming completely passive non-combatants.”

Glancing around the table with narrowed eyes and a devious look on his otherwise benign face, he clearly saw that they were intrigued and showed it, in spite of themselves.

“My peons can go anywhere, and still be no threat to us or Our Father Below. You see, I’ve convinced them that it’s offensive to speak of the eternal destiny of others, — and that it’s even more of a faux pas to act or speak as if they know the only way to our Enemy Above. They may perform a few do-gooder acts of service here and there, but that is all.”

Slyster could clearly see that he was winning the grudging favor of his fellow apprentices, and even Wormwood looked menacingly deep in thought. “You see, Master Wormwood, it’s one thing to attempt to contain them, or to make them too absorbed in their own ridiculous little subcultures. But just imagine how many souls would be in our grasp, if we convinced our Enemy’s followers that there is nothing so arrogant, so elitist and so offensive as…” he paused to look around the resentful but impressed circle, as he hissed, “evangelism?”

“Hyuck, spit“, everyone agreed, each carefully remembering to aim left.

Wormwood favored each one of them with a glowering look, stroking his chin. At last, he simply said, “A four-pronged attack. Each of these strategies compliments the others. Our Father Below will be pleased.” He allowed them just a brief second to savor the moment, before crashing his fist into the table and thundering, “Now, get out back to work!”

He watched them scamper off in fear, smugly satisfied that they remained cowed and appropriately deferential to him. Still, he mused as he got up to leave, they were showing themselves to be quite clever and innovative. Wormwood would take all the credit when he reported to his Father Below, of course, but deep down, he had to admit: he was impressed.