Exegeting Your Way to Being Left Behind… 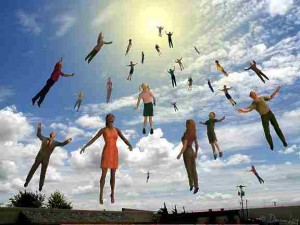 We are all aware of the fact that within North American Evangelicalism, Tim LaHaye and Jerry B. Jenkins are considered two of the most influential authors on eschatology, the study of end times. This is due to the fact that the series that they co-authored, and the connected stories like Left Behind: The Kids, have sold over 75 million copies. Yes, you read that correctly.

The other day, Kenny Burchard wrote a piece called “Getting Left Behind? — According to Matthew & Luke, it’s preferred to being taken!” As with all of Kenny’s posts, there was a lot to think on (by the way, his post helped us have a record number of viewers yesterday!). In the comments section, one of my friends from good old North Central University was pushing back on some of his ideas concerning the texts in question. Being the resident controversial exegetical nutcase, I decided I’d like to weigh in too.

Why? Because I’m not sure what to think on this one!

Here are a few exegetical reflections that I’ve interacted with and reflected on from Matthew 24:38-42, which reads:

“For as in those days before the flood they were eating and drinking, marrying and giving in marriage, until the day when Noah entered the ark, and they were unaware until the flood came and swept them all away, so will be the coming of the Son of Man. Then two men will be in the field; one will be taken and one left. Two women will be grinding at the mill; one will be taken and one left. Therefore, stay awake, for you do not know on what day your Lord is coming.”

Craig Keener notes that “in the context of 24:37-39, “taken” presumably means “taken to judgement”” (The IVP Bible Background Commentary: New Testament, 115). Keener then points us to Jeremiah 6:11 as a possible OT background, which reads:

“Therefore I am full of the wrath of the LORD; I am weary of holding it in. “Pour it out upon the children in the street, and upon the gatherings of young men, also; both husband and wife shall be taken, the elderly and the very aged.” (Jeremiah 6:11)

N.T. Wright suggests, as Kenny pointed out, the same thing when he writes that when Jesus returns,

“… life will go on as normal right up to the last minute. That’s the point of the parallel with the time of Noah. Until the flood came to sweep everything away (is Matthew remembering 7:26–27?), ordinary life was carrying on with nothing unusual… it will divide families and work colleagues down the middle. ‘One will be taken and one left’; this doesn’t mean (as some have suggested) that one person will be ‘taken’ away by God in some kind of supernatural salvation, while the other is ‘left’ to face destruction. If anything, it’s the opposite: when invading forces sweep through a town or village, they will ‘take’ some off to their deaths, and ‘leave’ others untouched.” (Tom Wright, Matthew for Everyone, Part 2: Chapters 16-28, 127)

In addition to Keener and Wright, Craig Blomberg also takes the view that “taken” is “taken to judgement.” If Keener, Wright, and Blomberg lean this way, we need to take this view seriously.

So, at the end of the day, I think either reading makes sense… but I seem to recall that two years ago I came to the conclusion that being “taken” was being taken to judgment. The context of the proceeding verses led me in that direction. However, the context of the verses further back may suggest that being taken could be related to what Jesus spoke of in relation to the angels of v.31! Ahhh!

My inclination is to go with Keener, Wright, and Blomberg on this one, but I think I might have changed my mind due to Wilkins and Morris… or maybe not.

By the way… the pre-tribulational rapture is not taught in the Bible… in case you were wondering.