Getting Left Behind? — According to Matthew & Luke, it’s preferred to being taken! 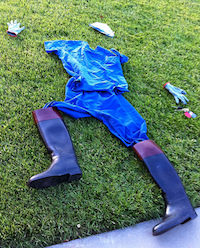 In 1969, Larry Norman wrote his song, “I wish we’d all been ready” based on the popularized rapture schema of pre-trib (and mid trib) premillennial eschatology.  The chorus says…

In 1972, the movie “A Thief in the Night” (and three other movies that followed it) scared the hell out of millions of people (including lots of lukewarm Christians), by presenting them with scenes of being left behind after “the rapture” to face the perils of a world run by “the Anti-Christ” and his evil system during the future “great tribulation.”

More recently, the popular fiction series of  Left Behind books and films continue to reinforce the idea that any day now all true Christians will be removed from planet earth in the rapture, and taken off to a great heavenly feast up in the sky (lasting either seven years or 3.5 years depending on your preferred theological brand and stomach for enduring pain and persecution) with Jesus, while he simultaneously unleashes his vehement wrath upon the earth and all those who have been left behind to suffer.

The idea of the rapture is practically stock-in-trade with millions of primarily north American evangelicals who see the world as an increasingly evil place from which they long to escape into heaven’s bliss before it reaches the apex of evil. The quest to identify the Anti-Christ (was it Hitler, no, Reagan, no, the Pope, no, Barack Obama well — the jury’s still out, no, aha! maybe a Muslim…??), and to properly read the signs of the times (with corresponding charts noting the dates of corresponding world events) is big business!

Proponents of this eschatological system find the fearful imagery of being left behind in the rapture and suffering in the great tribulation primarily in the gospels of Luke and Matthew.

36 But concerning that day and hour no one knows, not even the angels of heaven, nor the Son, but the Father only. 37 For as were the days of Noah, so will be the coming of the Son of Man. 38 For as in those days before the flood they were eating and drinking, marrying and giving in marriage, until the day when Noah entered the ark, 39 and they were unaware until the flood came and swept them all away, so will be the coming of the Son of Man. 40 Then two men will be in the field; one will be taken and one left. 41 Two women will be grinding at the mill; one will be taken and one left. 42 Therefore, stay awake, for you do not know on what day your Lord is coming. 43 But know this, that if the master of the house had known in what part of the night the thief was coming, he would have stayed awake and would not have let his house be broken into. 44 Therefore you also must be ready, for the Son of Man is coming at an hour you do not expect.

26 Just as it was in the days of Noah, so will it be in the days of the Son of Man. 27 They were eating and drinking and marrying and being given in marriage, until the day when Noah entered the ark, and the flood came and destroyed them all. 28 Likewise, just as it was in the days of Lot—they were eating and drinking, buying and selling, planting and building, 29 but on the day when Lot went out from Sodom, fire and sulfur rained from heaven and destroyed them all—30 so will it be on the day when the Son of Man is revealed. 31 On that day, let the one who is on the housetop, with his goods in the house, not come down to take them away, and likewise let the one who is in the field not turn back. 32 Remember Lot’s wife. 33 Whoever seeks to preserve his life will lose it, but whoever loses his life will keep it. 34 I tell you, in that night there will be two in one bed. One will be taken and the other left. 35 There will be two women grinding together. One will be taken and the other left.” 37 And they said to him, “Where, Lord?” He said to them, “Where the corpse is, there the vultures will gather.”

Notice the flow of dialogue after Jesus mentions people being “taken” in vv. 34-35. “One will be taken…” — and they said to him, “Where Lord?” and he said to them… “Where the corpse is…”

This is so important.  Jesus did not say that they would be snatched out of their beds in the middle of the night and taken to up to a heavenly banquet in the sky. Nope. Just the opposite.  Whoever is taken in these events is not going to enjoy what happens next.  Being left behind, in both texts is preferable to being taken!

N.T. Wright (thankfully) keeps these texts in their contexts, and emphasizes the peril of midnight invasion by enemies and thieves in the night who take people out of their beds and away from their work, tearing families apart as some watch their loved ones “taken” in judgment while they are “left behind.”  He writes in Jesus and the Victory of God…

At that time there would be division between families and colleagues: one would be taken, another left. It should be noted that being ‘taken’ in this context means being taken in judgment. There is no hint, here, of a ‘rapture’, a sudden ‘supernatural’ event which would remove individuals from terra firma. Such an idea would look as odd, in these synoptic passages, as a Cadillac in a camel-train. It is a matter, rather, of secret police coming in the night, or of enemies sweeping through a village or city and seizing all they can. If the disciples were to escape, if they were to be ‘left’, it would be by the skin of their teeth [1].

*update: I expand on what I think these two texts are actually referring to below in the comments section to a guy named Joe O’Brien. Scroll down and read those comments after you’re finished with this post.

Here’s what it says…

15 According to the Lord’s word, we tell you that we who are still alive, who are left until the coming of the Lord, will certainly not precede those who have fallen asleep. 16 For the Lord himself will come down from heaven, with a loud command, with the voice of the archangel and with the trumpet call of God, and the dead in Christ will rise first. 17 After that, we who are still alive and are left will be caught up together with them in the clouds to meet the Lord in the air. And so we will be with the Lord forever.

What are the elements in this text? I propose —

1. The coming of the Lord…
2. In what is pictured as a descent from heaven…
3. Which is preceded by a loud attention-getting command and a trumpet blast…
4. To which both living and dead respond by getting up from where they are — first the dead, then the living…
5. Who rush out to meet the Lord, enraptured with joy at his home-coming…
6. Who live with him forever.

When the King comes home from battle victory!

This is not imagery for a secret snatching away in the middle of the night. There’s nothing secret about it. It’s loud! There is shouting. There are trumpet blasts. There are dead people getting up, and living people getting up. There is no quiet disappearance. It’s all very loud and very visible. It’s imagery of a King returning home from victorious battle, to which all of the people who love him respond with joyful celebration — going out to meet him at the edge of the city, and marching back into the city with him in royal procession!  There is an image for this very thing in 1 Samuel 18:5-7.

5 Whatever mission Saul sent him on, David was so successful that Saul gave him a high rank in the army. This pleased all the troops, and Saul’s officers as well. 6 When the men were returning home after David had killed the Philistine, the women came out from all the towns of Israel to meet King Saul with singing and dancing, with joyful songs and with timbrels and lyres. 7 As they danced, they sang:“Saul has slain his thousands, and David his tens of thousands.”

This seems to be the exact imagery of 1 Thessalonians 4, and it would make a whole lot more sense to people living in Paul’s world to understand this text as the image of a King’s home-coming celebration.  What is “rapture?”  It is rapturous celebration of victory.  It is being “caught up” in the joy of the King’s return, and rushing out to meet him so that you can celebrate his victory. To suggest that the first Christians would have interpreted it as a promise to be removed from the earth before judgment makes no sense.  No, they were very familiar with the imagery of rapturous celebration following a King’s victorious home-coming after a successful war campaign.  They would hear the trumpet announcing his presence at the border of the city, and they would all leave what they were doing and go out to where the King was stationed, fall in line behind him, and march into the city behind him — right up to the courts where the King would dismount his animal and ascend to his throne — the spoils of his victory being laid at his footstool.

Again, N.T. Wright says that this is a comforting image of hope…

for people like the Thessalonians who were suffering persecution and awaiting God’s vindication. And their ‘meeting’ with the Lord doesn’t mean they will then be staying in mid-air with him. They are like Roman citizens in a colony, going out to meet the emperor when he pays them a state visit, and then accompanying him back to the city itself [2].

The Son will come to those who’re left behind

As far as Matthew and Luke are concerned, being taken away in judgment (to “where the corpse is…”) is a bad thing.  Being left behind much more preferable. After all, the King is coming Home to the world that belongs to Him, and this is where I want to be when He comes.