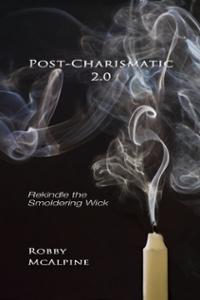 received a review-copy of Post-Charismatic 2.0 last December and finally finished reading it in February.  I have to say — it was such a page-turner for me, and I often felt that McApline was reading my mind, then transcribing my own thoughts as he was writing the book.  It resonates!

Welcome to a book for anyone who has seen (and been negatively impacted) by what Robby McAlpine calls the “twisted teachings and spiritual abuses that exist in the charismatic movement,” but who also believes that the gifts of the Holy Spirit are relevant for today! If that’s you, you’re what McAlpine calls a Post-Charismatic.

In the opening chapter, McAlpine invites the reader to sit in on an imaginary recovery-group meeting, but the twist is that everyone in the room is a recovering charismatic.  Yes, welcome to Charismatics Anonymous!

You might be in a charismatic church… if you finally figured out that ‘touch not the Lord’s anointed’ really means SHUT UP!

Sorry, but you’ll have to get the book if you want the rest of the list. It’s spot-on! I personally liked McAlpine’s literary use of a Charismatics Anonymous meeting to set up the book because it enabled him to accomplish two important things:

1. To identify and describe how the relational, doctrinal, and practical abuses that happen in so many charismatic churches really devastate people on multiple levels.

2. To contend for the biblically-rooted belief that we can still embrace and enjoy the gifts of God’s Spirit today without embracing all of the baggage that has come with them.

We don’t need to throw out the baby with the bath water!  But dang… that bath water! Wow!

The book is more than a critique of the Charismatic movement.  It’s an easy-to-read history of the movement, tracing several primary streams (and the movers and shakers within them) as they emerged over time. There’s a good chunk of stuff on Wesleyan/Holiness roots of the Pentecostal movement in Chapter two, along with a great summary of the emergence of the North American Pentecostal movement (Azusa Street, Charles Parham, etc.) and the corresponding doctrinal and practical emphases.  This chapter actually provides helpful insight into the eventual birth of the Charismatic movement with its roots in Pentecostalism. For anyone who wants to answer the question, “What’s the difference between a Charismatic and a Pentecostal?” this chapter will be a great help.

Chapter three is a summary of the history, doctrines, and personalities behind the Latter Rain Movement.  On p. 56, McAlpine writes:

Many people who have been influenced by the Latter Rain [movement] would be shocked to learn the whole picture.

I can say that until reading this section, I had not really considered how my own understanding of Pentecostal/Charismatic issues has been shaped by the Latter Rain ideas.  The beliefs that we are the “chosen generation,” and that we can “hasten the coming of the Lord Jesus” through evangelistic zeal and success, the pastime of disparaging denominations (which is pretty typical in the average independent Charismatic church), and the excruciating tendency to formulate doctrine and praxis on the basis of prophetic words, are all hallmarks of churches that have been shaped by the Latter Rain movement.

Pages 90-91 (for those in recovery) provide a sobering list of the painful fallout experienced by people who handed the whole direction of their lives over to the “prophets” who told them exactly how their lives were going to go (e.g., they’d all be famous Christian “stars” with amazing and powerful ministries that would change the world). The chapter ends with a helpful review of the New Apostolic Reformation, and a great section titled, “So Now What?” that puts the gifts of the Holy Spirit into a mature, helpful, and edifying perspective.  I thought this was great — especially for the person who has been burned by “prophetic” words who might, as a coping mechanism, be tempted to write off the gift of prophecy altogether (can I get a witness?).

I can’t pass up referencing McAlpine’s definition of a “functional cessationist” on p. 117 because I think it gets to the heart of this book.  He writes:

To be a functional cessationist is to give lip service to the reality of spiritual gifts, yet by either neglect or deliberate choice, never use them.

My suspicion is that there are many functional cessationist pastors and church members running around in Charismatic and Pentecostal churches. My guess (and I think I’m right) is that many of them would identify (using McAlpines nomenclature) as Post-Charismatics if they knew what it was. McAlpine gives us the language we need to move forward.

Post-Charismatics simply cannot bring themselves to conclude that the gifts of the Holy Spirit are irrelevant, but their experience with people who were supposedly using the gifts, or ostensibly functioning under “thuh anointin’ of the holay ghost-tuh” (my poke at pentecostal lingo) puts them between a rock and a hard place. There is such dissonance between what they see in Scripture, and what they’ve seen in real life that they resolve to keep the whole package at a safe distance.  Post-Charismatics typically won’t go to churches that teach against the gifts (if they still go to church at all), but they won’t practice them either. McAlpine’s book offers a way forward.

Thank God for chapter four — The Word of Faith. Again, this chapter traces the history, teaching (and teachers) and impact of this harmful theological system.  It is essential reading for any Pentecostal or Charismatic pastor who finds that there are “word-of-faithers” (my own terminology) in their congregation (which is typically every Pentecostal/Charismatic church!!).

McAlpine does a great job of identifying the hermeneutic of Word-of-Faith teaching as being rooted in seeing everything through a Legal matrix.  Quoting Kenneth Copeland, this interpretive lens comes to Scripture insisting that Christians must…

Offering a critique of this position, McAlpine concludes…

This places Christians into the position of holding God accountable for promises in His word — even promises which He may not have actually made (p. 135).

There is not enough space in this post to discuss how this version of faith has wrecked peoples lives, and led to their financial ruin and possibly even the demise of their health (if not the deaths of many Christians), because they were told that if they could just believe God strong enough (and never doubt! never! not even for a second!), He would be obligated to give them what they were claiming (often in the form of wealth and health).

In my own experience, I knew a precious woman who died of cancer because a word-of-faith teacher told her to flush her meds, skip the doctors appointments, and just “take the word of God like medicine” (using texts like Prov. 4:20-22 as a proof-text).  There are zillions of stories like this floating around because the Word of Faith doctrine (and the people who believe it) always go to Charismatic or Pentecostal churches (because they are not cessationists, so that’s where they land).

Every Pentecostal and Charismatic pastor should read chapter four!  McAlpine’s discussion of faith on pp. 160-173 can (and probably should) be developed into a teaching series by every pastor reading the book in order to…

(1) Publicly and carefully repudiate the word-faith version of faith, and

(2) help Charismatics and Pentecostals to think (and live) biblically about the theme of faith.

Chapter five deals with the issue of Authority and Submission in important ways.  McAlpine quotes J. Lee Grady who writes:

The spiritual abuse perpetuated  by authoritarian leaders in the Church has resulted in thousands upon thousands of wounded believers; people who can no longer trust the church to be a sanctuary and who no longer expect pastors to be healers (p. 180).

The impact of the Shepherding Movement and the related understandings of discipleship within the Charismatic churches who embraced them have done untold damage to many followers of Jesus.  McAlpine traces the historical and theological roots of these ideas back to their sources, but then offers a way to think about authority and submission by taking a closer look at Hebrews 13:17 (the text often used by proponents of authoritarian leadership in Pentecostal/Charismatic churches). Anyone who is experiencing spiritual abuse by authoritarian leaders will need these pages in order to shake free!

Chapter six (the final chapter ) is called After the Meeting.  McAlpine returns again to his fictional narrative of people who are leaving the Charimatics Anonymous meeting, and find themselves in a malt shop where they continue to process the things they talked about in the meeting.  The dialogue around the table in McAlpine’s story reminded me of a hundred similar conversations I’ve had over the years.

There’s some great stuff in this chapter about the terminology of continuationists and a short study of Spiritual gifts discussed in 1 Cor. 12-14 that is incredibly helpful for those who want ALL that the Bible says is available, but who don’t want the package that it often comes wrapped in.

I first started this book when the whole #strangefire controversy was in full swing, and I remember thinking, “this book is the anti-strangefire.”  McAlpine offers an honest critique of the imbalances of the Charismatic movements, but he never uses those imbalances as a spear to impale the notion of the continuation of the gifts of the Holy Spirit. No! He loves the baby.  But he agrees that the bath water is unfit for bathing!  I found the writing style to be incredibly honest, but incredibly gracious and emotionally mature (something I’m still working on when I talk about my own frustrations with my experience in the Charismatic movement).

In short, you should buy and read this book. If you’re currently in a Pentecostal/Charismatic church, it will help you to interpret many of your experiences.  If you’re a Post-Charismatic, it will help you with your recovery.  If you’re a skeptical cessationist who loves books like Charismatic Chaos and Strange Fire, then this book may actually help you to see that there are continuationists who repudiate the imbalances found among Pentecostals and Charismatics — but who will never repudiate the availability of the gifts of the Spirit to the church in the present age. Each chapter contains a great blend of real-life-stories, history, theological reflection, and sections that help Post-Charismatics think about how they can (using McAlpine’s language) “rekindle the smoldering wick” of their faith and their passion to see God do great and powerful things.

If you want to pick up your own copy of Post-Charismatic 2.0, CLICK HERE

Finally, chime in below. Have you read this book? Are you a post-charismatic?