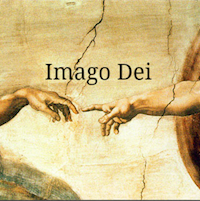 Much has been made of the important theological idea of the Imago Dei (Latin for “image of God”).

There has been plenty of work discussing it in…

Psychological terms (e.g., the capacity to think, to reason, and to be rational and even to be self-conscious), in…

Relational terms (e.g., the capacity to love, hate, relate, and “feel” for others in profoundly relational ways), in…

Spiritual terms (e.g., the capacity to contemplate the existence of God, and to connect with God in prayer — and to perceive Spiritual  or metaphysical realities), in…

Moral terms (e.g., to perceive and express the difference between good and evil, and to respond to both of these by punishing evil and celebrating/advocating for good), and…

In terms of Personhood (e.g., the possession of a mind, will, and emotions that are unique to each individual enabling self-expression, etc.).

But these ideas come at the theological question/discussion of “What is Imago Dei?” in terms that seem more philosophical than theological to me (though I don’t think they are inaccurate or without value). What about coming at the question more, say, exegetically (especially in Genesis 1 & 2)?  I think there is another aspect of the Imago Dei that is worth much more consideration and dialogue, and even helps to understand some of God’s original intent for the human race, as well as some Christological issues more clearly. Think of Imago Dei in Functional terms.  That is, consider how God speaks about the function of humanity within the creation just after he says, “Let us make humanity in our image and after our likeness” in Gen. 1:26a:

Yes, just after God’s creation of humanity in His own image, he says…

In other words, it is my sense that these ideas illustrate what God means by giving the human race his “image.”  Functionally speaking, they are to represent God’s rule over the creation. They are to function as his co-regents in the creation. Of course, as the story goes, they failed in this vocation — though the theme repeats itself elsewhere with other people in Scripture (cf. Gen. 9:1-3).  It seems that, on a functional level, God’s original intent is to have the created order superintended by an image-bearing vice-regent who rules wholly on God’s terms.  Perhaps this gives insight into Jesus’ own self-perception in his “preamble” to the Great Commission in Matthew 28:18 —

And could this also be a central idea in the New Testament theology of Imago Dei with reference to Jesus in Col. 1:15 and Heb. 1:3?  In both of these texts, there is imagery of ruling and reigning just after references to Jesus being God’s image in the world (e.g., “first born over all creation” in Colossians, and “sat down at the right hand of the majesty” in Hebrews).  In  other words, isn’t there much to be made of the functional aspect of Imago Dei? Doesn’t it seem highly reasonable — even central — just based on the way the texts related to this theme unfold, to understand “God’s image in humans” to refer to our function in this world? And doesn’t it seem reasonable  in terms of our Christology to think of Imago Dei as God’s way of saying who gets to rule the world?

What does this say about how we can better help each other understand how God’s image is being “re-paired” in humanity through Jesus (yes, I meant to hyphenate that)?

I would absolutely love to dialogue with you more about this aspect of Imago Dei in the comments, and see if you think (as I do) that is one of the most helpful ways of explaining this amazing biblical idea that humans are made in God’s image.