No, expository preaching isn’t “Biblical,” but learn to do it anyway! 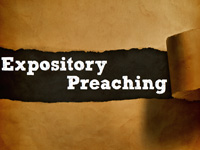 Twenty-two years ago I made up my mind. I was going to be an expository preacher! The preacher I listened to the most during that season of my life was an expository preacher. I admired him, I always felt like I learned from him,  and he always talked about how his way of preaching was the best way to preach. Convenient!

So, like a good disciple I ordered a brand-new copy of his seminary text-book championing expository preaching and went to work on it. From that time forward I always tried to preach every sermon as an exposition of a biblical text. Though I didn’t go to seminary until many years after I started teaching the bible, I did my best with the challenges of trying to preach expositionally without having studied biblical languages (a big no-no in the book, and to be honest, now I understand why — but that’s a topic for another post).

During the twelve years that I was a senior pastor in our last church, I almost always preached expository messages (at least I tried. Expository preaching is a skill that one has to hone over time).  After about twenty years of full-time pastoral work, and twelve years as a teaching pastor who taught verse-by-verse through several books of the Bible, I have two conclusions.

1. Expository preaching is not, and cannot in any way be proven to be the most “biblical” way to preach. It would be better to stop saying “this is the most biblical way to preach” (since that is not true), and to say something else instead.

2. Every pastor who teaches the Bible regularly should work hard at getting better at expository preaching, and do it as often as you can (always, if possible). Why? Because though it’s not a teaching-style that is commanded in the Bible, it is the best way to help people understand what the whole Bible actually teaches — especially if you get the honor of preaching to one congregation over the course of months or years.

Let me pause to define and briefly explain expository preaching.

In the simplest of terms, expository preaching is reading a passage of the bible aloud to the congregation, then explaining what the the passage means (in all of its literary, historical, occasional, theological, cultural contexts), then helping the listeners understand how the ancient text applies to their own present-day circumstances, helping them to love and live the truth that they have learned.

A broader understanding of expository preaching is to preach verse-by-verse through entire texts of the Bible so that your congregation (or class, or whatever) can actually understand the Bible. Now that you have a basic definition, let me go back to my original two points.

The first point was — there is no way anyone can say that expository preaching is the most “biblical” way to preach. Why is this? Because the Bible doesn’t say anywhere to preach expository sermons. It doesn’t even say to “preach sermons” for that matter. It does say to preach the word. But once you start looking at various sermons in the Bible, it’s tough to find anything like an expository sermon. We don’t have any examples of Expository sermons from Jesus. None of the New Testament letters are expository sermons. It is possible that the Gospel of Mark is written sermonically, but if that’s true it certainly doesn’t fit the mold of an exposition of another text of Scripture. Hebrews is also understood by many scholars to be a sermonic epistle, but it is based on several old testament texts. None of the Old Testament prophets were expositors, and we’re not really sure how the New Testament leaders were teaching, though we do know that the early believers devoted themselves to their teaching. Nehemiah 8:1-11 contains probably the nearest thing to expository teaching in the Bible, but that’s not a pattern that can be seen repeated anywhere else, and it certainly isn’t anything the Bible commands preachers to do. But in the New Testament, Paul exhorted Timothy to “preach the word” (cf. 2 Tim. 4:2).

That imperative command to “preach the word” brings me to my second point. This is not a command to preach my sermons and to ensure that I add adequate Bible verses to reinforce my own conclusions. No. Teaching pastors should learn to do expository preaching, and do it as often as possible. Not because the Bible says, “Preach expository sermons,” but because in order to really teach the Bible carefully and accurately, expository preaching/teaching is simply the best way. Topical preaching can be very helpful, and I am not here attacking it, but topical preaching does not produce Christians or congregations who understand the whole counsel of God. Rather, it gives them a loose and ever-growing list of Bible themes complete with four, five, six, eight, or twenty verses from all over the Bible to reinforce the main idea in the topical preacher’s message. That is simply not how the Bible is written, so my conviction is that it’s best not to teach it that way.

The Bible is written as a collection of books with a variety of literary genres. Each book of the Bible should be taught as a unit, and each unit should be put into the larger context of the entire Bible so that your congregation understands what the Bible is teaching. No passage of the Bible is just sitting there like an isolated little nugget floating around between the leather-bound cover without an actual context.  If you think you’re going to be a teaching-pastor for a long time, then just do it. Just make a commitment to learn how to be an expositor. Choose a book of the Bible for your congregation to study. Invest yourself in learning that book, as well as how it fits in with the larger story of Scripture, then begin — Sunday by Sunday, reading it aloud, verse by verse, explaining it as you go, helping people to understand it, helping them to think of ways to apply it, and living it yourself in front of them.  By the way, that’s the heart of Ezra 7:10.

Preacher, even though the Bible doesn’t command you to preach expository sermons, and even though no one can say that expository preaching is “biblical,” you should do it anyway so that both you and  your congregation can grow and become deeply rooted in the scriptures.