Apostle of the Last Days, by C. Marvin Pate 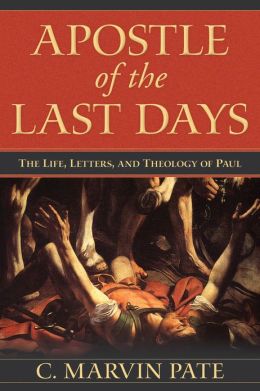 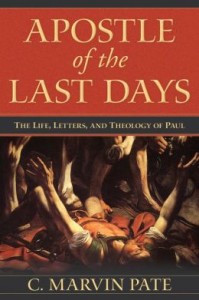 Pauline studies has been arguably one of the main focuses of scholarly inquiry for hundreds of years, especially after the Enlightenment. In some circles, it is far and away more important than even Jesus studies (yikes!). Yet in other circles, the Pauline corpus is all but ignored, as it is “too doctrinal.” There is, of course, a healthy middle ground, but that’s for another topic on another day.

For my part, I enjoy reading on the Apostle Paul. That makes me a fan of people like Gordon D. Fee, N. T. Wright, Thomas Schreiner, etc. I appreciate the way in which scholars seek to “put together” a pauline theology. Joining the ranks of these scholars is C. Marvin Pate with his recent publication of Apostle of the Last Days: the Life, Letters, and Theology of Paul. Of course, Pate is not new to pauline studies, as he has published books and articles on the subject numerous times. What we do have now, however, is a more comprehensive summary of his previous academic studies on Paul.

Pate introduces the book by writing, “next to Jesus Christ, the apostle Paul is the most important figure in the Christian faith.” Now one might want to immediately challenge this statement and point to the influence of people like Abraham, Moses, David, John, and Peter, but that’s simply a difference of opinion. Pate’s opening statement reveals his deep value for Paul and his place in the history of Christianity. This opening line leads into a brief summary of Paul’s cultural influences and explains a lot of historical background.

What’s most intriguing in Apostle of the Last Days is  that Pate finds Paul’s theology flowing out of inaugurated eschatology, the “now and not yet.” This does not mean that Pate focuses exclusively upon eschatology in the traditional sense; he ties inaugurated eschatology into how Paul views Christology, Pneumatology, Anthropology, Soteriology, etc. (there is an apparent typo in the Introduction as Pate’s summary of Paul’s perspectives on the seven traditional systematic categories appears twice).

Chapter 1 seeks to establish Paul as “an Apocalyptic Seer” because Pate views Paul’s conversion and call to be “eschatologically driven.” He writes that “the four components comprising Paul’s message were apocalyptic in nature and were rooted in his conversion/call” and then provides the following:

Throughout the course of Pate’s Apostle of the Last Days, inaugurated eschatology is a prominent feature, if not the controlling feature of his pauline study. The majority of the rest of the book is simply theological observations of the Pauline corpus, which Pate believes to include thirteen letters (the early epistles, the major epistles, the prison epistles, and the alleged “pastoral” epistles). In addition to his theological observations, there is plenty to get those who love exegesis excited.

Another interesting focus that Pate provides is contrasting Paul’s inaugurated eschatology over and against the other competing eschatologies of his day found in, for example the realized eschatology of Hellenistic religion, the Roman Imperial cult, and the different types of Judaizers (merkabah and non-merkabah). Having spent little time studying several of these competing eschatologies, Pate’s thoughts are helpful in better understanding Paul’s theology.

Apostle of the Last Days is a great addition to pauline studies. Pate’s progressive dispensational leanings are observable in several locations, but this is not to be viewed as a strength or a weakness as that depends entirely upon one’s view of PD. But it certainly does influence his understanding of Paul (or Paul’s teaching influences him to embrace that, depending upon your perspective!). As one who does not hold to PD, I was actually pleased by how he handled the issue of Israel and whether or not there will be a future conversion as discussed in Romans 11:1-36. Pate’s view, which I encourage you to read when you pick up a copy of this book, is very helpful and stimulating, though it’s simple and does not dive into all of the complexities of the differing approaches. In other words, I like it.

In my opinion, I’d like to have seen a bit more emphasis on inaugurated eschatology being inaugurated in the life of Jesus, not just his death and resurrection. I know this is somewhat difficult to do being that pauline theology tends to emphasize the latter, but Jesus clearly indicates the former in Matt. 12:28. This is, obviously, connected to the subject of the Kingdom of God and I think Pate could have spent more energy (and space!) on the subject. This is nit picking, of course, but I wonder if he’s relying too much on the PD approaches that folks like Saucy have provided rather than a thoroughly robust and comprehensive look at the issues. Considering that he acknowledges that Luke’s Acts is helpful in understanding Paul’s life, ministry, and theology, it would seem that a more detailed focus on the kingdom of God would be found, especially since we’re told that Paul preached that very subject (cf. Acts 19:8; 28:23, 31).

Of course, this is just a few of the thoughts that were in the back of my mind as I read Apostle of the Last Days. Overall I was very much impressed by what Pate wrote and found it quite helpful. Pastors and scholars alike will find this helpful!