Technically this was finished on Wednesday (10:41 pm)! So I can still welcome you to  Wednesday’s With Barth!  #winning!

Barth says… “In identifying with divinity a humanly conceived idea, one, that is, already belonging to man prior to, or even apart from, any revelation, it may set store by the man Jesus, but it may also do without Him. It may strip Him of His mantle of divinity, just as it cast it over Him”

Docetism is an early rejected teaching of Christ. To the Docetist Christ  “seemed” or “appeared” to be human but was not actually human. The divine Christ part of the man had vacated Jesus during his suffering, death and resurrection. Docetism is the product of importing Gnostic beliefs into Christianity. The selected quote from this week’s reading has much to teach us about projecting ourselves into our Christology. For the Gnostic all things spiritual represented good while all things material represented bad or evil. So for many Christians trying to reconcile the tension of the Christ event with their Gnostic reasoning the construct of Docetism seemed practical. 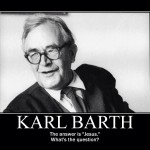 D.F. Wright says… “The Docetists of primitive Christianity were united in being unable to affirm inseparable lifelong identity between the heavenly or divine One (often distinguished as Christ) and the human Jesus. But they differed widely in their christological accounts. Some believed that Jesus was born and lived like other human beings but was indwelt by the Christ only temporarily, from his baptism to the eve of the crucifixion, thus avoiding implicating the divine power or agent in the processes of human birth and death… Others at the opposite end of the docetic spectrum regarded the figure of the Gospels literally as ghostlike, a phantom, an optical illusion… Underlying all docetic christologies in the early centuries was a conviction, whether of philosophical or theological inspiration, of the impropriety or even impossibility of real incarnation of divinity in human matter. Some flavor of dualism of spirit and flesh was nearly always operative, but the precise nuance of that dualism, varying from gut-level revulsion against the very thought of God in the womb or the tomb to high-minded notions of divine transcendence, must be observed in each case.”

John 1:14 The Word became flesh and blood, and moved into the neighborhood. We saw the glory with our own eyes, the one-of-a-kind glory, like Father, like Son, Generous inside and out, true from start to finish (The Message).

John is not trying to answer the “how” question concerning Jesus Christ but more like the “who” and the “what”.  I think we “strip Him of His mantle of divinity” or “cast it over Him” when we remove the space of mystery from the event of Jesus (100%) Christ (100%). When we seek to use man made tools to reconcile the mystery that is Godliness we might comfort ourselves in superficial ways but in the end we are rendered blind by our own man made lenses. Is it possible that we do this for example with Genesis when we read the book through the lens of modern fabricated creation/evolution tensions and exchange the “who” question of Genesis 1 & 2 for the contemporary imposing “how” question? That same imposing “how” even finds its way somehow into our soteriology by making the central question of the Gospel “how one is saved by Jesus Christ?” or “How is the Christ, Jesus?” rather than “who is the one who saves us through Jesus Christ?” or “Who is Jesus?” to which the Bible emphatically exclaims The Christ! How is Jesus the Christ and The Christ… Jesus? Well now that’s a mystery (Deuteronomy 29:29).

I want to make you aware of some other good Barth posts from this week as well. Thanks guys!

I also want to show you how to display the page numbers on the Logos Bible Software edition of Barth’s Church Dogmatics. It is very helpful. 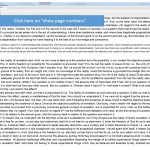 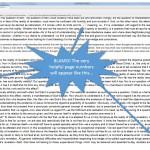