In 2013 I think it’s safe to say that I read over 200 books. The fact that I just typed that actually freaks me out a little bit because that means that I averaged reading about 3.85 books a week. Apparently this confirms what everyone suspects: I’m a nerd.

Oh well. Ha ha! Though not all of these were published in 2013, here are my favorite books that I read this year:

#10: Embracing Shared Ministry by Joseph H. Hellerman (review here). I won’t reiterate what I wrote in the review, but I will say that Hellerman’s book has caused me to think a lot about team ministry, servanthood, and leadership. In fact, I find myself often thinking and rethinking about ideas I encountered in Embracing Shared Ministry. There’s much to be considered and I believe pastors would do well to spend some time in this book. One of the fascinating ideas that Hellerman interacts with is related to power and authority in a christological ecclesiology (my summary of his perspective). In other words, what does Jesus have to do with the way in which we look at leadership and power. Contra what we often find in churches that tend to confuse ecclesiology with enterprise, Hellerman challenges readers to be as radical as Jesus and the apostles (especially Paul in Philippi!). Loved it.

#9: To the Ends of the Earth: Pentecostalism and the Transformation of World Christianity by Allan Anderson. This was actually one of my textbooks for a recent class that I took and I’m very glad I read it. I believe I have a much better understanding of the global aspect of (p)entecostalism as opposed to the more narrow (P)entecostalism that I have either been a part of or experienced in my younger life. With the recent surge of pejorative polemics coming from a small group of evangelicals against the entire global Charismatic Movement (which I wrote about here, here, and here), I’d like to remind everyone that it’s important to understand the beliefs and practices of people before one goes about throwing a conference to slander them. Anderson’s work here (and in his An Introduction to Pentecostalism) is a good start. For my part, though I do not self-identify as a (P)entecostal and take issue with the classic pentecostal doctrines of subsequence and initial evidence, I believe I have a much better understanding of the theological concerns that global (including American!) (p)entecostals have.

#8: Recovering Classic Evangelicalism: Applying the Wisdom and Vision of Carl F. H. Henry by Gregory Alan Thornbury. I’m currently spending a lot of time thinking about Evangelicalism, the movement/ethos that I self-identify with. Anyone who is interested in Evangelicalism, especially the American variety, has to consider the influence of Henry. Thornbury does a wonderful job of unpacking Henry’s ideas. This would serve many people who are thinking through Evangelicalism and why epistemology, theology, inerrancy, and culture matters. Not to mention why, according to Henry, Evangelicalism matters. What strikes me as most important is how Henry did significant work towards defining and arguing for inerrancy, he did not make it the litmus test for salvation. Given the current debates happening in Evangelicalism, I think this is important. One can hold to a strong view of the authority of Scripture and not demonize everyone who doesn’t agree with every sub-point of one’s doctrine.

#7: Ask, Thank, Tell: Improving Stewardship Ministry in Your Congregation by Charles R. Lane. I think my friend Jason, a Vineyard pastor, told me about this one. Our church’s finances have struggled over the last year and I know that part of this is because I have not always been great at talking about money. My reason for being hesitant is because the fact of the matter is that I think a lot of pastors/church leaders do not do justice to what Scripture actually teaches and employ some pretty manipulative tactics in trying to raise money. I want to both do justice to Scripture and avoid being manipulative. Lane’s book, Ask, Thank, Tell, is excellent help. There are many practical ideas to help pastors think about giving through the lens of discipleship and missions (Another decent book is Nelson Searcy’s Maximize: How to Develop Extravagant Givers in Your Church, though it’s a bit more pragmatically driven than I’d like and needs to be processed before blindly applied; that being said, it’s got some good stuff to consider).

#6: Why We Belong: Evangelical Unity and Denominational Diversity edited by Chute, Morgan, and Peterson (review here). I loved this book. The fact that Why We Belong includes authors with a good amount of ecclesiological diversity yet a lot of evangelical unity, and it is quite interesting to read how this is possible. Though there are differences between the authors represented (Anglican, Baptist, Methodist, Pentecostal, Lutheran, Presbyterian), there’s clearly a fair amount in common. For my part, Why We Belong confirmed that it’s okay to have diversity within a movement that has unity.

#5: Sojourners and Strangers: The Doctrine of the Church by Gregg R. Allison. Most non-Evangelicals and Evangelicals happen to be in the same boat when it comes to an alleged evangelical ecclesiology: everyone seems to think it doesn’t exist. Guess what? That’s no longer something an informed person can say. Obviously it’s painfully ignorant of the Reformers, but it’s also ignorant of a great book that came out last year – Sojourners and Strangers. Though this is an evangelical ecclesiology that tends to line up with baptistic and mildly reformed perspectives, it has much to offer us. For my part, it’s my favorite ecclesiology that’s out there, even though I don’t agree with all of Allison’s views. I appreciate how well it’s written, how it interacts with common ecclesiological ideas found in other traditions, and presents a variety of ideas while critically engaging opposing views. One can’t ask for much more from an author!

#4: Post-Charismatic 2.0: Rekindle the Smoldering Wick by Robby McAlpine. Many years ago I was pointed to Robby’s blog by the infamous Tall Skinny Kiwi. Though I was convinced that Cessationists arguments are impossible to defend using the Bible, I was pretty disillusioned by the abuses that I saw within some of the charismatics I either saw, read, or heard about. It’s funny how we often allow the minority to determine our perspective on the majority. At any rate, I stumbled upon Robby and heard he had a book that addressed some of the concerns I had. Unfortunately, the book was out of print and every time I’d try and buy it, I couldn’t find a copy. And it wasn’t on Kindle!!!!! Somewhere along the line, Robby and I connected and became social media buddies (I was even given the opportunity to read his excellent Genesis Cafe before it came out and I’ll be reviewing that here at ThinkTheology.org this January so get off my back Robby!). Anyway, Post-Charismatic 2.0 is fantastic. It’s a fantastic summary of the pentecostal/charismatic movement that is both balanced and challenging. Rather than giving up on the charismata, Robby encourages readers to think theologically and to pay attention to the warning signs that often appear when people are being either stupid or sinful (or demonically inspired?). I want all of my charismatic and non-charismatic friends to read it. So after years (literally), I am glad to own a copy of Post-Charismatic 2.0… and what’s best is that it’s on my Kindle, a nod of approval to the subtitle about our need to rekindle (I need to also state for the record that I love the cover photo, so major kudos to Wendy).

#3: Kingdom Come: The Amillennial Alternative by Sam Storms. I’m still in the midst of reviewing this book here at ThinkTheology.org, but I can go on the record as saying that I’ve loved reading it. I read Hoekema’s The Bible and the Future many years ago and enjoyed much of it. Clearly my historic premillennial views had much in agreement with Amillennialism, especially in relation to concerns I have with Dispensational Premillennialism. With Storms’ Kingdom Come, it’s clear that there’s a better introduction and substantial arguement for the Amillennial perspective. I love reading Storms because he writes with an awareness of biblical and theological concerns. His writing is not simply exegesis or simply theologizing; it’s the combination of both. Kingdom Come is one of those books that I’m fairly certain I’ll read several times in 2014 and probably subsequent years as I wrestle through my eschatological views.

#2: Five Views on Biblical Inerrancy ed. by Merrick and Garrett. With contributions from Mohler, Enns, Bird, Vanhoozer, and Franke, you know this is going to be a phenomenal book. Why? I’ll cut to the chase: Bird and Vanhoozer. It’s not that the other contributors don’t have something unique and important to offer; they do. It’s just that Bird and Vanhoozer are the most correct (ha ha ha!). I personally love these Counterpoints books because I love reading how differing biblical/theological views interact. In Five Views on Biblical Inerrancy you have views that are often classified as being on the right and the left as well as views in the middle. Though there isn’t specifically a history of the doctrine of inerrancy in its truest sense, the essays representing each view and the editors contributions provide some good insights into the development of inerrancy as well as a path for moving forward. This is my second favorite book of 2013 and truth be told, I read it in one night. That’s how good it is. Go Michael Bird and Kevin Vanhoozer! Bird, by the way, is fast becoming my favorite author these days. Which brings me to my #1 book of 2013… 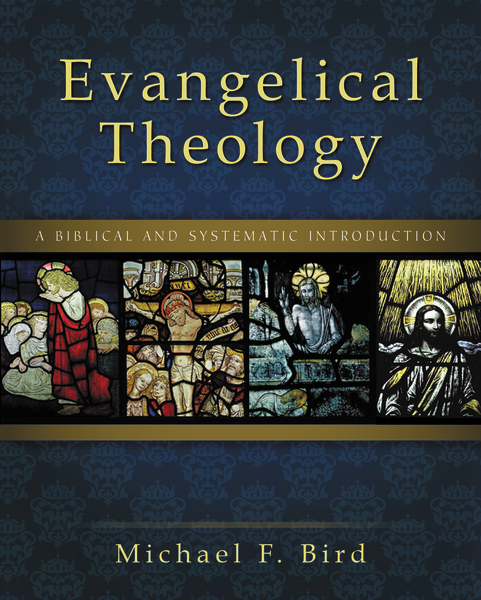 #1: Evangelical Theology: A Biblical and Systematic Introduction by Michael F. Bird. Back when I read Bird’s JETS article on Piper and Wright (review here), I became aware that Australia has something extremely significant to offer… and I do mean significant. Then I heard he was writing a systematic theology… as a biblical scholar! Oh boy. Evangelical Theology is incredible. I almost cried when I started reading it… kidding, of course! But I have loved this work so much. What’s not to like about a guy who is broadly reformed in the non–five-point-fundamentalist-calvinist sense who is not a Cessationist, is Historic Premillennial, and argues for dual baptism?!?! And did I mention that Bird is hilarious?!?! Apparently it’s okay to include comedy in theological works… finally. One of the other things I enjoy most about Bird’s Evangelical Theology is that he uses a “Gospel-Driven Theological method” and keeps the evangel front and center. Plus, after the normal prolegomena, Bird starts with the Triune God and then goes to the Kingdom of God. What’s there not to like about that? Especially if you are a Vineyard type of Continuationist like me!

So that’s it. Those are my favorite books of 2013 as of this moment. As honorable mentions, I also enjoyed Molly Worthen’s Apostles of Reason, Philip Jenkins’ The Next Christendom, Tom Nettles Living by Revealed Truth (thanks to Able!), Jordan Seng’s Miracle Work (I will review this soon, I promise!!!), and James K. A. Smith’s Imagining the Kingdom (truth be told, this should be in my top ten books!!!! What’s wrong with me?!?!).

As you can probably tell, I read a lot about Evangelicalism this year… and I’m really glad that I have a better understanding of this movement/ethos and look forward to further studies. 2014 will be concerned a lot with hermeneutics! It’s hard picking favorite books because I actually feel like I’m “cheating” on some really great books that I courted in 2013… but alas, you can’t pick them all, right?

What do you think of these books? What has been your favorites of 2013?