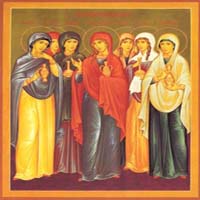 My “preacher’s-kid” wife MaryJo has occasionally recounted the story of when, as a young girl, her father asked her; “What do you see yourself doing when you’re older?”

She recalls that she closed her eyes, and saw herself among many people, teaching the Bible, praying, and caring for others in the setting of a local church.

Her father exclaimed, “That’s wonderful Jo.  That’s probably a pastoral burden.  It’s likely that you have a pastoral gifting!”

At that point, MaryJo says, “I burst into tears and said – ‘then my vision must not be from God because he can’t use women as pastors.’”

Apparently that was something she had heard growing up around folks in church, perhaps coupled with her own personal understanding of texts that she had read in the Bible as a child.  Thankfully, my wife’s father was able to walk her through the Scriptures, and demonstrate God’s high calling, esteem, and enfranchisement of many women in the plan of God– and encouraged her to pursue her gifts and burdens, and let God work out the details in His time and in His way.

I, on the other hand, was not raised in a Christian home, and became a believer at age 17.  I came into my faith without being weighed down by any prejudice or pre-dispositions about where women fit in to God’s redemptive plan, or the community of believers – the Church.  It was not until a few years after I was a believer that I heard teaching that seemed to marginalize women in various ways – complete with plenty of Bible verses that seemed to be teaching what the preachers were emphasizing.  I was never quite convinced that their conclusions weren’t without ulterior motives (at worst) or interpretive errors (at best).

I have also, on many occasions, read in books, heard in television shows, and observed in discourse with others who may reject “Christianity,” that one of the reasons for their rejection is the supposed “chauvinistic, paternalistic, misogynistic, oppressive-toward-women,” nature of the Christian faith.  In fact, one of the girls that I dated before meeting my wife, MaryJo, confided that she struggled accepting various aspects Christianity (especially in the context of congregational life) because when she read some of the things contained in the Apostle Paul’s letters, they reinforced her fear that she would be marginalized at church, and would not be given the opportunity to truly excel as a person by following the “Christian God.”

Stories like this abound, and are likely more numerous that we can even imagine.  And stories like this are also one of the reasons why I am doing this three-part series on all the women in Luke’s Gospel. Here’s where I’m headed:

1. I will provide a basic overview of Luke’s inclusion of women in his gospel narrative (here is pt. 1).

2. I will provide a brief summary of the various types of women in Luke’s Gospel (here in pt. 1).

3. I will provide some detail about several categories of women in the narrative (the emphasis of pt. 2).

4. I will end the series with my personal application as a result of my reading of Luke through the lens of Jesus’ ministry to women (the emphasis of pt. 3).

The Inclusion of Women in Luke’s Gospel 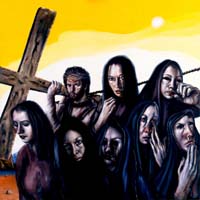 The first woman mentioned in Luke’s Gospel is found in Luke 1:5, in the first verse after Luke’s introduction to Theophilus.

Elizabeth, the elderly and barren wife of an elderly priest, is found in the temple courts praying while her husband was serving at the altar of incense.  She is described by Luke (along with her husband, Zechariah) as a person who was “righteous before God, walking blamelessly in all the commandments and statutes of the Lord” (Lk. 1:6).

There is hardly a more positive, affirming, or favorable description of any woman (let alone any man) in all the pages of the Bible.

From his mention of Elizabeth in chapter 1 to the end of his Gospel, Luke mentions no less than 28 individual, groups, or types of women.  Women are mentioned in 17 out of the 24 chapters in Luke’s Gospel.  In fact, based on my reading of Luke, there is some type of allusion to, an outright mention or description of, a narrative account about, or even teaching involving women (such as in parables told by Jesus) in one way or another in no less than 173 verses out of the 1,151 verses in the English Standard Version.  That is almost exactly 15 out of every 100 verses that contain some mention of a woman or women in only one book of the Bible.

The inclusion of women in Luke’s Gospel is one of the central facets of his message about Jesus, and a key to understanding the mission of Jesus.  Women are not merely included in Luke’s gospel without purpose, but rather, Luke intentionally included them in order to deepen the theological impact of his overall message.

The types of women mentioned in Luke’s Gospel cover a fairly broad spectrum of generational, marital, social, economic, religious, and moral variations, while the category or classification of being a “woman” is common to all of them. There may be a better way to divide or categorize the various types of women in Luke’s Gospel than what I have done, but the following nine categorizations of women was a helpful way for me to more deeply and carefully consider Luke’s frequent inclusion of women in the gospel.

Tomorrow, I’ll be posting a survey of every one of the women in Luke’s gospel along the lines of these nine categories.  In the meantime, I’d like to ask you to reflect on a couple of questions with me in the comment section below:

1. Do you think I’m making more of women in the Ministry of Jesus (and in Luke’s Gospel) than I should?

2. What’s your own experience with the broader issue of women in Gospel ministry?

3. Anything else as we kick it off?

By the way – Parts TWO and THREE are ready to read, so enjoy!