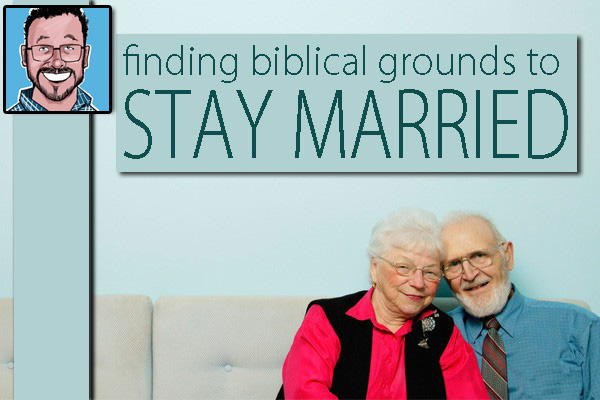 Two weeks ago I met with an emerging leader in our church to discuss his coaching process for ordination in our denomination. As we worked through the practical implications of our denominational credal statement, we came to item number 19 which reads…

“19 – We believe in divorce only on New Testament Scriptural grounds”

As we discussed this issue, he had a strong push-back against the commonly held idea that the “scriptural grounds” for divorce in the New Testament is adultery. It was his sense that the best way to interpret pornea was “incest,” and that most married couples don’t have that issue as a qualifying reason why they have grounds to divorce.

Without going into too much detail here about the idea that the word pornea covers all kinds of sexual immorality (and not just adultery and incest), I appreciated what I interpreted as his desire to set the bar very high for Christians who are looking for a way out of their marriage covenant.

The issue of marital fidelity came up for me in two other ways in the days that followed my meeting with my friend, and I wanted to share them here in conjunction with that initial discussion.

The first way in which the topic came up for me is in a seminary class I’m taking called Discipleship and Ethics.  A part of the course material on sexual ethics and marriage, we listened to a Mars Hill Podcast (not affiliated with any Mars Hill Church) wherein sociologist Andrew Cherlin revealed some interesting factors contributing to the high divorce rate in the United States (including among professing Christians).

At the center of the issue, from Cherlin’s research perspective, was the American ideal of personal happiness, satisfaction, and personal enjoyment.  This value, Cherlin believes, is driving the divorce rate in America. Thus, if people are simply not happy, not “getting anything out” of their marriage, or feel unfulfilled, they will often end the marriage in the same way they think of other kinds of experiences, products, pastimes, churches, etc.  More on this in a moment.

The second way in which the topic emerged for me was that I went home last week for my father’s funeral.  Interestingly, we held the funeral in the same social hall where just four years earlier we celebrated my parents’ 50th wedding anniversary. Fifty years!

My dad died when he was 75, and had just celebrated his 54th anniversary with my mom two months ago.  Interestingly, my dad was not a professing follower of Jesus Christ, and I know for a fact that there were many marriage struggles between my parents.  I also know that my mom and dad both had long seasons of marital dissatisfaction, but in all those 54 years, they never separated and were never divorced.

There are a few things that my mom told me last week that held them together. For instance, their vows. They simply made a commitment to remain together, and my mom said they were not the kind of people who break their word.  Also, my mom said, “You kids!”  In other words, my parents were raising a family, and they felt that it would be destructive to us if they were to let their marriage fall apart. Third, my mom mentioned her own parents. She was the child of divorce, and my dad was the child of an alcoholic mother who died when he was young. They wanted to break these cycles in their own marriage. Again, they were not Christians.  The last reason my mom shared was, “Hey you make your bed, you sleep in it. We figured our problems were ours to deal with, so we dealt with them.”

I always saw these virtues in my parents, but my mom put them together for me in a very simple way.

Over the past twelve years of senior-pastoring, I have seen a few members of our congregation get divorced. To be honest, most of them had reasons that could have been dealt with. I always like to say that a married couple “usually has biblical grounds for reconciliation, forgiveness, and healing.” But – as I heard in the Mars Hill interview – many of the couples I know who got divorced felt that they were not happy, were discouraged by their own failure, or the failure of their spouse, and would rather just get a divorce and start over than work (work work work) on the healing of their marriage.

I realize right here that the above paragraph may provoke a number of “What if this happens?” questions, and I definitely have seen some “what ifs” in my own experience – so perhaps we can save those for the comment section.

I have seen many professed Jesus-followers stop following Jesus with respect to their marriages, in favor of a “God want’s me happy” religion that let them justify marital dissolution. My parents were not members of that religion (or any religion) and they stayed together for 54 years!  It’s so interesting to me.

My hope is that we can help followers of Jesus live with greater commitment to one another than people in the unbelieving world have.  Our faith is in the man who said,

“If anyone wants to be my disciple, he/she must deny ‘self’ – take up his/her cross every day, and follow me.”

That cross-carrying ethos must impact our marriages too. What say you?