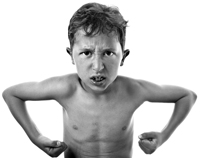 Men have problems!  I know, because I am a man, and… I have problems.  I also find myself working with men quite a bit because of my pastoral role in our church.

I have two confessions about this: (1)  I empathize greatly with men as we work through our shared struggles, and (2)  I find myself increasingly frustrated by the tendency of men to respond poorly when they (we) need to deal with our failures and weaknesses.

Over the course of my life, I have discovered that most men struggle with a cluster of problems that are inter-related, and stem from a warped concept of true masculinity.

I see three basic patterns emerge as men give in to the sin-nature that attaches to the male identity:

1.  SYSTEM-FAILURE (Passivity):  Many men become discouraged with themselves, and give up trying to understand and overcome their weaknesses.

This often results in a passive response to pressure or problems that is seen in; frequently shirking marital or parental responsibility, laziness, lack of motivation and follow-through, failure to keep commitments and covenants, carelessness with money and financial management, and basically giving in to illegitimate urges when faced with difficulty.

2.  HYPER-DRIVE (Machismo): This response is the polar-opposite of passivity.  In an effort to over-correct our often-felt sense of inadequacy, many men over-play the male role to the point of becoming oppressive and super-dominant.

The word “macho” or “machismo” is often used to describe this greasy, grungy, loud, pushy, dominant “do-what-I-say-cause-the-bible-says-submit-to-me-woman-and-make-my-breakfast-right-now” kind of man.

3.  WIRES-CROSSED (Feminization): Some men respond to their own confusion about masculinity, and the deep voids in their understanding of manhood by adopting a feminized role.

The machismo-guy would call this fellow a “girly-man” because he is SO in touch with emotions and feelings, and may even lapse into sexualized relationships with other men.  This can be based on a bent attempt to connect intimately with men in order to understand what it means to be a man.

When relationships with other men become sexualized, the male identity becomes even more obscured and difficult to find.  It doesn’t help that the entire culture seems to celebrate the feminization of men as progress.

I have found that many men who are struggling with their own sense of manhood and masculinity have “daddy-issues.”  What I mean is – they (we) have not sorted out what we have learned (or did not learn) from the primary man in most of our lives; our DAD!

Careful!  This is not a “blame my daddy” session.  But it is an attempt to help men understand the powerful influence of a father on our own concept of masculinity.

Many men are subconsciously living in reaction to the concept of manhood that they learned from their father.

If daddy was a passive wimp, we may embrace his imbalance, or swing the other way and become oppressive.

If daddy was oppressive, we may imitate what we saw in him – or be so beaten-down that we become passive.

If daddy wasn’t there, or was abusive or unresponsive, we may leave it up to moms and sisters, or even older men with corrupt motivations to shape our image of manhood – and become feminized.

Many young men struggle with authority figures because of “daddy issues.”  Some men expose their daddy issues by being unsubmissive or even rebellious against authority figures.  This is a subtle way of telling “daddy” – “You can’t control me!  I’m my own man!”

These relationships may end in a blow-up where the younger man attempts to assert himself in the relationship in an overt and destructive way.

Others relate to authority figures by constantly attempting to earn approval and praise.

The need for approval manifests in twisted ways as the younger man constantly asks “how am I doing?” or becomes overly-discouraged at any hint of correction or disapproval from the current “daddy” figure in his life.

These relationships become unhealthy very quickly.  In some ways, the young man in the relationship may actually be trying to get himself rejected because he has come to believe that he cannot be accepted and loved in spite of his weaknesses or insecurities.

When I was younger I tended to model the second imbalance in my relationships.  Over time, I actually came to resent the rejection that I “pulled out” of authority figures, and became resitant to authority – believing that I was being treated unfairly.

That is not to say that some of my authority figures didn’t have their own problems; but my “daddy issues” made the relationship-chemistry worse than it would have been if I had come into the relationship as a secure man.

In the next two posts I will be looking at; (1) the “father-influence” from five different biblical angles to try to help men adopt healthy ways of responding to our own “daddy issues,” and (2) what the Bible says about “becoming a man” and how that actually happens.

For now, I pray that any man reading this will take time to talk to God THE FATHER about your own journey into manhood and the struggles associated with it – and to Jesus – THE PERFECT MAN about how to be healed in any area of brokenness in your life.

I invite you to jump into the comment section below. If I can help you to minister to the men in your church in any way, contact me here and let’s begin a dialogue.