You Should Ask Jesus if You Can Drink Alcohol. 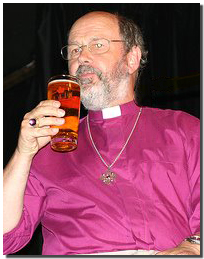 Okay, let’s kick it off with an N.T Wright quote, and a complementary picture of him drinking a pint of beer to give me a bit of credibility before I jump in here…

“First, temptation always takes as its starting point something which is in itself good. The dualistic division of the world into good things and bad things simply won’t do. There is such a thing as a distinction between good and evil, but we can never get at it by expressing it in terms of different parts of the created world.

Chocolate is the creation of the good and loving God, just as much as bread.

Sex, despite what you’d think to hear some people talk, was God’s wonderful idea all along.

Alcohol is such a great thing that Jesus once went to a wedding and made lots more of it.

The human emotions, especially those of falling in love, are so wonderfully important that an entire book of the Bible is devoted to exploring and celebrating them.

It would be bizarre if following the Jesus who made more wine for a wedding meant automatically renouncing alcohol and sex.

Is that dangerous talk? Only for a dualist, who wants everything black and white.

A serious Christian will realize that sin comes not in the thing itself, but in its wrong use; not in a part of God’s good creation, but in the attempt to use that good creation as though it were our toy, or our trash.”[1]

Teaching My Son about Alcohol — And Following Jesus

This excerpt from Wright’s book about “Following Jesus” reminds me instantly of a conversation I had with my son about four years ago. My wife and I were talking with him about alcohol. He asked about it because I received some wine as a Christmas gift (from a member of our church), and when he asked if he could have some, I said —

Of course, his question was,

“What’s alcohol and why can’t I have any?”

For the next several days, on the way to school, my son and I would talk about everything I could think of surrounding the subject of alcohol.   During one of our exchanges, my son asked —

“Dad, when I am an adult like you, can I drink alcohol? When I’m old enough, I mean?”

You may disagree with, and think less of me for what I said next, but from my understanding of, and commitment to  following Jesus (who made lots and lots of alcohol at a wedding, and was himself called a drunkard because, well, he drank alcohol – Jn. 2:9-10, Lk. 7:34), I gave him the most biblical answer I could think of. Here’s what I said.

“Victor, when you are old enough to drink alcohol, it is possible that you still should not drink it. However, it is also possible that you may, and you’ll be okay.  You will have to ask Jesus about that when you get to that place. I am not going to give you a legal code to obey. We follow Jesus. Jesus knows how to live in the world as a human being. He will teach you. If you’re following Jesus, he will tell you whether you should or should not do things, but it will not be because Jesus has rules that you must obey. It will be because Jesus knows you, and he knows your strengths and weaknesses.  In the meantime, mom and I will also try to set a good example for you so that you will know that if you do drink alcohol when you’re old enough you are not to become drunk or addicted to it. If it’s possible that you might, then Jesus will tell you not to drink it, and you will have to listen to him. But son, Jesus knows you better than me. He’ll tell you what to do.”

Okay, no kidding, there’s my actual answer to my son, who I love — after he asked me about alcohol. At this point in his life, he follows the rules about Alcohol prescribed by the law, good sense, and good parenting. But at some point, when he is old enough to venture into the world on his own, and when the rules about drinking alcohol change, he will still have to follow Jesus, and Jesus will tell him whether or not he should drink alcohol because Jesus knows Victor. And if Victor knows Jesus, then he will listen to Jesus’ voice.

The Realm of Personal Conviction, Conscience, and Weakness

In my case, I neither have a conviction that “alcohol is evil and should never been consumed by a Christian,”  nor an addiction (or propensity toward addiction) to alcohol. I have asked Jesus about it many times over the course of my life. There have been times, for a variety of reasons, where I felt strongly that Jesus was telling me not to drink alcohol, and other times where there was no prohibition from the Lord to me about it, except that I would never either drink alcohol in front of a person who had a problem with it, or offer it to anyone who may have a conviction that is different from mine.

Some people might say, “Well by talking about it here on this blog, you might as well be having a drink in front of everyone.” Not so! On this blog I am talking about what it means to follow Jesus, and encouraging people to listen to his voice about this and everything else.  In fact, I’m sure that many people who will read this will be strongly convicted, as they listen to Jesus, that they should not drink alcohol, and so while I have shared that I do, they will know that they should not. That’s what following Jesus is about. It’s a relationship! It’s not an arbitrary code.

I have an old friend who, when he was much younger, was addicted to alcohol. In fact, I spoke to him less than a week ago about this very thing, and he said,

“I have not had a drink in thirty years. I can’t. It’s too dangerous, and I know what will happen to me if I do it, so I don’t do it.”

That man is following Jesus. Jesus knows him, and he knows himself.

No rule about alcohol is keeping my friend out of alcoholism. His commitment to following Jesus is!

This past Monday night, a friend of mine in the town where I live called me in the evening and asked if I had a few minutes to talk. As he shared with me, he confessed a long-standing addiction to alcohol, and shared stories of many painful things that had happened to him as a younger man. He was using the alcohol to mask his pain, and it was destroying his life.

In his case, he has no business having anything to do with alcohol, any more than my eleven-year-old son does. When my friend asks Jesus if he should drink Alcohol, Jesus will tell him no, and it’s not because he’s a Christian, and good Christians don’t drink alcohol. It’s because he has a problem with alcoholism, and Jesus wants to deliver him from it. That will mean that he cannot and should not drink alcohol.

Not a Question of “Law,” But of Love and Lordship!

I hope you’re getting the idea here that I do not believe the question is settled by a rule or a law. It is settled through Lordship.  That’s why you should ask Jesus if you can drink alcohol (or not). He will tell you.

The only “rule” about alcohol for followers of Jesus, if you like that kind of thing, is Eph. 5:18.  Paul told Timothy that elders in the church of Jesus are not to be drunkards, and deacons are not to be “addicted to much wine.” (cf. 1 Tim. 3:3, 8). He also told Timothy (in the same letter) that he should drink wine, because doing so would help him with whatever his physical ailments were (cf. 1 Tim. 5:23).

At this point, some poor person will want to tell me that the wine Paul was talking about was really more like grape juice.  That mistake could be the subject of an entirely different post, so let me just make this point by asking a question.  How does one get drunk on grape juice?

If the “wine” in 1 Timothy and Ephesians (which was not to be used to get drunk) was grape juice, then I don’t understand what Paul is saying.  I’ve never tried it, but I’m not sure just how much grape juice I’d have to drink before I got drunk. Further, if it was grape juice, then try changing the word “wine” to grape juice every time it appears in the New Testament, and see if the text makes more sense.

No. The wine Paul was talking about was not grape juice. It was fermented wine that could get a person drunk. And there is no arbitrary or all-encompassing commandment from Jesus, from Paul, or from any other New Testament writer for that matter, to abstain from Alcohol. If there were, be sure that John and Luke (knowing as they would have, that good Christians never drink alcohol) would never have mentioned Jesus’ miracle at the wedding at Cana, or the repeated slur that because Jesus drank alcohol, he was a drunkard.  There is a dramatic difference between those two things in Jesus’ life, and in the New Testament references to drinking. It is my conviction that the same difference should be reflected in how we discuss it as followers of Jesus.