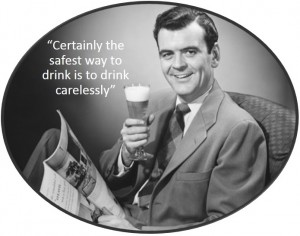 One of my favorite articles on drinking Alcohol comes from the great mind of G.K. Chesterton. In one of the articles (Wine When it is Red) from his book All Things Considered Chesterton says…

Let a man walk ten miles steadily on a hot summer’s day along a dusty English road, and he will soon discover why beer was invented.

I couldn’t agree more. I want to make four comments/points regarding some of  my favorite portions of Chesterton’s article.

If it is true, as I surmise, that “alcohol” is a word of the Arabs, it is interesting to realise that our general word for the essence of wine and beer and such things comes from a people which has made particular war upon them… It is quite a mistake to suppose that, when a man desires an alcoholic drink, he necessarily desires alcohol.

Cultural gatekeepers can regulate modesty in immodest ways. When Howard Hughes built The Hercules its wingspan was the largest of any plane in history and still is. You might know the plane as “The Spruce Goose”. Though The Hercules was almost entirely made out of birch it earned the monicker “Spruce Goose”.

It would be tough to make something positive, catchy and fitting from the word birch. Similar to the ‘Spruce Goose” it is a bit misleading to call beer, wine etc alcohol when so little of the content is actually alcohol. If a guy was trying to make a catchy positive phrase for Howard Hugh’s beast of a plane he succeed.

But this brings up an interesting thought concerning alcohol. The catchy and negative tag “alcohol” reveals the prudish intentions of the gatekeepers who coined it. When a drink containing 4-14% alcohol falls under the broad brushstroke of “alcohol” it doesn’t seem to indicate a very modest painter. If those moral people of influence who coin phrases did in fact use the alcohol label to cover everything containing alcohol we should take note.

Those who have positions of moral influence (and otherwise)  in our communities in a large and small sense can be rather immodest when it comes labeling something. Their motives are not always entirely “non alcoholic”.

A person does not have an alcohol problem they have a human problem.  A person might become drunk on alcohol but alcohol will never become a person through being consumed. I kinda feel bad for alcohol it probably just wants to be left alone. It seems to get blamed for a bunch of stuff that its never done.

In my mind alcohol is more like a mirror than a monster. What a person does with the reflection alcohol affords them is an issue of liberty and responsibility. The irresponsible application of abstinence toward alcohol by Christians is probably more the child of  libertine bondage  than true liberty which is bound to the freedom in Christ.

A person’s motive in drinking is important. My motive for my children being involved in sports could be to live vicariously through their experience.  Just as our motives when raising and enjoying our children can be off a motive for drinking can be off as well. As a father it would be easy for me to place my child in sports so that I could relive the “glory days”. Our intended use of the drink is more important than what we are drinking. We could be using alcohol as a functional savior or our motives for drinking could be to cope with life.  Alcohol could easily become a heart idol if it is used to save us from reality and help us cope. I think this also works the other way around. I can respect a persons motive for not drinking as well, especially if they have had abuse or addiction as a dominant narrative in their life’s story.

Christians do not have corner on the market when it comes to defining sensible behavior. Believe it or not we live in a pretty sensible world. Rules, laws and morals define every aspect of what it means to be a social human being.

When we live out what it means to follow Christ we have not simply been called to a moral life we have been called to reshape our already existing moral life under the reality of King Jesus. We have  more moral common ground as image bearers with those who live life under the lordship of something and someone else than we would like to admit sometimes.

The only people that think bars and pubs are full of only alcoholics and drunks have never really spent much time in one or they have spent way too much time in one. On this issue of alchohol (in our spritual infancy) we can have a tendency to be brainwashed by Christian folk who naively think church buildings are full of only Christians. We can bury our head in church culture sometimes so far that after a while we can only imagine what it’s like on the outside. To imagine a bar or pub as a place without sensible behavior is to let ones imagination get the best of them.

As usual Chesterton offers us a balanced view of reality via his use of paradox. Now where is my beer? Cheers and be responsible. If you find that you can’t be responsible don’t blame the alcohol.

Scripture to think about…

Psalm 78:65. How would the Psalmist know what this is like? What would the cultural view of wine and it’s consumption be if God is compared to a warrior awaking to judgement as if he had a hangover?

Proverbs 4:23.  What role does the heart play in drinking irresponsibly?

Isaiah 25:6. The wine spoken of here is potent. Both its strength and flavor would make it good wine worthy of God’s kind of celebration party (John 2:1-11).

Now read what Kenny and Luke have contributed to the wider discussion, and be sure to add your voice to the comments below.  We invite you to think about this with us.

Prayer is as natural an expression of faith as breathing is of life.