“Against the Gods,” by John D. Currid

When was the last time that polemical theology was encouraged? It seems as if polemics, a strong verbal or written attack on someone or something, has become quite unfashionable. I recently participated in a conversation on Facebook where several commenters suggested that Christians shouldn’t name theological errors or people who teach them. This is, of course, not something that even the biblical authors observed. After all, the Apostle Paul wrote,

“I appeal to you, brothers, to watch out for those who cause divisions and create obstacles contrary to the doctrine that you have been taught; avoid them.” (Rom. 16:17; cf. Phil. 3:17-21)

Paul, under the inspiration of the Holy Spirit, also named names in 2 Tim. 2:16-18. Yes, I’ll readily admit that the word “heretic” gets thrown around for some of the silliest and most secondary issues (e.g., eschatological positions), but it’s simply incorrect to hold to the view that no one should ever participate in polemics… which brings me to John D. Currid’s Against the Gods: The Polemical Theology of the Old Testament. 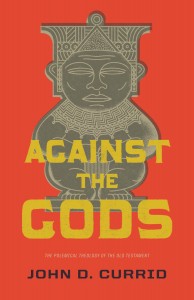 Dr. Currid is a well known Old Testament scholar and archaeologist who teaches at Reformed Theological Seminary and Against the Gods is an excellent introduction into the way that the Hebrew Scriptures relate to the ancient world’s surrounding. Did the biblical authors borrow ideas from their neighbors and if they did, was it with or without critical thought?

The book begins with “A Brief History of Ancient Near Eastern Studies,” which, quite frankly, was extremely captivating. This is partly due to the fact that my educational background does not include a significant amount of study on the subject but also because Currid writes in a very readable and engaging way. Currid writes that “prior to 1798, the world’s knowledge of the history of the ancient Near East was principally derived from the Bible and from some early Greek writers who preserved some aspects of it in their own histories” (p.12). Throughout the rest of this “brief history,” Currid provides helpful historical details related to how historians previously had only a few sources to historians finding hundreds upon hundreds of sources. This was a time when, as Currid writes, “there was a sense of innocent discovery” (p.15). Yet this was all about to change when, in 1873, “George Smith announced that he had discovered an Assyrian account of the flood” (p.16). Thus, the period of suspicion began.

The first chapter closes by noting that modern scholarship now views the relationship between the Old Testament and ancient Near Eastern civilizations (ANE) with “deep cynicism” (p.22). This seems to include both evangelical and non-evangelical scholars, as Currid mentions both Peter Enns and John Walton as examples. Yet, as Currid will argue, “many evangelical Old Testament scholars emphasize the similarities and parallels between ancient Near Eastern literature and biblical writings, and they do not recognize, to any great degree, the foundational differences between the two” (p.23).

Chapter two, “The Nature of Polemical Thought and Writing,” is a helpful chapter for theological students. First, he provides a definition for his use of the term “polemical theology”:

“Polemical theology is the use by biblical writers of the thought forms and stories that were common in ancient Near Eastern culture, while filling them with radically new meaning. The biblical authors take well-known expressions and motifs from the ancient Near Eastern milieu and apply them to the person and work of Yahweh, and not to the other gods of the ancient world. Polemical theology rejects any encroachment of false gods into orthodox belief; there is an absolute intolerance of polytheism. Polemical theology is monotheistic to the very core” (p.25, emphasis his).

“The primary purpose of polemical theology is to demonstrate emphatically and graphically the distinction between the worldview of the Hebrews and the beliefs and practices of the rest of the ancient Near East” (ibid.).

WIth this definition and purpose of polemical theology, Currid demonstrates, convincingly, that the OT contains examples of the subject in hand. A well known example is the use of the phrase “Thus says…” in relation to the words of Yahweh in comparison to ANE gods.

The rest of the book examines a variety of Old Testament passages in relation to the alleged corresponding ANE texts and idea. This includes, among others, the biblical creation account in relation to what we read in the ANE literature, the story of Noah, and the parting of the Red Sea in the Exodus account.

Readers will need to carefully study the texts in question and consult the relevant literature to determine the validity of Currid’s arguments. In my reading, I think his overall point about the polemical theology of the OT stands, though his examples aren’t equally convincing. Another issue I found was that the author helpfully raises the question on how the biblical and ANE parallels are related, he doesn’t always answer that question. Yes, the question is one that I’ve asked many times as I’ve read the OT, but I think his introduction would have been more helpful to his intended audience had he answered that question clearly throughout the scope of his work. However, these are minor criticisms.

In my estimation, anyone wrestling with the Old Testament should read Currid’s book. As I noted earlier, it’s extremely readable and his arguments are convincing and well thought out. The footnoted references and secondary sources will also serve readers as they read further on the subject. Finally, Currid wisely notes that not all of the OT is polemical! This is, I think, extremely helpful. In fact, he writes,

“Polemical theology certainly does not answer every question about the relationship of the Old Testament to ancient Near Eastern literature and life. THere is much to that relationship that simply cannot be understood and explained by the use of polemics” (p.141).

Pick up a copy of Against the Gods and you’ll find a helpful introduction to the relationship between the biblical authors and the culture of the world they lived in. There is much to think about in Currid’s excellent introduction.